You are here: Home / Perspective / family and society / on teenage rebellion, part five 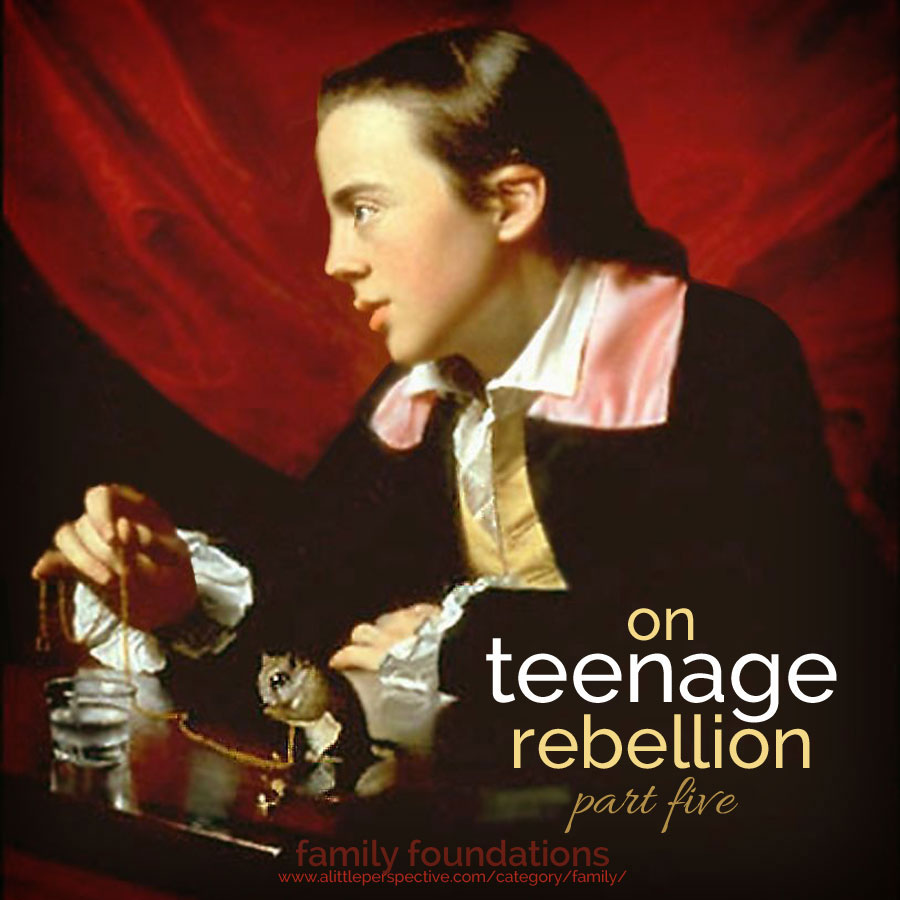 The Lord loves us better than we love our own children. He understands the importance of both nurture and admonition in bringing up children.

And you have forgotten the exhortation which speaks to you as to sons:

“My son, do not despise the chastening of the Lord, Nor be discouraged when you are rebuked by Him; For whom the Lord loves He chastens, And scourges every son whom He receives.”

If you endure chastening, God deals with you as with sons; for what son is there whom a father does not chasten? But if you are without chastening, of which all have become partakers, then you are illegitimate and not sons. Furthermore, we have had human fathers who corrected us, and we paid them respect. Shall we not much more readily be in subjection to the Father of spirits and live? For they indeed for a few days chastened us as seemed best to them, but He for our profit, that we may be partakers of His holiness. Now no chastening seems to be joyful for the present, but painful; nevertheless, afterward it yields the peaceable fruit of righteousness to those who have been trained by it. Heb 12:5-11

In the Scripture, when the Lord needs to correct His children, He first does so by instruction, and then only resorts to consequences if the children refuse to listen to His instruction. Instruction should not only involve a spoken command, as a parent, but also, sitting down with the child and showing them by example, how to do what it is they are to do. Be willing to instruct, and you will have less need for consequences.

I always told my children, “Learn by instruction, and not by consequences; for you will learn in either case, but being stubborn and choosing to learn by consequences is far harder on you.”

When children will not learn by instruction, then learning by consequences becomes necessary, in admonition administered properly. Father God as the perfect Father, is willing to allow us to learn by consequences. He allows us to experience suffering, if necessary. He has the power to instantly deliver from fiery trials, but most of the time He chooses not to – especially from those fiery trials which we bring upon ourselves by our own foolishness. That fire is sometimes the only way to release the dross from our hearts and lives, so that we will bear the peaceable fruit of righteousness in the future.

Don’t be afraid to admonish, parents. The Scriptures teach the torah of discipline, which is the pattern used by God, and as parents, we can follow that pattern with our own children, to achieve the greatest success.

Why don’t parents admonish their children? Fatigue, for one. It takes a commitment to consistency over the long haul to stay on top of it. Fear of rejection is another. Children can punish parents for chastening them, by withholding affection, or rejecting their parent. And there is nothing that hurts worse in the universe, than being rejected by the one you love the most. God did not give parents to children to be their best friends, however. Children desperately need their parents to be their parents and not their bffs. As parents, sometimes we have to bite the bullet, accept the rejection and do what is best for the child, and not what is best for us. We love them more than our own lives, and this is one way we live it out on a daily basis.

Even though children might punish their parents with rejection when they are admonished, their little hearts recognize, deep down, that being admonished rightly is an expression of love, as Hebrews states (“… for whom the Lord loves, He chastens,”). When parents let children go because of fatigue, or fear of rejection, a root of resentment or bitterness can grow up in the heart of the child, because they know, even if just on a subconscious level, that the parent is placing what is best for  the parent above what is best for the child.

The other end of the pendulum is admonishing too much; being too strict and too harsh. Some parents discipline their children for harmless childishness, as well as willful disobedience. When we do that, we have gone beyond the example of the Lord as Father, which can also open a door for a root of resentment to grow in the child’s heart. Abuse as well, is not the admonition of the Lord.

As parents, we will make mistakes. While we will nail the perfect balance of nurture and admonition at times, at other times, we won’t. When that happens, is go to your child, and confess your sin. Children have an amazing capacity for forgiveness, and such a living and honest relationship, based on love and grace, between parent and child, will not plant a seed of rebellion. ♥