You are here: Home / Perspective / books and poetry / o love of God

The love of God is greater far than tongue or pen can ever tell;
It goes beyond the highest star, and reaches to the lowest hell.
The guilty pair, bowed down with care, God gave His Son to win;
His erring child He reconciled, and pardoned from his sin.

When years of time shall pass away, and earthly thrones and kingdoms fall;
When men who here refuse to pray, on rocks and mountains call;
God’s love so sure, shall still endure, all measureless and strong;
Redeeming grace to Adam’s race—the saints’ and angels’ song. 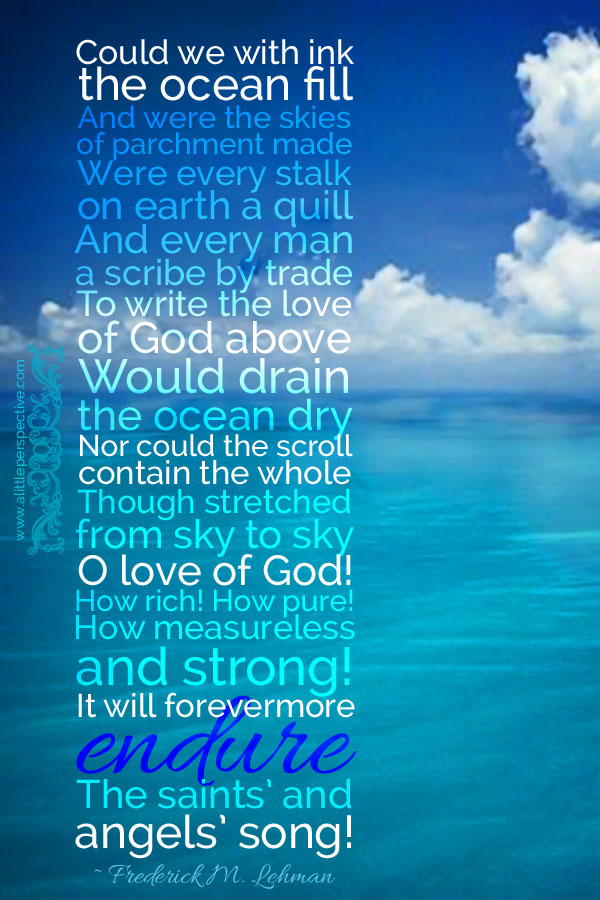 Frederick M. Lehman wrote the first two verses of this song. He was inspired by the third verse, “Could we with ink the oceans fill …” which he did not write. In fact, he wrote of it years later, that it “had been found penciled on the wall of a patient’s room in an insane asylum after he had been carried to his grave.” (It must be obvious that the patient thus locked up, was not, after all, insane.)

But even then, this verse is not original with the asylum patient. It turns out to be a verse from the Akdamut by Rabbi Muir bar Yitzchak of Orleans, France, who died in 1095. The entire poem is ninety verses long, and is traditionally read at the beginning of the Feast of Weeks (Shavuot) by Ashkenazi Jews.