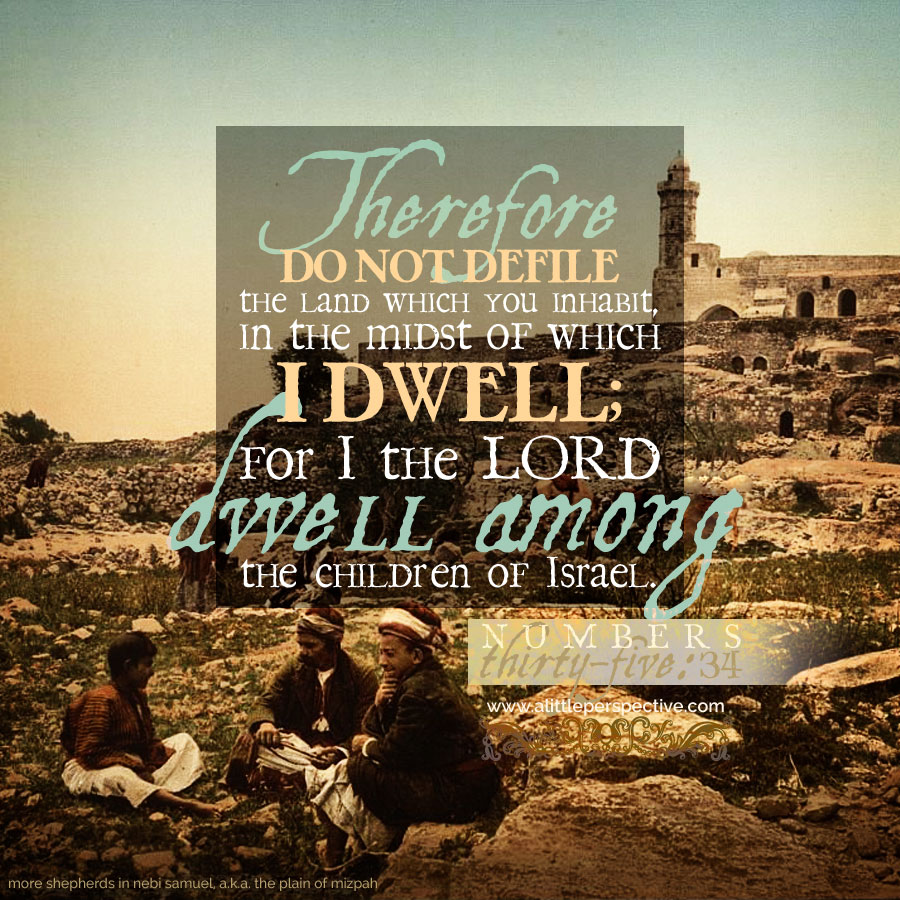 Read Numbers 35 and 36 at Bible Gateway.

Num 35:1-8 {p} Cities for the Levites among the tribes
Num 35:9-34 {p} Cities of refuge + distinction between murder and manslaughter
Num 36:1-13 {p} Marriage of the daughters of Zelophehad, so that his inheritance is retained

Today’s reading is part of a larger chiastic structure:

2c) Num 31:1-54, Moses shall be gathered to his people after taking vengeance on the Midianites;

Once again we see the Sabbath and annual feast days of the LORD highlighted in Torah, not just once, but over and over and over again, as a constant reminder of their importance (Sabbath pre- dates the giving of the Law, and even pre- dates the fall of man) and as an everlasting ordinance among the people of God.

We see the Lord emphasize, that once the promise of the land is GAINED by warfare among the people, the importance of RETAINING it, through obedience, justice, and wise dealing. We see the importance of making just atonement for shed blood. Even the laws concerning what is and is not murder, and the cities of refuge, concern just atonement for shed blood. For if someone were killed accidentally (manslaughter) and the avenger of blood — who is the victim’s close relative — were to shed the blood of the manslaughterer, that would increase unjust bloodshed on the land, not decrease it. Since manslaughter is not murder, to kill the manslaughterer is to add murder to the land. It is justice to give refuge to the manslaughterer, just as it is injustice to give refuge to the murderer.

Our own justice system would benefit greatly by being instructed and corrected from the LORD’s Torah. The incidents of murder would decrease dramatically when true murders were swiftly and justly atoned, and true manslaughters were given just refuge. Where are the prisons in the LORD’s system of justice? There are none. Capital crimes (murder and kidnapping for example, there will be more instruction on capital crimes in Deuteronomy) are punished by death, and thefts, frauds, and property losses are corrected by making proper restitution. Our “compassionate” system which imprisons non-capital offenders while leaving victims without recompense, and which gives refuge to capital offenders, again leaving victims without recompense, is not compassionate at all.

Now I can hear some of you saying, we have finally come to chapters in Torah, where Moses did not write about Messiah. Not so. 🙂

There are to be three cities of refuge on the west side of the Jordan, and three cities of refuge on the east side of the Jordan. Three is a sign of the Messiah in Torah! A city of refuge is a place to which someone who deserves death because of bloodshed, can flee and escape death. Escape from certain death is also a sign of Messiah in Torah, as He is the Resurrection and the Life! A city of refuge prophesies of Messiah, just as the Tabernacle prophesies of Messiah, and the Menorah, and the feast days, and the sacrifices, and the red heifer!

Who is the anointed high priest of our confession? Messiah Yeshua (Heb 3:1 – “Messiah” means “anointed one”). It is His death which releases all who are guilty and deserving death because of our guilt, from our deserved consequence. At His death, we are released!