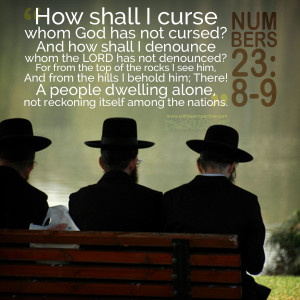 The chiastic structure reveals that it was Moab’s goal to curse Israel. They tried to do so externally first, using Balaam, but were unable to do so. YHVH had blessed Israel and there was no one on earth with the power to undo that blessing. So then Moab invited Israel, in essence, to curse himself, by forsaking YHVH and His commandments, and embracing idolatry and harlotry. This worked to a limited extent, because wrath came upon Israel, and the plague started among Israel. Israel whom YHVH has blessed, can now only bring the curse upon himself by his disobedience (Deu 28:15)!

But even though Israel voluntarily chose to be cursed through disobedience, it was not enough to bring about her destruction as Moab had hoped. The priest stopped the wrath, the curse, and the plague from spreading when he slew the source of the sin (Num 25:3-9). So although 24,000 died in the plague, the rest were spared. Messiah Yeshua is the High Priest of our confession, who is attending to His priesthood, that no more wrath fall upon Israel. ♥