The paragraph divisions and many of the smaller chaistic structures found in parashah korah are here. For several years I have been working on the chiastic structure formed by korah, and I am not yet wise enough to have it completed. I do know this: 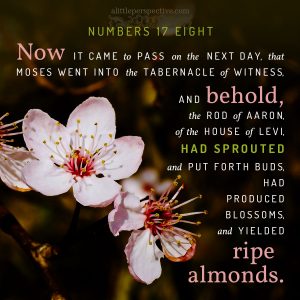 Num 16:1-50 forms the front half of the structure. It forms a chiastic structure by itself (see link above). Its theme is, The leaders and the congregation reject Aaron in his priesthood before the Lord.

Num 17:1-11 forms the central axis of the structure. It forms a chiastic structure by itself (see link above). Its theme is, Aaron’s rod that budded.

Num 17:12-18:32 forms the back half of the structure. The strong and weak paragraph divisions form smaller chiastic structures (see link above). Its theme is, The Lord confirms Aaron in his priesthood, and gives him what he requires to do his work.

Aaron as high priest is a type of Messiah. The leaders and the congregation of the children of Israel rejected Messiah also from mediating for them. But just as the dead stick of Aaron’s rod was placed in a box, and when it was opened, it was found to have budded with new life, bringing forth both flowers and ripe almonds, so the dead body of Messiah was placed in the tomb, and when it was opened, He was not there, but found to have been raised with new life. By this sign, the Lord puts away the complaints of the children of Israel (Num 17:10).

Then the Lord charges the high priest to attend to his priesthood, so that no more wrath may fall upon the congregation (Num 18:5). Sin carries its own consequences, and God does not want wrath to be upon His people. He would spare them! And likewise, we have been spared the wrath we justly deserve, because the High Priest of our confession has attended and is attending to His priesthood.

This entire parashah is prophetic of Messiah Yeshua, and I suspect that as I grow in understanding of the priesthood and its Messianic significance, I will one day be able to complete the structure formed by korah.