“Because all these men who have seen My glory and the signs which I did in Egypt and in the wilderness, and have put Me to the test now these ten times, and have not heeded My voice, 23 they certainly shall not see the land of which I swore to their fathers, nor shall any of those who rejected Me see it.” Num 14:22-23 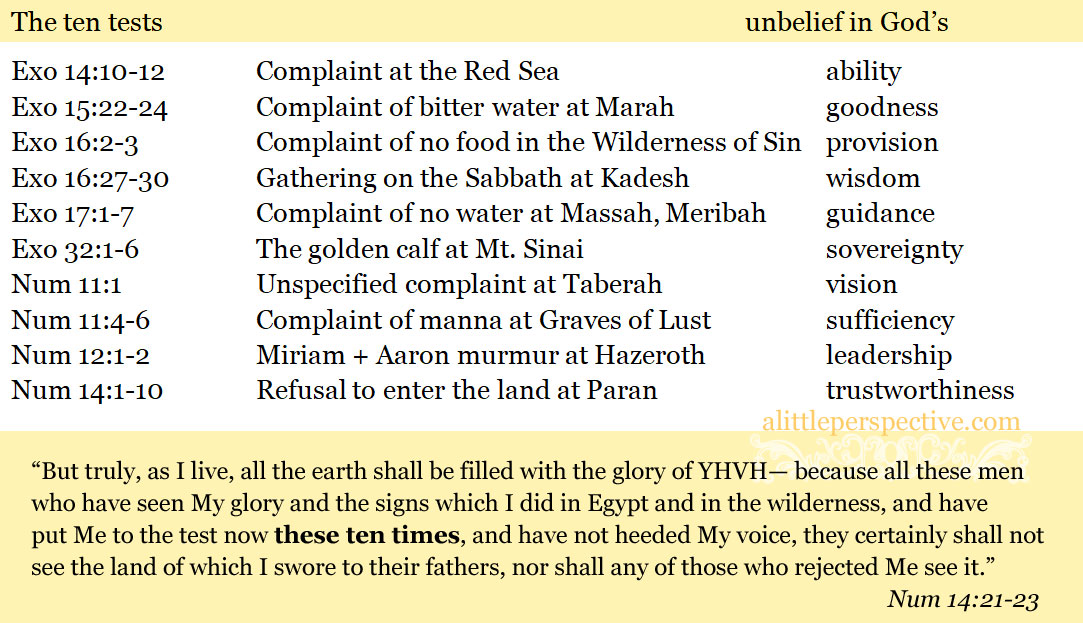 God is said to try or prove men by adversity, in order to reveal their faith or belief in His word or promise. Men, on the other hand, are said to prove or tempt God, when they doubt in His ability or His word.

TO TEST. Strong’s H5254 נסה nacah, “to prove, to test, to try;” that is, continuing to grab hold and lift up. The idea of proving comes from a test which was often undertaken to see if someone was worthy to be lifted to a higher position or rank.

Please notice that complaints test the Lord. A complaint is an expression of grief, pain, or dissatisfaction, according to Webster’s. Proverbs teaches us that a contentious wife is one who is likely to cause contention, that is, arguments, or tension resulting from a contest, struggle, or rivalry, exhibiting an often perverse and wearisome tendency to quarrels and disputes; having an aggressive or fighting atittude. Contention shares a root with contentment: satisfaction with one’s possessions, status, or situation. In other words, contention and contentment are spiritual opposites — the contented wife is satisfied, while the contentious wife always has complaints.

Wasn’t Israel YHVH’s contentious wife? Complaints … they were not satisfied with their leaders, water, food, Land — even with their God, in the instance of the golden calf. They coveted, really, whatever it was that they did not have. Covetousness means “always desiring more; not satisfied; avaricious.”

The Lord said of them that their contentions were a rejection of Him. We can see that: Moses was a hand- picked leader for them, deliverance from slavery, manna, sweet water, the Promised Land — all gifts from the Father’s hand. And the root of complaints, contentions, and covetousness all boils down to unbelief.

Beware, brethren, lest there be in any of you an evil heart of unbelief in departing from the living God; 13 but exhort one another daily, while it is called “Today,” lest any of you be hardened through the deceitfulness of sin. 14 For we have become partakers of Christ if we hold the beginning of our confidence steadfast to the end, 15 while it is said:

“Today, if you will hear His voice,
Do not harden your hearts as in the rebellion.”

16 For who, having heard, rebelled? Indeed, was it not all who came out of Egypt, led by Moses? 17 Now with whom was He angry forty years? Was it not with those who sinned, whose corpses fell in the wilderness? 18 And to whom did He swear that they would not enter His rest, but to those who did not obey? 19 So we see that they could not enter in because of unbelief. Heb 3:12-19