You are here: Home / Perspective / reality check / the god of islam is not the God of the Bible 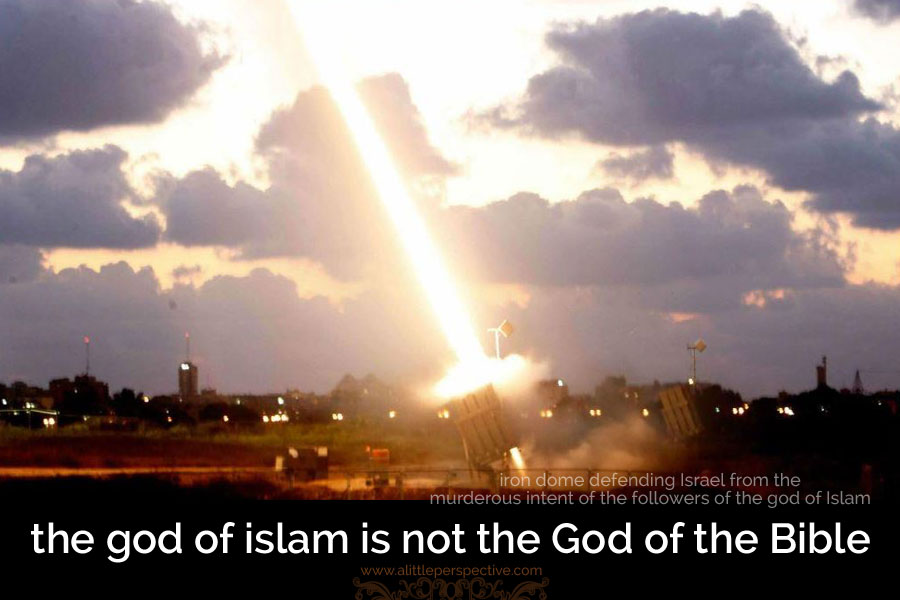 I was just thinking how ridiculous it is to say that the god of Islam and the God of the Bible, whom the Jews and Christians worship, is the same being. Why would the same God command some of his followers to slaughter the others? The God of the Bible commands all men everywhere to repent of murder, lying, adultery and the like. The followers of the god of Islam, claiming it is their god’s command, murder everyone, even other Muslims. They lie and deceive everyone about their true agenda, for they are engaging in peace talks and ceasefires with Israel when they have NO intention of peace, or to cease firing. They sell little girls they have captured as sex slaves. Not only is the sex slavery trade condemned by God in the Bible as an abhorrent evil, but so is kidnapping, and waging unjust warfare (the kind of warfare that occurs all over the world at the “bloody edges of Islam,” that Islam wages against non- Muslims). It is not just ISIS … Muslims in Africa did the same thing: capture Christian girls to sell as sex slaves, a few months ago. There was a huge #bringbackourgirls twitter campaign.

The God of the Jews and Christians is the same Being … His followers are united together in support of each other. You don’t see Jews beheading Christians, do you? The Christians are engaging in a #standwithisrael twitter campaign. There is a reason the foundation of Western Civilization is called the Judeo-Christian foundation … the one God is the God of both His witnesses (Zec 4, Rev 11).

If the god of Islam is not the God of the Bible, then who is he? He is the one who loves murder, lying, deception, slavery, who takes pleasure in death and destruction, in violating women and children, and trodding down the vulnerable, in oppressing the weak and fatherless. He is the one who loves the appearance of religion without a corresponding renewed heart and life. He is the one who cannot raise the dead or heal the sick, but instead inflicts death and spreads disease as a weapon. Since he is the god of the terrorists, he is himself a terrorist, the father of terror, panic, nightmares, and fear. Don’t let the crazy logic stand the next time someone tries to tell you the Muslims worship the same God as Christians and Jews — it is a complete lie!

What if someone says, Well, most of the Muslims don’t agree with ISIS or Hamas, ISIS doesn’t represent regular Islam. Ask them, “Then why are not the 22 Muslim nations of the Middle East engaged in warfare to wipe ISIS out, if they are aberrant? Why are they calmly sitting in their palaces letting the genocide take place? Why do they not stand against Hamas wipng Israel off the map?” Because they are in agreement with the ISIS and Hamas agenda. If they truly opposed it they would oppose in more than words only. Let actions speak louder than words.