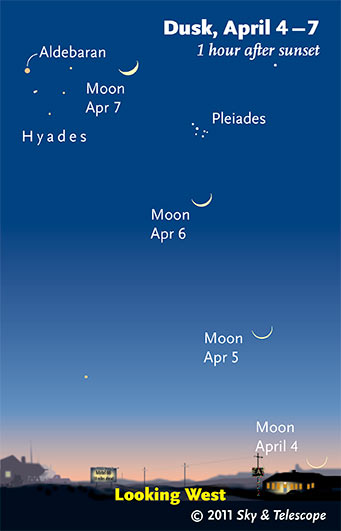 MoonConnection.com (the site that provides my sidebar real- time moon info and which I have found to be accurate)  shows the first sliver appearing on Monday evening April 4th, as does the graphic from Sky and Telescope magazine. It is so low on the horizon, however, that it might not be visible in some places until Tuesday evening. In cases like this, I go by when the new moon is sighted in Israel for determining the date of the 1st of the month. I will receive an email from Israel when they have seen it, and I will post it here.

Significance of the new moon

Celebrating on the new moon

o4 april 2011 update: I received this email from Israel: