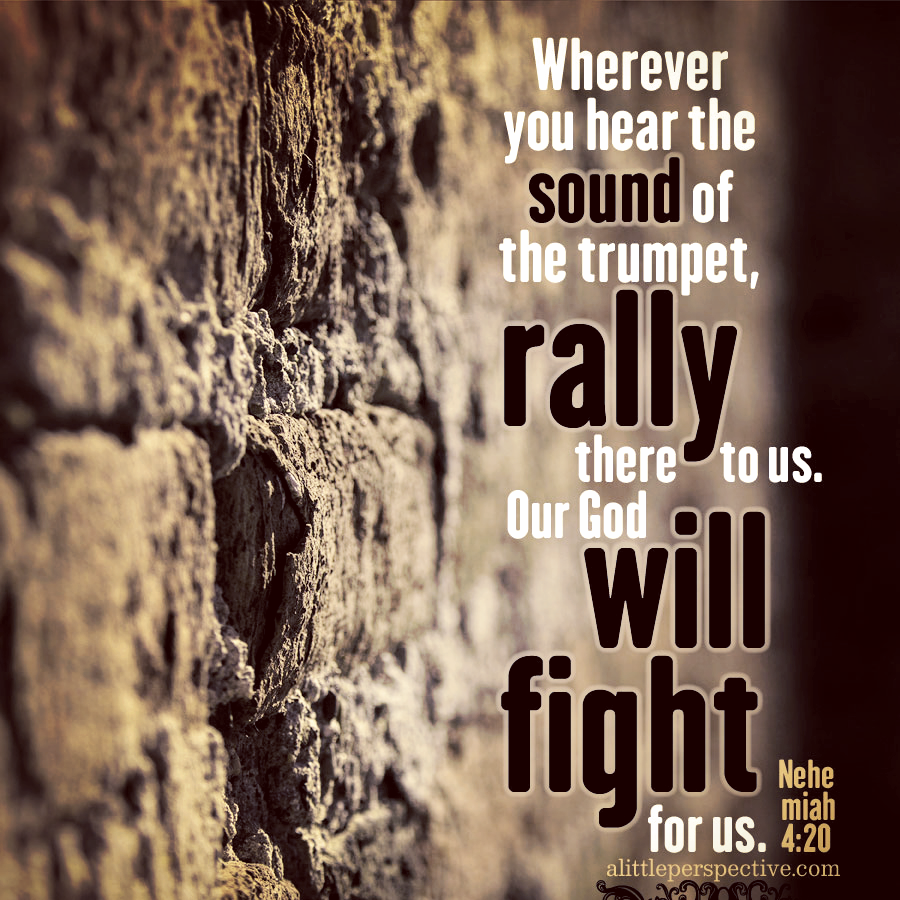 Read Nehemiah 4 and 5 at Bible Gateway.

Neh 4:1-8 {p} The enemies’ plan to kill the Jews + stop the work
Neh 4:9-17 {s} Nehemiah + all Jerusalem worked with weapons in hand because of the enemy
Neh 5:1-8 {s} The outcry of the people against their rulers who charged them interest
Neh 5:9-19 {p} Nehemiah reproves the rulers; they promise to restore their brethren

I find it interesting that the enemies of the Jews and their work in rebuilding the city of Jerusalem, were Sanballat, who was a Samaritan, i.e., a transplant from the nations living in the Israel’s hill country which traditionally belonged to Ephraim. Today this same territory is known as the West Bank, and today, transplants from the nations, who are not Jews, live there, and who likewise do not seek the welfare of the Jews or of Jerusalem.

Israel is unique among the nations, in that her history prophesies of things to come for the people of God. In our own day, once again the Jews have returned to their land from exile among the nations. They have been working diligently to rebuild their country and their city since their return, but it has been in the midst of opposition. Their enemies have been, incidentally, Palestinians, the dwellers of the West Bank and Gaza, Jordanians, and Arabs.

When the enemies of the Jews could not enlist the help of the king in stopping the work on the Temple, or the city (see Ezra), they resorted to threats and intimidation. The Jews took their threats seriously, but they did not stop the work.

So what does this mean for Israel today? Keep building, but every one with his sword girded on his thigh. And do not relinquish your city just because your enemies are demanding it of you.

This is the natural application; there is also a spiritual application: the history of Israel was written down as an example for the people of God in Messiah Yeshua (1 Cor 10:11). The people of God are engaged in the work of building up (the meaning of the Greek verb “to edify”), each one according to his gifts and callings, the Body of Messiah, the Bride of Christ, which is the New Jerusalem (Eph 4:11-13).

We are engaged in this work in the midst of opposition. There are enemies out there who wish to put a stop to it. They are spiritual enemies, principalities and powers, rulers of wickedness and their minions. They do not have legal grounds to do so, so their only avenue is to cause us to voluntarily stop our work through threats and intimidation: fear.

It is interesting that just as God called Nehemiah to do a work of building for Him, He has likewise called us. God expected Nehemiah to do his job and to complete his mission, but He did not remove the obstacles from his path. He could have — He could have blasted the enemies of His people so that they could work unhindered. He chose not to. He expected Nehemiah to figure it out, to find a solution without compromising the mission. To build with one hand and to wield the sword with the other.

It is the same with us. We need to keep working, with our sword girded onto our thigh. Our sword is the sword of the Spirit, the Word of God (Eph 6:10-18). We do battle against their threats, intimidation, fear, and lies, by casting down arguments and every imagination which exalts itself against God and the knowledge of God, which is truth (2 Cor 10:3-5). Our enemy does not have legal grounds against us. His armor, weapons, and power were stripped from him by Messiah Yeshua in the cross (Col 2:15). Now all that is left for us, having done all, is to stand, and not leave our position on the wall.