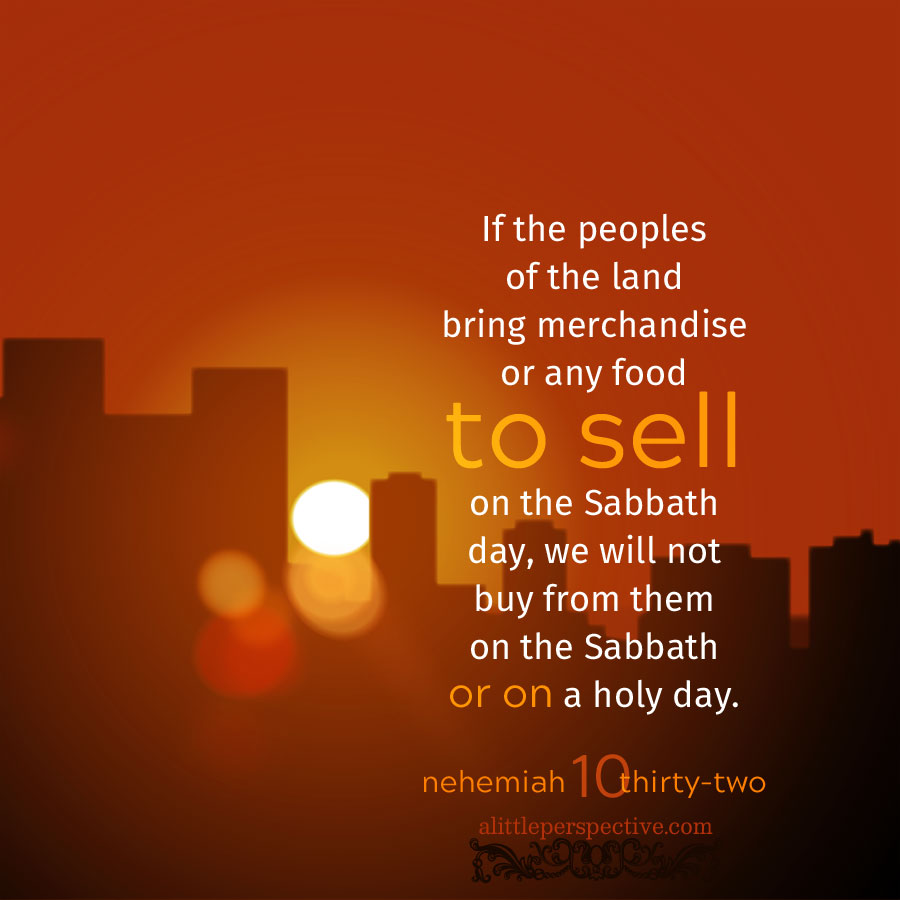 Read Nehemiah 10 and 11 at Bible Gateway.

Now the rest of the people—the priests, the Levites, the gatekeepers, the singers, the Nethinim, and all those who had separated themselves from the peoples of the lands to the Law of God, their wives, their sons, and their daughters, everyone who had knowledge and understanding— these joined with their brethren, their nobles, and entered into a curse and an oath to walk in God’s Law, which was given by Moses the servant of God, and to observe and do all the commandments of the LORD our Lord, and His ordinances and His statutes:” Neh 10:28-29

At this time in history, monotheism was not the norm. Paganism, nature worship in the form of many idols, all under the dominion of the sun god, was the norm. This is the religion that was established at Babel (Hebrew name) or Babylon (Greek name) in the fifth generation after the Flood, when the forefathers of the peoples of the lands or nations rebelled against the commandment of God to fill the earth (Gen 11:1-9). For the seventy grandsons and great- grandsons of Noah listed in Gen 10, were the fathers of the nations of the world.

The worship of the true God, the Creator of heaven and earth, was forgotten for a time, except in a small line of the family of Shem — and by the time Abram was born into that family, even that line was succumbing to the lie, for even Abram’s father worshiped idols (Jos 24:2). But God called one man out of the nations (Gen 12:1-3), to establish His unique nation of Israel, one nation out of seventy which served and worshiped the true God, Creator of heaven and earth.

Judah had been carried away captive to Babylon, when they forsook God and became idolaters as all the other nations. They were no longer set apart from the common, or holy to the LORD. But now a holy seed, or set apart seed, had returned to the land from Babylon. It is interesting that this holy seed is one tenth or the tithe of the people of Judah (Isa 6:12-13).

The Scriptures, in describing that this holy seed had devoted themselves to the worship of the one true God, declared of them that they had separated themselves from the peoples of the lands. They were not following the common practice of worship established at Babel as the whole world everywhere followed. To become separate or set apart is the meaning of the word “holy.”

But the Scripture phrases that separateness, that devotion to the worship of the one true God this way:

“… they separated themselves from the peoples of the lands to the Law of God.”

Furthermore, everyone who possessed knowledge and understanding pledged themselves to obedience to the Law of God which He had given to His servant Moses. Obeying the Law, or walking in His ways (a common Hebraic euphemism meaning to obey the Law) was the tangible outward distinction that showed that the people were set apart or holy to the LORD their God.

They did not obey the Law in order to get into the exclusive holy seed club. They were the holy seed, that was their identity, and repentance and obedience distinguished them as the holy seed. It did not confer set apartness on them, but it confirmed their established identity as the set apart. The great majority, 90% of the Jews, remained in Babylon, content to dwell among the peoples of the lands.

Today, what does the LORD call us? We are “saints;” the Hebrew, as in Psa 106:16, is qadosh, or holy one; the Greek, as in Phi 4:21, is hagios, most holy. We are “elect” out of the peoples of the lands. Scripture teaches us that the next step for the set apart ones, is obedience to the Law of God.