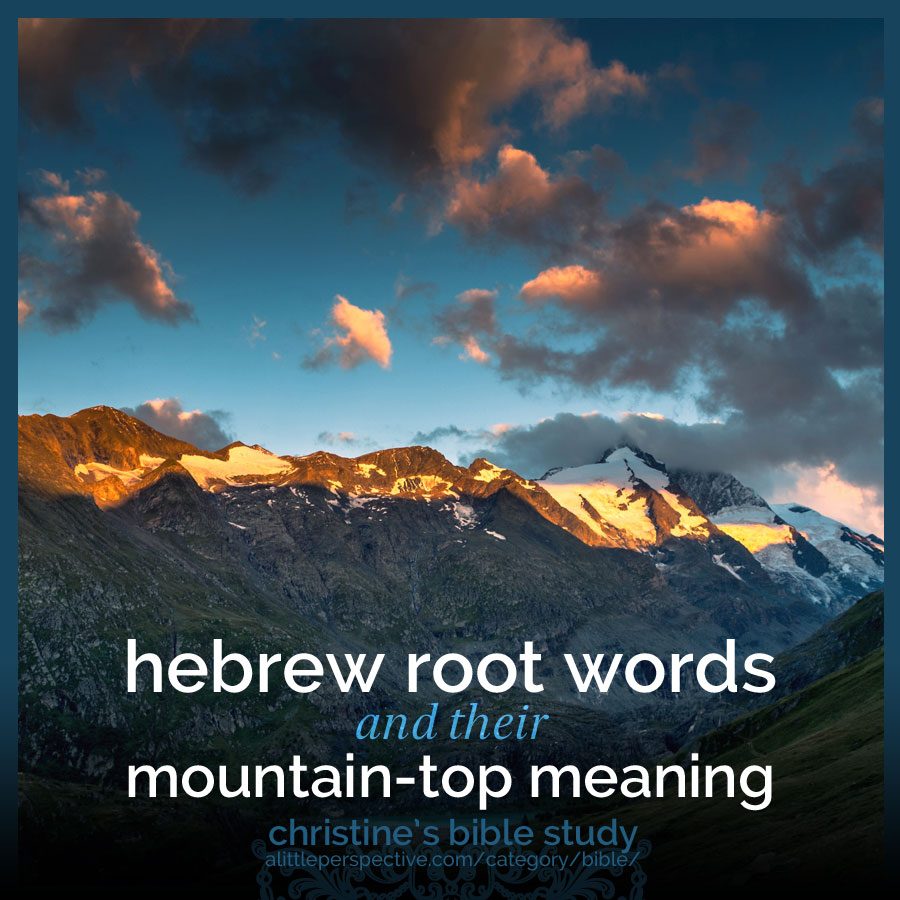 I have been fascinated by Hebrew ever since I took the Hebrew class at the MIA Conference my daughter and I attended about a month ago. Hebrew, at least, ancient Hebrew, is the original language, the language that God gave to Adam, the language from which all other languages have been derived. The language in which God said, “Let there be light!” and there was light.

One problem with English, is that abstract concepts, such as faith, or holy, or love, are defined by other abstract concepts. To have faith is to believe. But what does to believe mean, really? It is another ethereal something that is hard to grasp and therefore anyone can make it mean almost anything.

Hebrew, however, is a concrete language. Its letters began as pictographs, symbols for concrete objects which anyone can look out of their window and see and experience and understand, even five- year- olds. Its letters stand for things like houses, families, water, sons, baskets, heads, oxen, seeds.

For example, the Hebrew word for “unity” comes from the primitive three- letter root achad, Strong’s H258. The letters are an aleph, chet, dalet (almost all Hebrew words come from three- letter roots that contain their essential meaning. Three letters to provide a single essential meaning. Even the nature of the Hebrew language reveals theological truths. It is just so fascinating).

Now even the letters in Hebrew have their own meanings, because remember they began as pictographs: each letter depicted something concrete. The aleph, in ancient Hebrew, was the pictograph of an ox. The pictorial meaning of aleph is strong, leader, or first (the ox is in front of the plow).

The concrete meaning, therefore, of unity, the meaning that even five- year- olds could understand, is to strongly (aleph) fence (chet) the door (dalet). This is the concrete, original “mountain- top” or pure meaning of the word unity in Hebrew. How does it mean unity?

Let’s say you are in a theater and a fire breaks out. What is the first thing you do? Head for the door. EXIT! But what if you are in a theater, and a fire breaks out, and there is no door; there is no way out? Then your only option is to put out the fire. Many many spouses, when a fire breaks out in their marriage, head for the exit! But in Hebrew, the man and his wife are united, thus the door, the exit, has been strongly fenced. You cannot exit through the door – there is a strong fence preventing you. So what do you do? You put out the fire! And that is the original, pure meaning of the word “unity” from the Hebrew roots. It is really beautiful! I learned this example [link disabled] from Living Word Pictures, the website of Dr. Frank Seekins, which our Hebrew teacher recommended to us.

Older Strong’s concordances (I believe before 1979) include the three- letter roots of all the Hebrew words in the Bible, so a person can, as they study, come to understand for themselves the original, mountain-top meanings of the Hebrew, and begin to learn what God means when He says, for example, “Behold, how good and how pleasant it is for brethren to dwell together in unity!” (Ps 133:1).

I am using the Blue Letter Bible for my study for now, which includes a pre-1979 edition of Strong’s.

My Hebrew teacher was Brad Scott of Wildbranch Ministry, and he has a lot more on this subject, including his Research Resources list, which can help someone learn the things I am talking about. Other books of his that I want to get in this same vein are Words Mean Things, about the mountain top meanings of the word, and In My Flesh I See God, about the amazing Hebrew language and how it is embedded in all of creation, bringing new insight to the phrase “He is upholding all things by the Word of His power,” Heb 1:3. 🙂

INDEX OF HEBREW ROOTS | THE TEACHING TOOLS OF SCRIPTURE