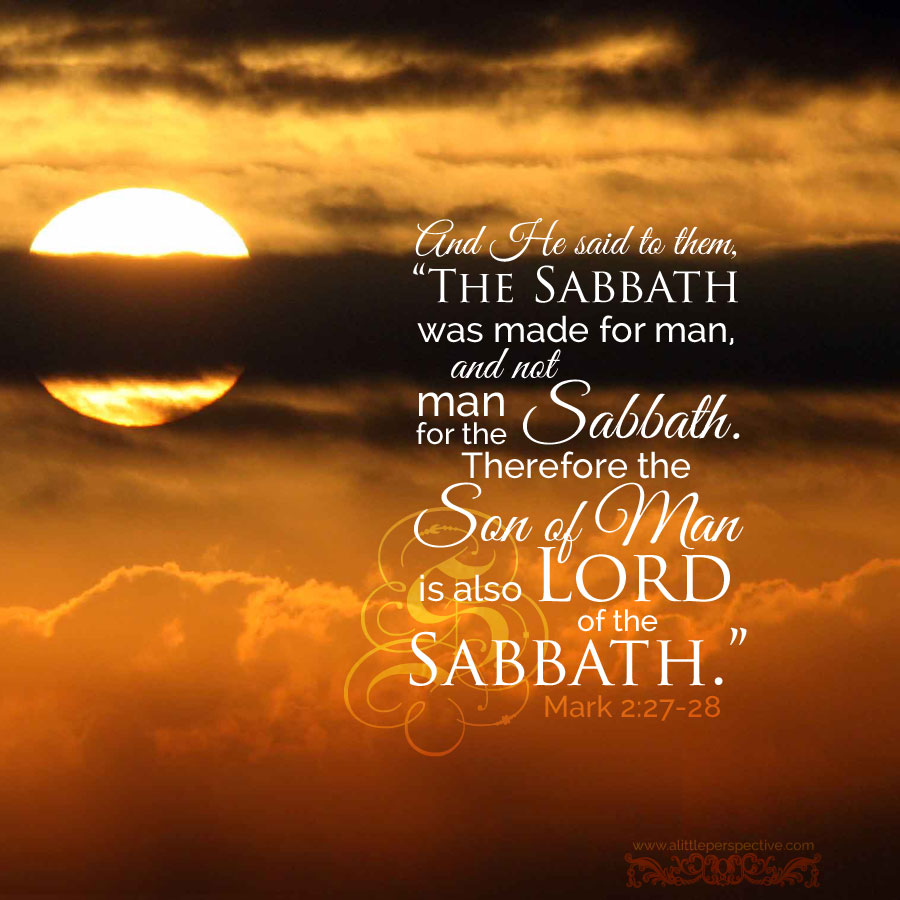 “Now it happened that He went through the grainfields on the Sabbath; and as they went His disciples began to pluck the heads of grain. And the Pharisees said to Him, “Look, why do they do what is not lawful on the Sabbath?” But He said to them, “Have you never read what David did when he was in need and hungry, he and those with him: how he went into the house of God in the days of Abiathar the high priest, and ate the showbread, which is not lawful to eat except for the priests, and also gave some to those who were with him?” And He said to them, “The Sabbath was made for man, and not man for the Sabbath. Therefore the Son of Man is also Lord of the Sabbath.” Mar 2:23-28

Although an excellent case can be made that the Pharisees’ first premise was wrong, that in fact the disciples were not violating the Sabbath by plucking the heads of grain to eat, Jesus did not refute their complaint with that argument. Instead, He used an example from Scripture, when David seemed to violate Torah by eating the showbread in the Temple (Lev 24:5-9, 1 Sam 21:1-6), to show that something greater was being shown since no judgment fell upon David for this act.

Now it was not that David, as king, was immune from violations of Torah. God judged David more than once when he truly broke Torah, as he did in the matter with Uriah and Bathsheba (2 Sam 11-12), and also the census taking (1 Chr 21). But He refrained from judging him in the instance Jesus refers to. Why? It must be because Torah was not truly broken.

But David is a type of Messiah. He was a shepherd who was called to shepherd God’s people Israel. He delivered them from giants and the Philistines, and all their enemies. He established righteous rule from one end of the kingdom to the other. He served as king, and as prophet, for his psalms are Thus saith the Lord, and many are prophetic of the Messiah. But then when David ate the showbread, reserved only for the priests, he was not rejected. I believe Jesus brought out this point to show to the Pharisees that it was because David was foreshadowing Messiah (I.e. it is lawful for Messiah to act as priest), that he was not rejected.

Combined with the dispute over whether Sabbath was really being broken or not, Jesus paints a powerful truth. And that is, that Messiah, who is the Living Torah (the Word of God made flesh, Joh 1:14), knows how to rightly apply Torah in every situation and not be in violation of it, because His heart is right before God. Thus the Son of Man, His own Messianic title for Himself, is the Lord of the Sabbath.

Jesus lived this understanding that to be Lord of something means to uphold it. For He fulfilled Torah perfectly, not transgressing it in any point, while He lived on earth. He did not break Torah cavalierly because He was Lord of it, showing that the sense of being Lord of it could not be to disregard it.

Jesus also taught us something important about Sabbath observance here: Sabbath is was made to serve man. Man was not made to be enslaved by Sabbath. So let’s be clear: this understanding is not license to disregard Sabbath. Sabbath is God’s holiest of moedim (appointed times or feast days), and He commanded us not to pursue our livings on this day, so that we could rest and have a day to worship and pursue Him. Obviously, plucking a few heads of grain because you are hungry, on Sabbath, is not the same as harvesting your grain for your livelihood on Sabbath. So let us honor the Sabbath day, because we honor the Lord whose day it is, without being wrongly enslaved to it.

« that which has been nailed to the cross
sabbath index »