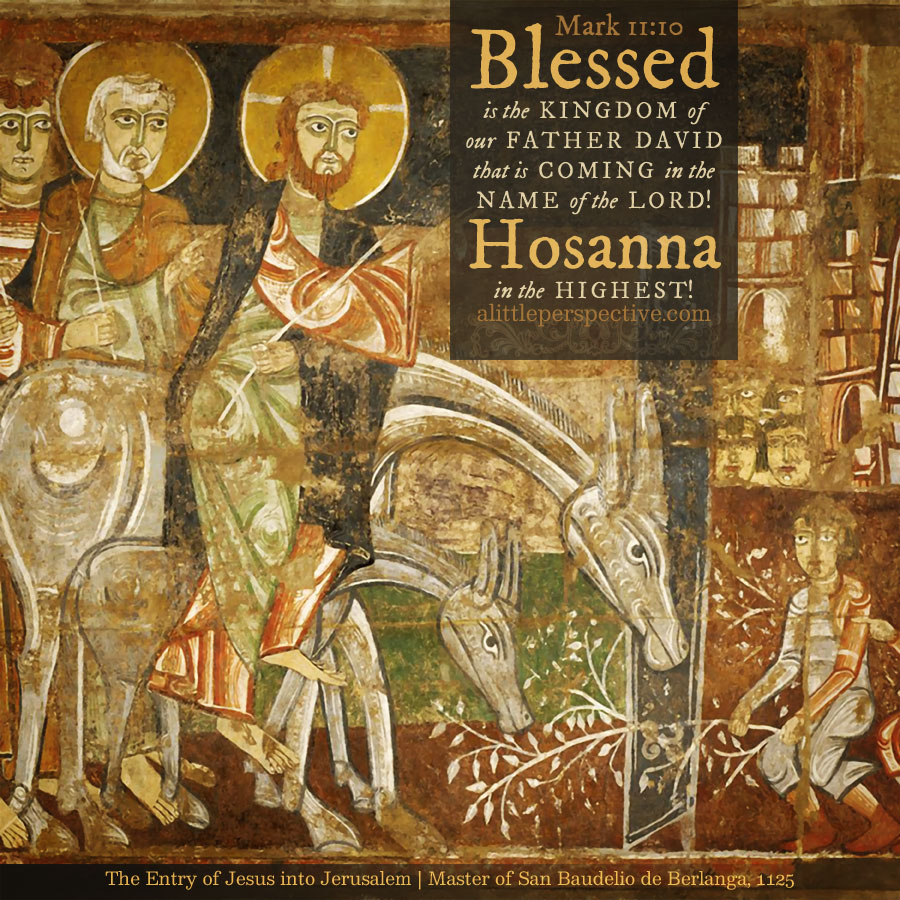 I saw a chiastic structure in this chapter, but in order to understand it, we have to understand what the fact of the riding into Jerusalem on the back of a donkey’s colt, and the cleansing of the Temple, meant to the Jews. When Jesus rode into Jerusalem on the colt, vs. 1 tells us that when they came to Jerusalem, when they were still outside the city, they were at the Mount of Olives. This is significant information, because if you look on a map of Israel, you will notice that the Mount of Olives is due east of the Temple (what follows is from Ezekiel’s vision of the Temple):

“Afterward he brought me to the gate, the gate that faces toward the east. And behold, the glory of the God of Israel came from the way of the east. His voice was like the sound of many waters; and the earth shone with His glory.” Eze 43:1-2

“Then He brought me back to the outer gate of the sanctuary which faces toward the east, but it was shut. And the LORD said to me, “This gate shall be shut; it shall not be opened, and no man shall enter by it, because the LORD God of Israel has entered by it; therefore it shall be shut.” Eze 44:1-2

Do you realize the gate which faces toward the east, is the gate which Jesus entered Jerusalem and the Temple by, when He came riding in on the colt of a donkey from the Mount of Olives? For many centuries now, this gate has been bricked up, as Suleiman the Magnificent so ordered when the Ottoman Turks took the Holy Land from the Persians in 1541. My pastor in Colorado, who goes to Israel every year with a tour group, told us that they bricked up this gate, because they did not want the people of the Book (us and the Jews) thinking that someone who entered that gate was the Messiah, and thereby rising up in rebellion against their Ottoman overlords. Thanks to them, the gate has been shut up, and no man has entered by it, because YHVH the God of Israel entered by it, riding on the colt of a donkey!

“And in that day His feet will stand on the Mount of Olives, which faces Jerusalem on the east. And the Mount of Olives shall be split in two, from east to west, making a very large valley; half of the mountain shall move toward the north and half of it toward the south. Then you shall flee through My mountain valley, for the mountain valley shall reach to Azal. Yes, you shall flee as you fled from the earthquake in the days of Uzziah king of Judah. Thus the LORD my God will come, and all the saints with You.” Zec 14:4-5

When He entered through the East Gate from the Mount of Olives the first time, the people cried out before Him:

Because they knew what Ezekiel prophesied about the coming of the Messiah, and because they knew what Zechariah prophesied about the coming of the Messiah, they were proclaiming the one coming in through the East Gate the son of David, the promised Messiah. They were proclaiming that David’s kingdom was coming with Him, and that He would save them from the Romans (Hosanna means, save us!)

Here is the chiastic structure:

So, that Jesus immediately went to cleanse the Temple, after entering through the East Gate and being proclaimed Messiah by the people, is an action taken in order to acknowledge the people’s praises and establish that it is His right, as the Son of David, to do so.

The Pharisees and scribes, in asking by what authority Jesus entered the East Gate, and cleansed the Temple, were in essence asking Him whether He was the Messiah or not. They knew the Scriptures and knew that building the Temple or restoring the Temple is the sign of the house of David! Why do you think a cruel and grasping king like Herod the Great built and beautified the second Temple? He did not care for God! He was trying to establish his claim to the kingship of Israel!

Jesus, in order to answer them, asked them a question in turn which revealed their heart. They did not acknowledge that the ministry of repentance of John the Baptist was from God! They thought that he just got the idea in his head one day to be a prophet and live in the desert, and that it was from his own flesh. Their answer revealed that if He told them the truth about His authority, they would not believe Him. Even a Roman centurion, a Gentile, recognized His authority before they did (Mat 8:5-13).

So now, we see that when Messiah comes, He will cleanse the Temple. That is one of His ministries – to restore to the people the pure worship of God, and to drive out the dross and impurities. Beloved, that is still His ministry! When He comes into our hearts, when we have acknowledged Him not only as Savior but also as King, then He begins to cleanse His Temple – which is us (1 Cor 6:19)! He restores to us the pure and unadulterated worship of God! Sometimes, what He wants to do, will bring us into the cross hairs of the professional experts on God. Thus it has ever been!

It is interesting that cleansing the Temple, in the chiastic structure, is wrapped with the fig tree incident. The fig tree and also the olive tree represents Israel, into which us Gentiles have been grafted, so that we are not to consider ourselves Gentiles any longer, but partakers of the covenants of promise, which were all made with Israel (Eph 2:11-13, Rom 11:17). The lesson of the fig tree is a warning, I believe, to us who are called Israel, not be found without fruit when Messiah comes! For if He finds no fruit in us, then our place is forfeit.