You are here: Home / Perspective / government and economics / lord acton on economies and governments 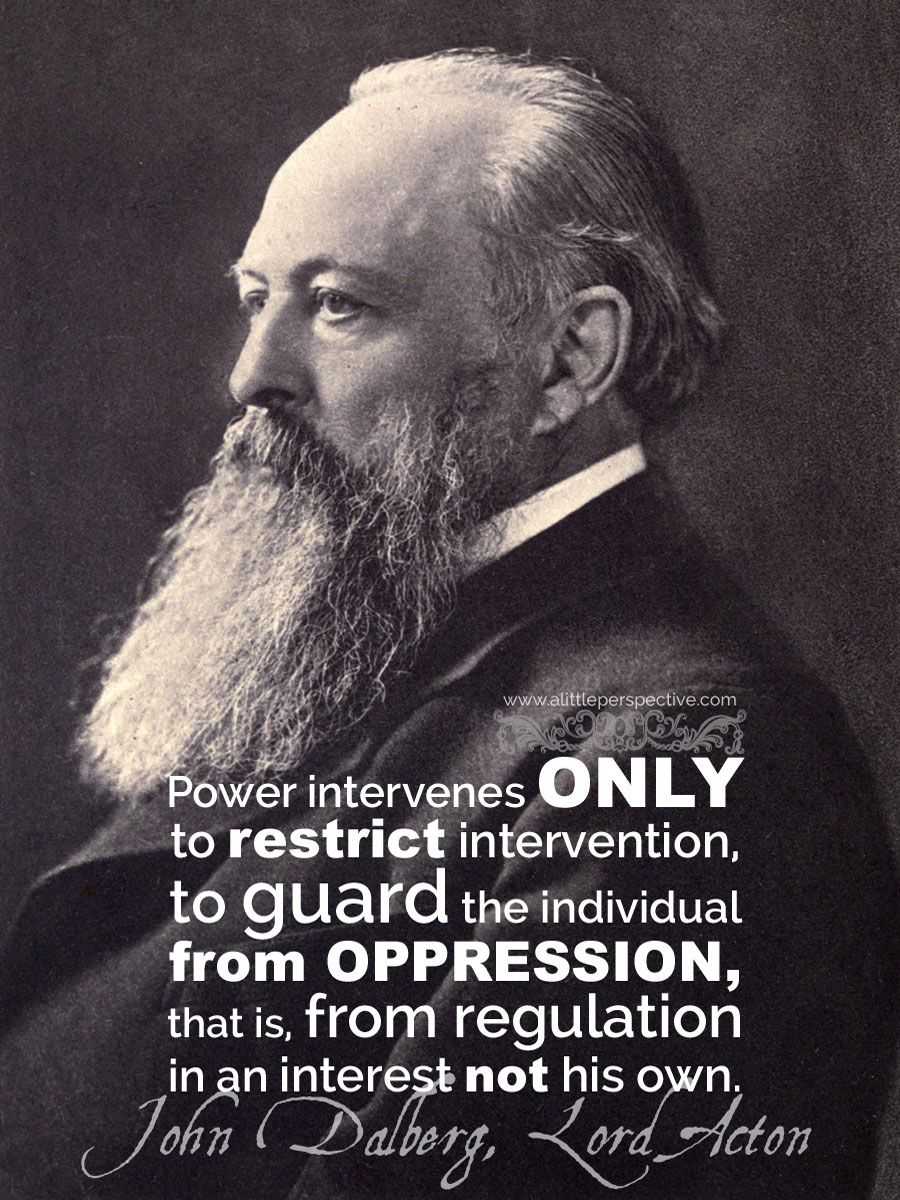 Lord Acton, writing on the French Revolution, expounds on the theory of the French economists who preceded it. They believed that the absolute power of a monarchy, properly applied, was the best guarantee of the liberty of the state. They held the same horror of democracy that America’s Founding Fathers held. But to the French economists, the check and balance system of government employed in America and in England, was counter-productive, and they could not approve it. That it was indeed counter-productive, was its greatest appeal to the American Founders, who believed the worst enemy of liberty was government itself, left to grow unchecked. Shackling the legislature with two houses, elections with two systems of counting votes, and the government with three branches, competing for supremacy at the expense of the others, was the best way they knew to slow its inevitable spread and growth.

“Turgot was too discreet for such an excess, and he looked to history for the demonstration of his law. He had come upon it in his theological studies. He renounced them soon after, saying that he could not wear a mask. When Guizot called Lamennais a malefactor, because he threw off his cassock and became a freethinker, Scherer, whose course had been some way parallel, observed: “He little knows how much it costs.” The abrupt transition seems to have been accomplished by Turgot without a struggle. The Encyclopaedia, which was the largest undertaking since the invention of printing, came out at that time, and Turgot wrote for it. But he broke off, refusing to be connected with a party professedly hostile to revealed religion; and he rejected the declamatory paradoxes of Diderot and Raynal.

“He found his home among the Physiocrats, of all the groups the one that possessed the most compact body of consistent views, and who already knew most of the accepted doctrines of political economy, although they ended by making way for Adam Smith. They are of supreme importance to us, because they founded political science on the economic science which was coming into existence. Harrington, a century before, had seen that the art of government can be reduced to system; but the French economists precede all men in this, that holding a vast collection of combined and verified truths on matters contiguous to politics and belonging to their domain, they extended it to the whole, and governed the constitution by the same fixed principles that governed the purse.

“They said: A man’s most sacred property is his labour. It is anterior even to the right of property, for it is the possession of those who own nothing else. Therefore he must be free to make the best use of it he can. The interference of one man with another, of society with its members, of the state with the subject, must be brought down to the lowest dimension. Power intervenes only to restrict intervention, to guard the individual from oppression, that is from regulation in an interest not his own. Free labour and its derivative free trade are the first conditions of legitimate government. Let things fall into their natural order, let society govern itself, and the sovereign function of the State will be to protect nature in the execution of her own law. Government must not be arbitrary, but it must be powerful enough to repress arbitrary action in others. If the supreme power is needlessly limited, the secondary powers will run riot and oppress. Its supremacy will bear no check. The problem is to enlighten the ruler, not to restrain him; and one man is more easily enlightened than many. Government by opposition, by balance and control, is contrary to principle; whereas absolutism might be requisite to the attainment of their higher purpose.

“Nothing less than concentrated power could overcome the obstacles to such beneficent reforms as they meditated. Men who sought only the general good must wound every distinct and separate interest of class, and would be mad to break up the only force that they could count upon, and thus to throw away the means of preventing the evils that must follow if things were left to the working of opinion and the feeling of masses. They had no love for absolute power in itself, but they computed that, if they had the use of it for five years, France would be free. They distinguished an arbitrary monarch and the irresistible but impersonal state.

“It was the era of repentant monarchy. Kings had become the first of public servants, executing, for the good of the people, what the people were unable to do for themselves; and there was a reforming movement on foot which led to many instances of prosperous and intelligent administration. To men who knew what unutterable suffering and wrong was inflicted by bad laws, and who lived in terror of the uneducated and inorganic masses, the idea of reform from above seemed preferable to parliamentary government managed by Newcastle and North, in the interest of the British landlord. The economists are outwardly and avowedly less liberal than Montesquieu, because they are incomparably more impressed by the evils of the time, and the need of immense and fundamental changes. They prepared to undo the work of absolutism by the hand of absolutism. They were not its opponents, but its advisers, and hoped to convert it by their advice.

“The indispensable liberties are those which constitute the wealth of nations; the rest will follow. The disease had lasted too long for the sufferer to heal himself: the relief must come from the author of his sufferings. The power that had done the wrong was still efficient to undo the wrong. Transformation, infinitely more difficult in itself than preservation, was not more formidable to the economists because it consisted mainly in revoking the godless work of a darker age. They deemed it their mission not to devise new laws, for that is a task which God has not committed to man, but only to declare the inherent laws of the existence of society and enable them to prevail.

“The defects of the social and political organisation were as distinctly pointed out by the economists as by the electors of the National Assembly, twenty years later, and in nearly all things they proposed the remedy. But they were persuaded that the only thing to regenerate France was a convulsion which the national character would make a dreadful one. They desired a large scheme of popular education, because commands take no root in soil that is not prepared. Political truths can be made so evident that the opinion of an instructed public will be invincible, and will banish the abuse of power. To resist oppression is to make a league with heaven, and all things are oppressive that resist the natural order of freedom. For society secures rights; it neither bestows nor restricts them. They are the direct consequence of duties. As truth can only convince by the exposure of errors and the defeat of objections, liberty is the essential guard of truth. Society is founded, not on the will of man, but on the nature of man and the will of God; and conformity to the divinely appointed order is followed by inevitable reward. Relief of those who suffer is the duty of all men, and the affair of all.

“Such was the spirit of that remarkable group of men, especially of Mercier de la Rivière, of whom Diderot said that he alone possessed the true and everlasting secret of the security and the happiness of empires.”

From pages 10-13 of Lectures on the French Revolution by John Emerich Edward Dalberg, Lord Acton, 1901 edition. Available at the Online Library of Liberty.