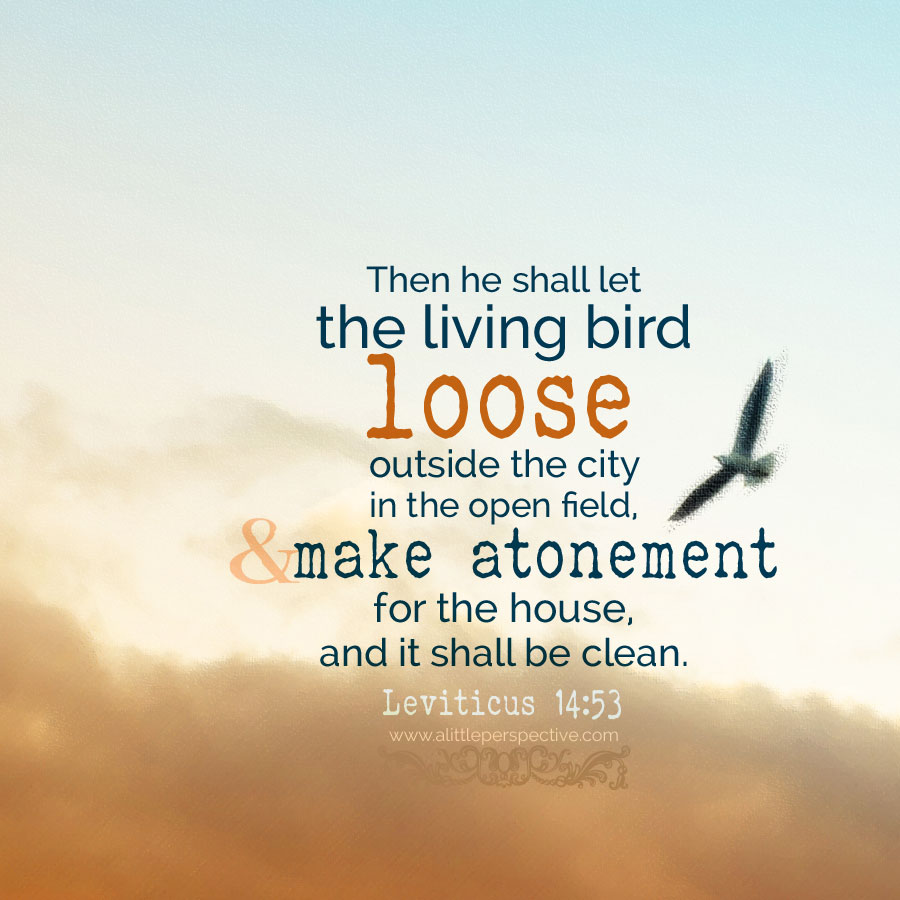 This chapter is at the heart of a larger chiastic structure:

The B pairs of the above chiastic structure contains a ceremony unlike any other in Torah (Lev 14:1-7 and 14:49-53; correct me if I am wrong, someone). Two living birds are brought, with wood, scarlet, and hyssop. It does not even say, scarlet stuff, or scarlet thread, as earlier in Torah. Just scarlet. One of the birds is killed over running water. Now I know it says “running water” in English. In Hebrew, it says, “living water.” Then the living bird, with wood, scarlet and hyssop, is dipped in the blood over the living water. The man is cleansed of his leprosy when that blood is sprinkled on him, and the living bird is set free.

We have seen the wood, scarlet, and hyssop before in Scripture:

Then Moses called for all the elders of Israel and said to them, “Pick out and take lambs for yourselves according to your families, and kill the Passover lamb. And you shall take a bunch of hyssop, dip it in the blood that is in the basin, and strike the lintel and the two doorposts with the blood that is in the basin. And none of you shall go out of the door of his house until morning. For the Lord will pass through to strike the Egyptians; and when He sees the blood on the lintel and on the two doorposts, the Lord will pass over the door and not allow the destroyer to come into your houses to strike you. Exo 12:21-23

This is the most famous prophetic picture of Messiah Yeshua in all of Torah. By connection of common theme, one of the teaching tools of Torah, we are meant to see that the ceremony of the living bird, with its repeat of the hyssop, scarlet (the blood), and wood (the lintel and the doorposts of the house), is likewise a prophetic picture of Messiah Yeshua. He gives the living water. The blood of the Passover Lamb is applied with hyssop. He is the Sin Sacrifice who is offered on the wood of the cross. It is His blood which ran scarlet, which imparts resurrection life (as the living bird is set free) and which cleanses us from walking death!