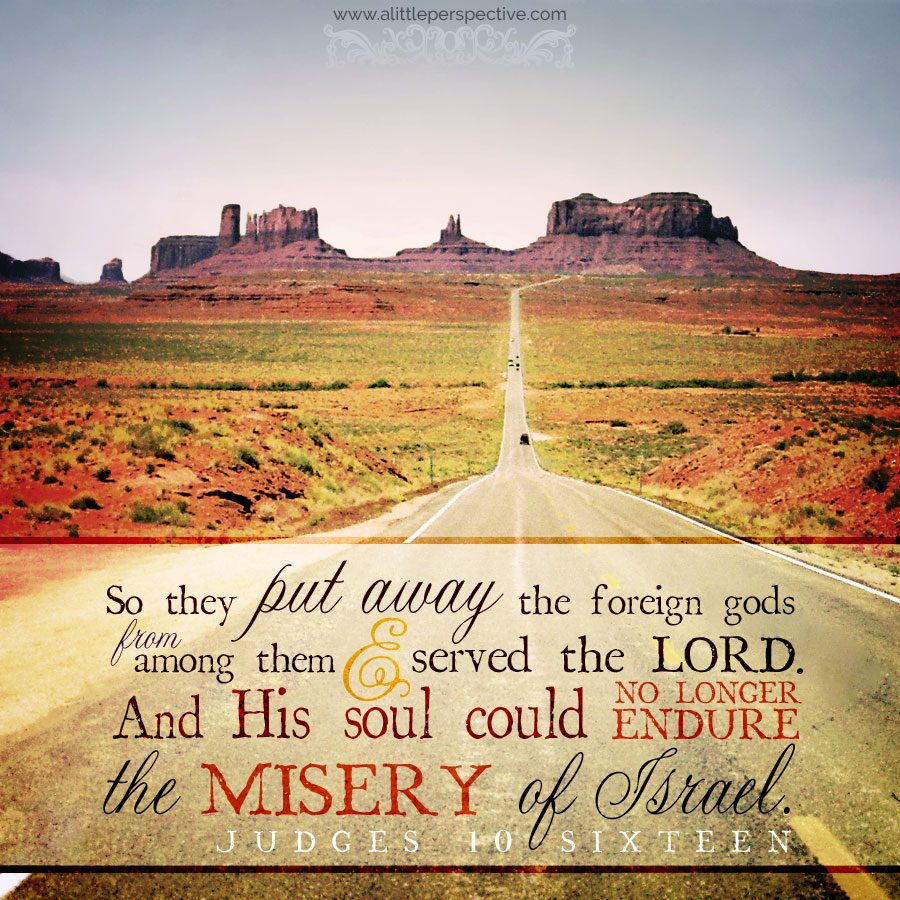 Read Judges 9 and 10 at Bible Gateway.

Jud 9:1-5 {s} Abimelech kills his brothers, the seventy sons of Gideon
Jud 9:6-21 {p} Shechem makes Abimelech king /Jotham’s parable/ prophecy of the king of the trees
Jud 9:22-25 {p} Ill will between the men of Shechem and Abimelech
Jud 9:26-41 {s} Gaal the son of Ebed instigates Shechem in civil war against Abimelech
Jud 9:42-45 {p} Abimelech took Shechem, killed all who were in it, and demolished the city
Jud 9:46-49 {p} The remnant fled to the tower / Shechem burned it and killed all who were left inside
Jud 9:50-57 {p} Abimelech went against Thebez and took it, but was killed when he sought to destroy the tower
Jud 10:1-2 {p} Tola of Issachar judged Israel 23 years
Jud 10:3-5 {p} Jair of Gilead judged Israel 22 years
Jud 10:6-10 {p} Israel forsook the LORD and are oppressed by the Philistines + Ammonites
Jud 10:11-16 {p} The Lord left Israel to the gods they have chosen to deliver them+ Israel put away other gods
Jud 10:17-18 {p} Ammon encamps against Israel in Gilead

This is really a lesson in absolute power corrupting absolutely. For the lust of sole power, Abimelech killed all his brothers but one who escaped, and every inhabitant of his home town who had made him king. How crazy is that! Who will he rule over when all his subjects are dead? Therefore he went to the neighboring city of Thebez to subdue it, and there met his just end.

But what really spoke to me today was the Lord’s response to Israel’s cry for deliverance in Jud 10:14. “Go cry to the gods you have chosen!”

God is the perfect parent. Yes, when Israel rebelled, it was always the new generation who served other gods. But when they got in trouble, they knew well enough who to call upon. Contrary to what is commonly said about Yehovah, the God of the Old Testament, it was not because He is angry, wrathful, vengeful, and judgmental that Israel felt comfortable rejecting Him again and again. It is because He is loving, merciful, and compassionate, forgiving iniquity and covering sins!

And the children of Israel said to the Lord, “We have sinned! Do to us whatever seems best to You; only deliver us this day, we pray.” So they put away the foreign gods from among them and served the Lord. And His soul could no longer endure the misery of Israel. Jud 10:15-16

When God left them in the hands of their worthless idols that they had chosen, the remarkable thing that happened to Israel, was true repentance, whether He would deliver them or not!

Parents, we need to take a lesson from the wisdom of God. You can extend grace and mercy to your children’s disobedience and rebellion so many times, but there comes a point, when they know better and still do not change their course, that all you are doing is helping them take advantage of your goodness. Someone once said (was it Einstein?) that true insanity is doing the same thing over and over again, expecting a different result. God is here teaching, that sometimes what is needed, is TOUGH LOVE, letting the children have the consequences of the choices they have made. If children never experience consequences, they never grow up. And this is just what Israel began to do — the right thing, whether it benefited them or not.