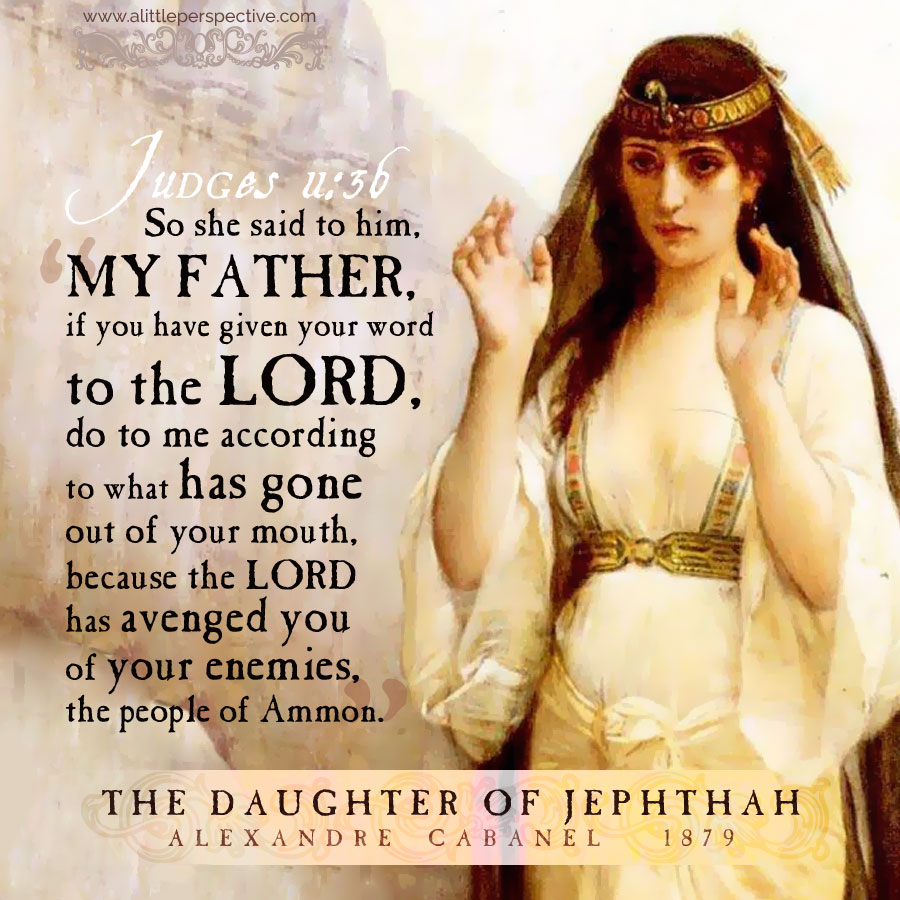 Today’s chapters continue the history begun yesterday, when Israel forgot the Lord after Jair had judged them 22 years, and were oppressed by Ammon. Ammon encamped against the tribes on the other side of the Jordan, in Gilead, and crossed the Jordan to oppress Judah, Benjamin, and Ephraim also, and God told them to let the gods they had chosen deliver them. The people repented and put away their false idols, whether God would deliver them or not!

So then yesterday the history ended with the elders of Gilead looking for a deliverer for them against Ammon. Today in Judges, the son of a harlot who had been driven from his father’s house, and who lived the life of an outcast and an outlaw, making his living by raiding (since he had no land for farming), was chosen by God to deliver Israel from the hand of the Ammonites.

Truly what matters with God, is the state of a man’s heart, not his status in the world’s eyes, his accomplishments, his past, or even his future which his privilege and position have laid out for him. The pattern we have seen, with Gideon and now with Jephthah, is this:

There is controversy among Hebrew scholars whether Jephthah really did sacrifice his daughter to the LORD as he said he would. The LORD never asked him for it. In fact He forbids sacrificing children to idols as the Canaanites did. But when a man makes a vow to the LORD, he is to keep his vow, so that the name of the LORD is not profaned.

This is one reason divorce is hated by God. A man or woman who divorces their spouse breaks the vow they made to the LORD on their wedding day, when they vowed that only death would part them. (Adultery negates the vow.)

But in my reading of Scripture, I think it is plain that he did sacrifice her as he had vowed. This is why Jesus said:

“Again you have heard that it was said to those of old, ‘You shall not swear falsely, but shall perform your oaths to the Lord.’ But I say to you, do not swear at all: neither by heaven, for it is God’s throne; nor by the earth, for it is His footstool; nor by Jerusalem, for it is the city of the great King. Nor shall you swear by your head, because you cannot make one hair white or black. But let your ‘Yes’ be ‘Yes,’ and your ‘No,’ ‘No.’ For whatever is more than these is from the evil one.” Mat 5:33-37

Gilead was on the east side of the Jordan, and had been given as a possession to the half tribe of Manasseh, with Reuben and Gad. Ephraim’s land was just opposite them on the west side of the Jordan. I am not sure why Ephraim got so offended, but the result in Jud 12 was a little civil war between the Ephraimites on the west side of the Jordan, and the Gileadites on the east side. Ephraim was offended at Gideon also, when he delivered Israel from the Midianites without them. Ephraim, is taking offense your besetting sin? Look to the Lord and be grateful for His gifts instead!