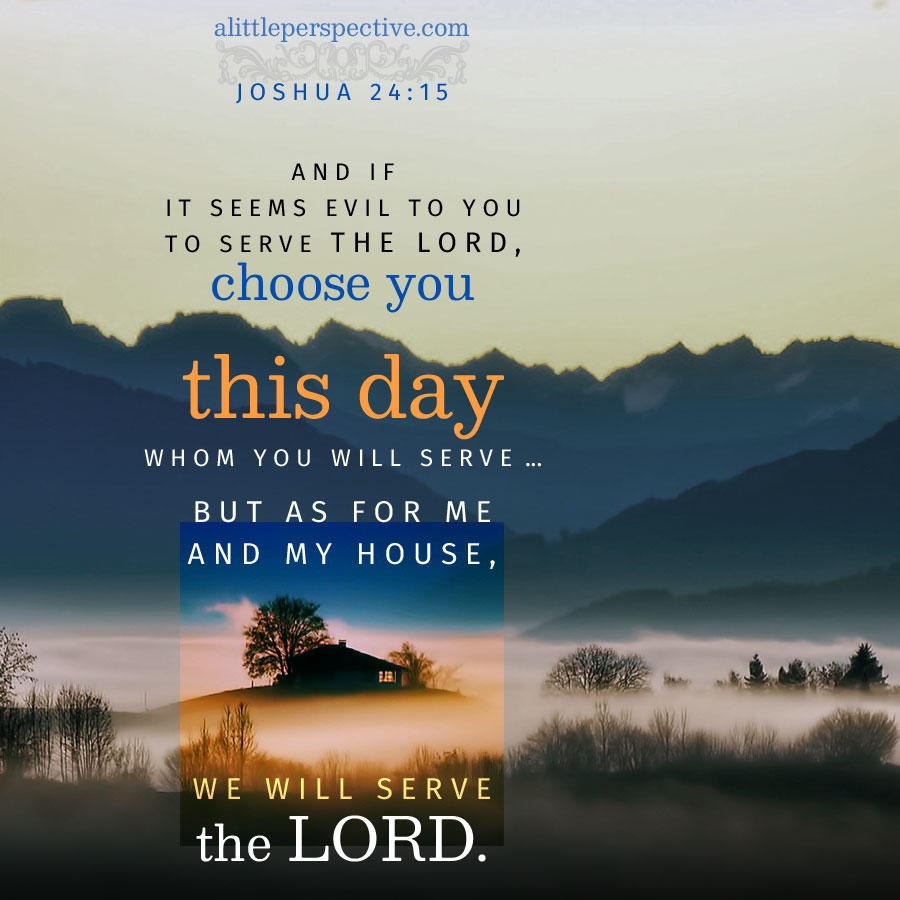 One theme of the final chapter of Joshua might be called, The Vital Importance of Godly Leaders.

“And if it seems evil to you to serve the LORD, choose for yourselves this day whom you will serve, whether the gods which your fathers served that were on the other side of the River, or the gods of the Amorites, in whose land you dwell. But as for me and my house, we will serve the LORD.” Jos 24:15

Joshua was the leader of the nation, but also the leader of his house. He made the choice for himself, and his house. That is the responsibility and privilege of fathers, the reason God gave them authority. Fathers, do not listen to the lie of the modern age that tells you that exercising your authority over your house, to choose for them, is bad. It is not bad, that is an evil lie; it is good, right, just, and a blessing to have the strongest one of the house exercise his strength and wisdom to provide truth and benefit for the weak ones of his house. The father is the strong one of the house, and as he chooses, so goes the house.

Even if a father chooses to provide no guidance, he has made a choice which exercises authority over his household. He has made the choice of being tossed about in storms, rather than being rooted and grounded in the firm foundation of worship of the One True God. You see, fathers direct, choose, lead. That is what they do, even if they don’t want to do it. It is who they are in the core, nature, and fiber of their being, and they cannot escape it any more than we can jump off a cliff and hope to escape the effect of gravity. The universe does not work that way! Their authority is inherent in them from God. Their choices mark out a path for their children to follow after them.

Now if a father has made a wrong choice, all is not lost for his children. The fathers of Abraham served false gods on the other side of the Euphrates, and Abraham choose differently. We can choose for ourselves; we are not doomed by the choices of our fathers, if they have made wrong choices. Mankind (that means you!) is free to choose to Life, or Death.

I have read Judges before, and here is a sneak peek: Israel does not continue serving the LORD God in the next generation. Once their godly leaders are gone, they drift into the way of all flesh. This is the same principal at work: leaders who lead the people into the way of righteousness, will have people who follow the way of righteousness. When the leaders stop leading, they have made a choice for the flesh and the world, and the followers by and large for the most part, find themselves where their leaders choose them to be, whether that leader is a father leading his children, or a judge or elder leading a nation.

All this is to say, Fathers! Do not ever underestimate the importance of your example, or the necessity of you using the strength of your will, at times, to command your household to go in the way of the LORD that you have chosen (Gen 18:19), since the way of the LORD is the path of life, blessing, and happiness for those you have been charged to shepherd. And do not ever underestimate the enemy’s desire or ability to lie to you in many and diverse ways to prevent you from exercising your authority on behalf of your household!

« why I love homeschooling torah
judges 1 and 2 »