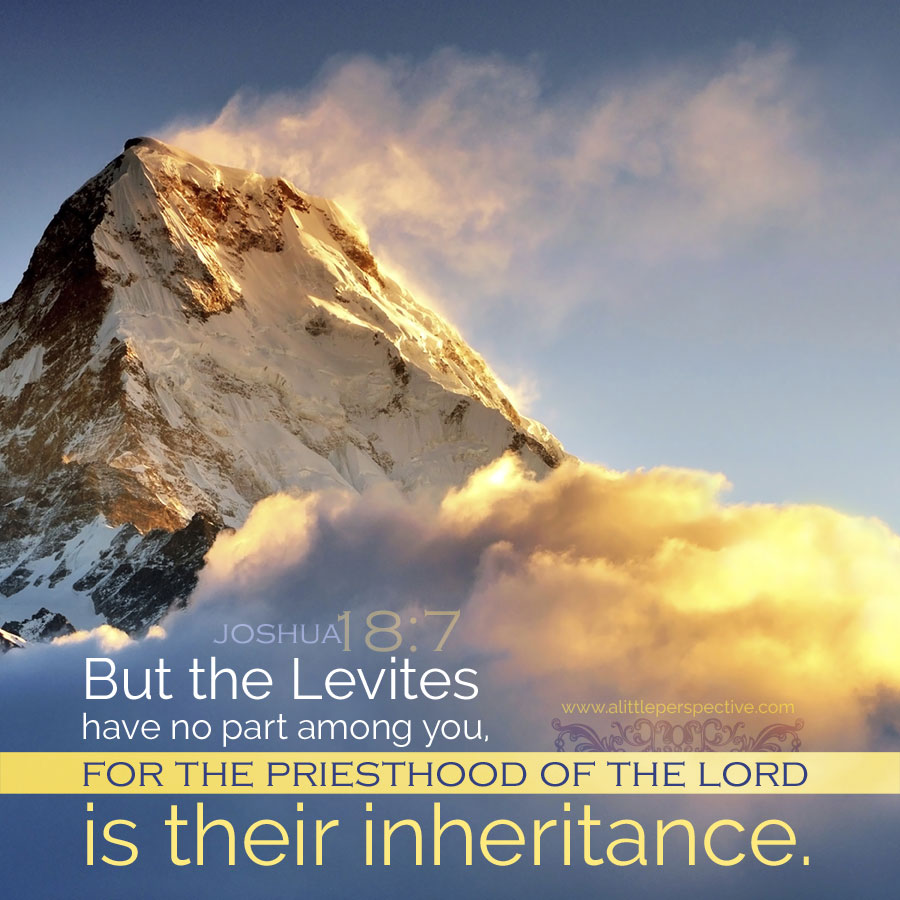 Read Joshua 18 through 20 at Bible Gateway.

The strong themes of these chapters:

There is a chiastic structure which covers several of the chapters that we have been reading:

1e) Jos 18:2, Seven tribes who had not yet received their inheritance;

central axis) Jos 18:7, “But the Levites have no part among you, for the priesthood of the LORD is their inheritance;”

2a) Jos 19:51, These are the inheritances which Eleazar, Joshua, heads divided + they made an end of dividing.

The question I was asking myself this morning, is, why out of all these chapters upon chapters of detail concerning the inheritance of the land, is the central axis Jos 18:7, that the Levites do not receive an inheritance among the tribes because the priesthood of YHVH is their inheritance?

“Priest” is in Hebrew, Strong’s H3548, kohen, כֹּהֵן kaph + hey + nun. In the ancient Hebrew pictographs, the kaph is the open palm, the hand used to bless others rather than to work or fight. The hey is the man with his arms upraised in wonder, surprise, or worship, so look, reveal, breath. The nun is the seed, so also, son, generation, continuation.

The kaph-nun combination paints the picture of the opening (kaph) of the seed (nun), so the going down of the root to provide a firm foundation for the plant above the ground. The verb form, then, means to stand, as the root provides the support that enables the plant to be upright; the concrete noun means a root; and the abstract concept is sureness. The addition of worship (hey) in the central position, the heart of the word, tells us that worship is the heart of our root and our firm foundation.

The dictionaries and lexicons say pages of things about kohen. But when you boil it all down, the priesthood enables the people to worship the LORD their God, who is their root and firm foundation. And today’s central axis reveals that this office, this service, is as valuable as land and the material blessings of this life that land represents. YHVH revealed this same thing to Abraham:

After these things the word of the LORD came to Abram in a vision, saying, “Do not be afraid, Abram. I am your shield, your exceedingly great reward.” Gen 15:1

We have already seen that the one nation Israel was set apart from all other nations, to serve as the “priesthood” nation in all things pertaining to God: Israel received and kept the way and commandments of the LORD; Israel offered sacrifices for the nations every year at Tabernacles; it is from Israel that the word of the LORD goes forth; especially the Word that was made flesh, full of grace and truth: Messiah Yeshua.

And all who have made Jesus Christ Savior and Lord, enter into the office and service of priest:

But you are a chosen generation, a royal priesthood, a holy nation, His own special people, that you may proclaim the praises of Him who called you out of darkness into His marvelous light; 1 Pet 2:9.

We do so by learning to walk in His ways and commandments in our own lives, so that His kingdom may come, beginning with our own households. Kingdoms have kings, Amen? Citizens of kingdoms (that is us) obey their king. Those who do not are outlaws, literally, outside the Law. So when we submit to our King and obey His commandments in our households, we are allowing His kingdom to come in our households. We do so by proclaiming God’s word, by witnessing to the truth, to the Lord Jesus Christ, to everyone who enters our sphere of life; by interceding for them; by bringing them to the place where the Sacrifice of the Spotless Lamb may be applied to their lives; and by making disciples of every nation. He is our inheritance, our exceedingly great reward!