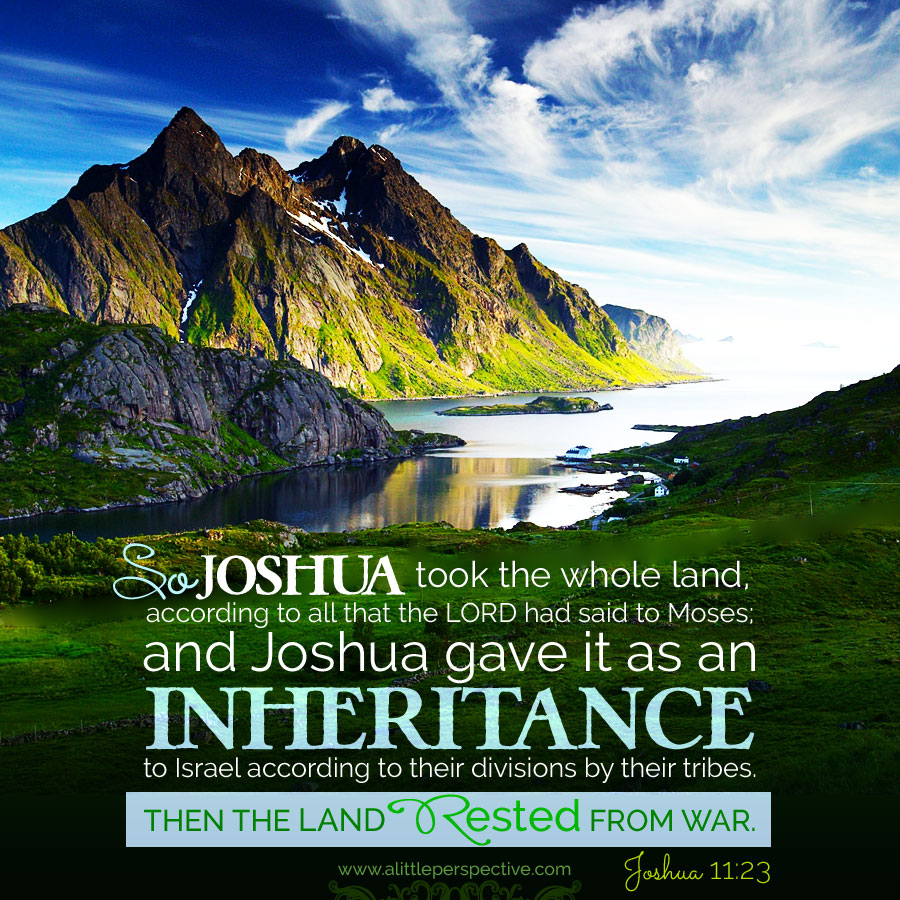 The strong theme from Jos 11:6-12:8 {sx4+p}: Joshua utterly destroyed all: Canaanites east and west + Anakim, gave the land to Israel.

Admittedly, these chapters in the first half of the book of Joshua are some of the difficult passages in Scripture, for us who are 3500 years removed fro:m the society and culture of these times:

And all the spoil of these cities and the livestock, the children of Israel took as booty for themselves; but they struck every man with the edge of the sword until they had destroyed them, and they left none breathing. Jos 11:14

Thus, the charge of genocide is often leveled against the Israelites of the time, and also, ultimately against God, at whose command Joshua did these things (Jos 11:15).

So what does Scripture tell us about the Canaanites whom Joshua conquered?

Then He said to Abram: “Know certainly that your descendants will be strangers in a land that is not theirs, and will serve them, and they will afflict them four hundred years. And also the nation whom they serve I will judge; afterward they shall come out with great possessions. Now as for you, you shall go to your fathers in peace; you shall be buried at a good old age. But in the fourth generation they shall return here, for the iniquity of the Amorites is not yet complete.” Gen 15:13-16

We have seen that the Amorites are one of the seven nations of Canaanites. God told this to Abram before the birth of Ishmael, so God said this about the Canaanites, that their iniquity was increasing but not yet at its maximum limit, a little before BC 1910, when Ussher dates the birth of Ishmael. Joshua led Israel into Canaan beginning in BC 1451 and ceased from his wars in 1445, according to Ussher.

“Do not defile yourselves with any of these things; for by all these the nations are defiled, which I am casting out before you. For the land is defiled; therefore I visit the punishment of its iniquity upon it, and the land vomits out its inhabitants. You shall therefore keep My statutes and My judgments, and shall not commit any of these abominations, either any of your own nation or any stranger who dwells among you (for all these abominations the men of the land have done, who were before you, and thus the land is defiled), lest the land vomit you out also when you defile it, as it vomited out the nations that were before you.” Lev 18:24-28

Lev 18 is the chapter condemning immorality, such as incest, unnatural relations, bestiality, and human sacrifice. The land referred to, which is vomiting out the inhabitants because of these abominable practices, is of course, the land of Canaan.

Molech was a gruesome idol of the Canaanites, whose form was heated red hot, and on whose outstretched arms they laid their children as human sacrifices. According to the International Standard Bible Encyclopedia, he was the planet Saturn deified, in a complex system of astral worship.

“Do not think in your heart, after the Lord your God has cast them out before you, saying, ‘Because of my righteousness the Lord has brought me in to possess this land’; but it is because of the wickedness of these nations that the Lord is driving them out from before you.” Deu 9:4

You shall not worship the Lord your God in that way; for every abomination to the Lord which He hates they [the Canaanites] have done to their gods; for they burn even their sons and daughters in the fire to their gods. Deu 12:31

“When you come into the land which the Lord your God is giving you, you shall not learn to follow the abominations of those nations. There shall not be found among you anyone who makes his son or his daughter pass through the fire, or one who practices witchcraft, or a soothsayer, or one who interprets omens, or a sorcerer, or one who conjures spells, or a medium, or a spiritist, or one who calls up the dead. For all who do these things are an abomination to the Lord, and because of these abominations the Lord your God drives them out from before you.” Deu 18:9-12

So we have the Lord’s word that the Canaanites practiced the worst abominations known to man, as acts of worship. History and archaeology confirm it:

On the Carthaginian worship of Moloch or Saturn, Diodorus (book xx, chapter i) writes: “Among the Carthaginians there was a brazen statue of Saturn putting forth the palms of his hands bending in such a manner toward the earth, as that the boy who was laid upon them, in order to be sacrificed, should slip off, and so fall down headlong into a deep fiery furnace. Hence it is probable that Euripides took what he fabulously relates concerning the sacrifice in Taurus, where he introduces Iphigenia asking Orestes this question: `But what sepulchre will me dead receive, shall the gulf of sacred fire me have?’ The ancient fable likewise that is common among all the Grecians, that Saturn devoured his own children, seems to be confirmed by this law among the Carthaginians.” ISBE, “Astrology”

Carthage was a colony of Phonecians on the northern coast of Africa, originally from Phoenicia, or Sidon, their principal city. Sidon was the firstborn son of Canaan. The Greeks called these people Phoenicians, which means “purple-men,” as they were known to the Greeks for the famous purple dye which they extracted from a sea shell found on their shores. But they named themselves, Kenani, or Canaanites, which the Scripture confirms (Gen 10:15, 10:19). (Side note: Carthage, a very great city, was utterly destroyed by the Romans, who rivaled them for control of the Mediterranean.)

Concerning the archaeological dig at Carthage:

“The most significant part of the American excavations occurred in the Tophet. The word Tophet comes from the Old Testament (e.g., 2 Kgs 23:10; Jer 7:30–32), referring to a place of child sacrifice and burial. Modern excavators applied the term Tophet to a cemetery we excavated bearing remains of children who had been ritually sacrificed as burnt offerings. It is the largest sacrificial cemetery ever found, measuring at least 60,000 square feet. Most stunning is the number of children sacrificed here—estimated at a minimum of 20,000 burials between 400–200 BC during only one-third the life of the cemetery!” John Currid, Abortion: Child Sacrifice Today?, Bible and Spade magazine, Winter 2012.

The bottom line: God’s judgments are just, and righteous altogether. If He, the God who forgives sin and iniquity, had ordered the extinction of the nation because of their very great, and unrepentant sins, then their abominations were very great indeed.

For further reading:
The Dating of Hazor’s Destruction in Joshua 11 – Associates for Biblical Research
Who are the Anakim?