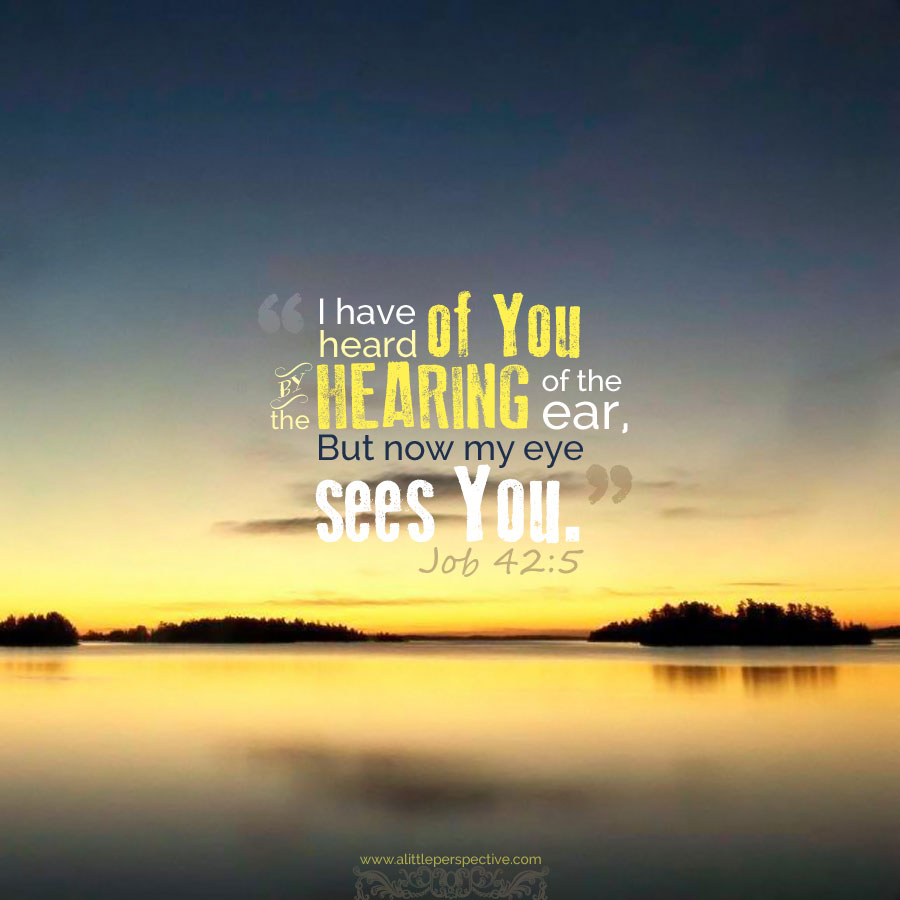 Job 42:1-5 {s} Division at the end of each numbered line, with these {n} divisions within lines:
Job 42:3a, You asked, ‘Who is this who hides counsel without knowledge?’ {n}
Job 42:6 {p} Therefore I abhor myself, and repent in dust and ashes;
Job 42:7 {s} The Lord’s wrath kindled against the three friends for not speaking right of Him as Job has;
Job 42:8-17 {p} Job prays for his friends to be accepted, all his losses restored.

The book of Job reverse parallelism

Many scholars believe that the Torah was compiled later than the events they describe, by several different editors (this theory is called the Documentary Hypothesis and it is widely held today). If this were true, then Torah is just a book written by men. We have plenty of those, and this one can be dismissed just as easily also if that were the case!

Why don’t scholars accept what the Bible says about itself? The plain reading of the Scripture leads us to believe that Moses wrote Exodus at the time that he lived – there is a reason the first five books of the Bible have been known as The Books of Moses for millennia.

In today’s reading, and in the reading we just finished of the history of Joseph, there is much information given of specific events in a well- known and researched part of the ancient world – ancient Egypt. It shouldn’t be too hard to corroborate such detailed history with archaeology. But instead, scholars use archaeology to claim either that the history Moses as an outright fabrication, or that it must be attributed to the Documentary Theory mentioned earlier. Why is that?

Most of the trouble comes from the standard dating of Egyptian chronology, which does not align with biblical chronology.

For example, Exo 1:11 records that the enslaved Hebrews built Pharaoh’s supply cities of Pithom and Raameses. I looked it up in Hebrew, and sure enough, it says Raameses – not a translation error. Well, is there a pharaoh who had those supply cities built? Yes, it turns out:

“The early part of his [Ramesses II or the Great] reign was focused on building cities, temples and monuments. He established the city of Pi-Ramesses in the Nile Delta as his new capital and main base for his campaigns in Syria. This city was built on the remains of the city of Avaris, the capital of the Hyksos when they took over, and was the location of the main Temple of Set.” – Wikipedia entry on Ramesses II

Sounds like the city was built, in part, to be a supply city for military campaigns into Canaan and Syria! But is he a pharaoh who knew not Joseph? Well, there was a native Egyptian royal family who drove out the Hyksos, thus their family was established as the ruling dynasty in Egypt. This dynasty produced some of Egypt’s most famous pharaohs, such as Thutmose III, Hatshepsut, the queen pharaoh, Ankhenaten who tried to turn Egypt’s religion to monotheism, and King Tut.

Tut was just a boy when he ascended the throne, so his regents, the prime minister and the general of the army, ruled for him. When Tut died young without heirs, his regents underwent a series of power struggles, with the general as the one left standing in the end, to found a new dynasty to rule in Egypt.

The general was not of the royal family. He rose to rank in the military because of his ability. Unlike every other pharaoh before him, he had not been educated in Egypt’s history, government, religion, and everything else the heirs were carefully groomed in. Commoners did not receive royal educations. Ramesses II was this man’s descendant. So a new dynasty arose over Egypt, who truly knew not Joseph – they knew nothing of Egypt’s detailed history, the seven years of plenty and famine, the great deliverance Joseph wrought for Egypt, and how all these Hebrews came to be living there.

However, many scholars do not accept the logical conclusions, because standard Egyptian chronology does not align with biblical chronology. Ramesses was supposed to have reigned in the 12th century BC, while the Exodus was to have occurred in 1491 BC, several hundred years earlier. So, man reasons, since the details of the Hebrews’ enslavement really fit details that were not known until the time of Ramesses, the whole thing was written hundreds of years later, and not by Moses at all.

So, man reasons, we have a book written by men, which can then be dismissed.

The Bible- believing scholars, in an effort to honor the Bible’s historicity in its chronology, have put forth various pharaohs no one has ever heard of, from earlier periods, as the pharaohs of Exodus. Their logic does not fit the biblical account – God devastated Egypt so completely, that it soon recovered itself and became the most powerful nation in the world under Ramesses? I think not.

Here is my question: What if the standard Egyptian chronology that they have all worked out, is wrong? Off, by just a couple hundred of years? Or inflated? That is my belief. I do not believe the pharaoh of the Exodus is someone no one ever heard of, and that Egypt grew to even greater glory soon afterward. I do not believe that Exodus was written hundreds of years after the fact by committee. I believe that when we stack the truth of biblical history against ‘secular’ history, biblical history will reveal itself to be true in every instance.

Just thought you should know my bias. ♥