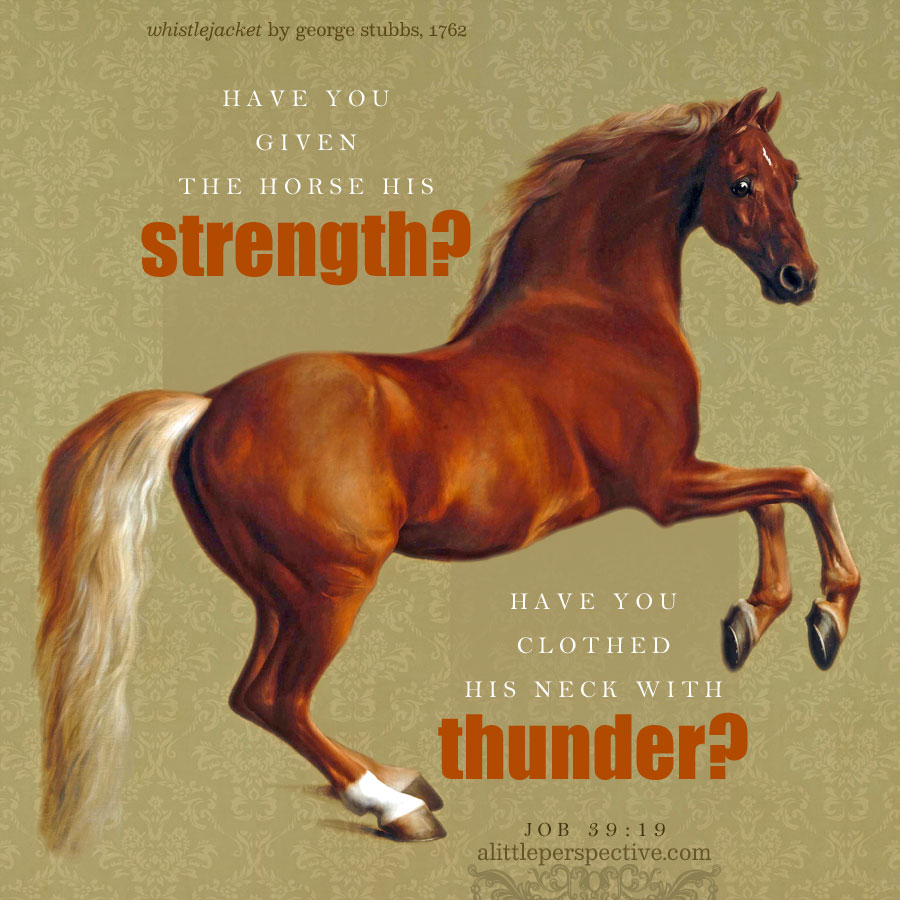 The Hebrew paragraph divisions for each speech are like the divisions in the Psalms that we studied in 2014. There is an understood {s} division at the end of each numbered line, unless marked otherwise, with an {n} division where a new line begins within a numbered line.

Job 40:2 {p} “Shall the one who contends with the Almighty correct Him? He who rebukes God, let him answer it.” {p}

Job 38:4-38 chiastic structure: The glory of God revealed in the creation + hidden wisdom of the universe:

4 “Where were you when I laid the foundations of the earth? Tell Me, if you have understanding.
5 Who determined its measurements? Surely you know! Or who stretched the line upon it?
6 To what were its foundations fastened? Or who laid its cornerstone,
7 When the morning stars sang together, And all the sons of God shouted for joy?

8 “Or who shut in the sea with doors, When it burst forth and issued from the womb;
9 When I made the clouds its garment, And thick darkness its swaddling band;
10 When I fixed My limit for it, And set bars and doors;
11 When I said, ‘This far you may come, but no farther, And here your proud waves must stop!’

1b) Job 38:12-18a, Have you commanded the morning/ comprehended the depth + breadth of the earth;

12 “Have you commanded the morning since your days began, And caused the dawn to know its place,
13 That it might take hold of the ends of the earth, And the wicked be shaken out of it?
14 It takes on form like clay under a seal, And stands out like a garment.
15 From the wicked their light is withheld, And the upraised arm is broken.
16 “Have you entered the springs of the sea? Or have you walked in search of the depths?
17 Have the gates of death been revealed to you? Or have you seen the doors of the shadow of death?
18a, Have you comprehended the breadth of the earth?

central axis) Job 38:19-20, “Where is the way to the dwelling of light? And darkness, where is its place, that you may take it to its territory, that you may know the paths to its home?;”

22 “Have you entered the treasury of snow, Or have you seen the treasury of hail,
23 Which I have reserved for the time of trouble, For the day of battle and war?
24 By what way is light diffused, Or the east wind scattered over the earth?
25 “Who has divided a channel for the overflowing water, Or a path for the thunderbolt,
26 To cause it to rain on a land where there is no one, A wilderness in which there is no man;
27 To satisfy the desolate waste, And cause to spring forth the growth of tender grass?
28 Has the rain a father? Or who has begotten the drops of dew?
29 From whose womb comes the ice? And the frost of heaven, who gives it birth?
30 The waters harden like stone, And the surface of the deep is frozen.

31 “Can you bind the cluster of the Pleiades, Or loose the belt of Orion?
32 Can you bring out Mazzaroth in its season? Or can you guide the Great Bear with its cubs?
33 Do you know the ordinances of the heavens? Can you set their dominion over the earth?

34 “Can you lift up your voice to the clouds, That an abundance of water may cover you?
35 Can you send out lightnings, that they may go, And say to you, ‘Here we are!’?
36 Who has put wisdom in the mind? Or who has given understanding to the heart?
37 Who can number the clouds by wisdom? Or who can pour out the bottles of heaven,
38 When the dust hardens in clumps, And the clods cling together?