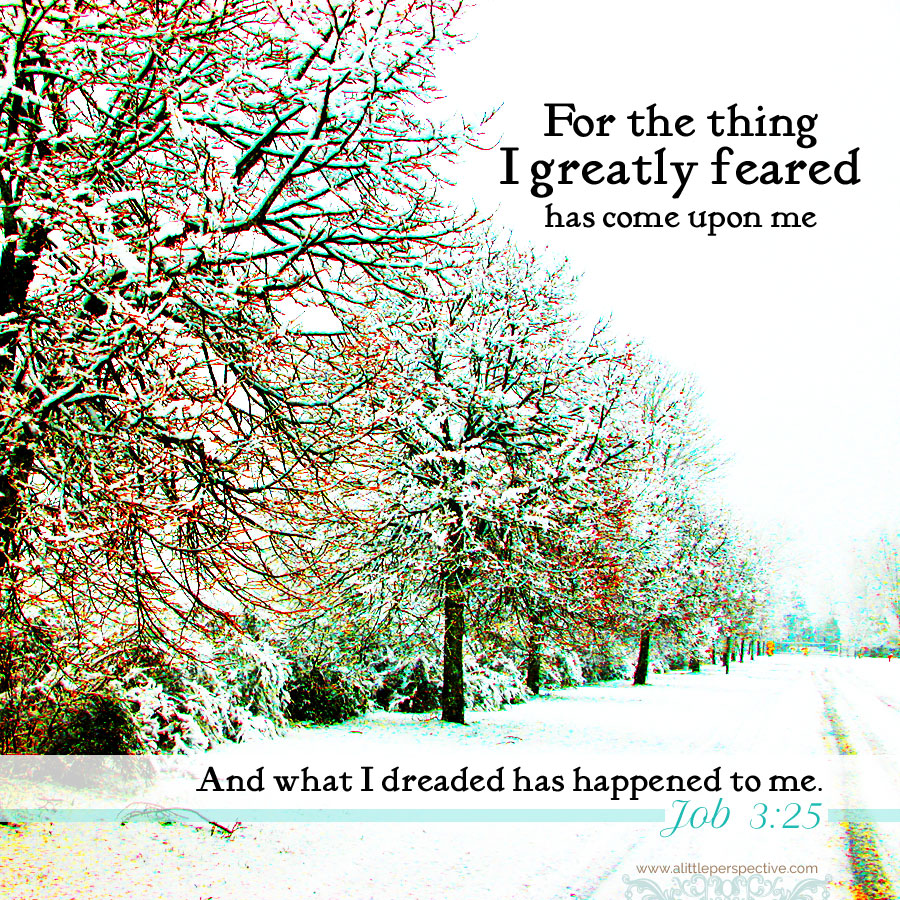 Read Job 3 and 4 at Bible Gateway.

The Hebrew paragraph divisions for each man’s speech is like the divisions in the Psalms that we studied in 2014. There is an understood {s} division at the end of each numbered line, with an {n} marking where a new line begins within a numbered line.

Job reveals something telling in his first speech. He says,

“For the thing I greatly feared has come upon me, and what I dreaded has happened to me.” Job 3:25

What Job feared and dreaded, was loss, for he lost his wealth, his possessions, his children, and his health. This was the exact thing that Satan zeroed in on in order to try to accomplish his goal of getting Job to curse God and die … to leave the way of righteousness he had walked in his entire life, and to accuse God of wrongdoing (Job 1:22). For when the calamity first began to come upon Job, he fell to the ground and worshiped God, the Scripture tells us, and he did not sin or charge God with wrong.

Why is it is sin to charge God with wrong? Because God is perfect in all His ways, and He Himself does not sin or do wrong. All His ways are right and just.

He is the Rock, His work is perfect; for all His ways are justice, a God of truth and without injustice; Righteous and upright is He. Deu 32:4

But in our day and age, it is common to hear people accusing God of wrongdoing and charging Him with injustice because calamities happen on this side of heaven. Remember, when Adam and Eve sinned in the Garden, the ease of life that God created and prepared for us, and desired us to remain in with Him, went away. We bowed our knee to the word of the enemy, but he does not love us or plan for our good or blessing, but our harm instead.

God had maintained a hedge of protection about Job so that the enemy could do nothing to him (Job 1:10), and it was only when an opening was made in this hedge, that the enemy could bring something against Job – but only to the limit that God had established. Now, why does God allow the enemy to sift us like wheat, at pivotal times in our life?

There are always pockets of dross in our lives. For Job, he greatly feared loss, and I believe it was a greater fear for him than the fear of God. We are to fear nothing, other than God. In order to secure God’s blessing to himself and prevent the loss he feared, he lived an upright life before God. Now I do believe that living an upright life because you fear loss and desire blessing and prosperity to come on you instead, is better than living an unrighteous life. But the best is to live an upright life because you love and fear God, because that is what He asks regardless of what it gets you in this life. That was a bit of dross in Job’s life.

In the old days, wheat was sifted to separate the chaff, the unedible part, from the kernel, the usable part. Ore is smelted with heat, because it separates the dross, the impurities, from the silver. Are we seeing a pattern? God can allow us to be tested, as He allowed Job to be tested, in order to refine us as silver is refined.

Calamities cannot be avoided on this side of heaven, unfortunately. But our response to a calamity can go a long way to helping us get through it with dross and chaff successfully removed. Do not make assumptions! Go to God in prayer and ask Him,

“Father, thus and so has happened. Why? What is the upright response? Is this random evil or an attack of the enemy, and am I to take up my authority as a believer and stand against it? Or is this a just consequence of sin in my life? Or is this a test You have allowed to remove dross from my heart? Reveal to me which it is, and where the sin or dross lies, that I may repent of it before You.”