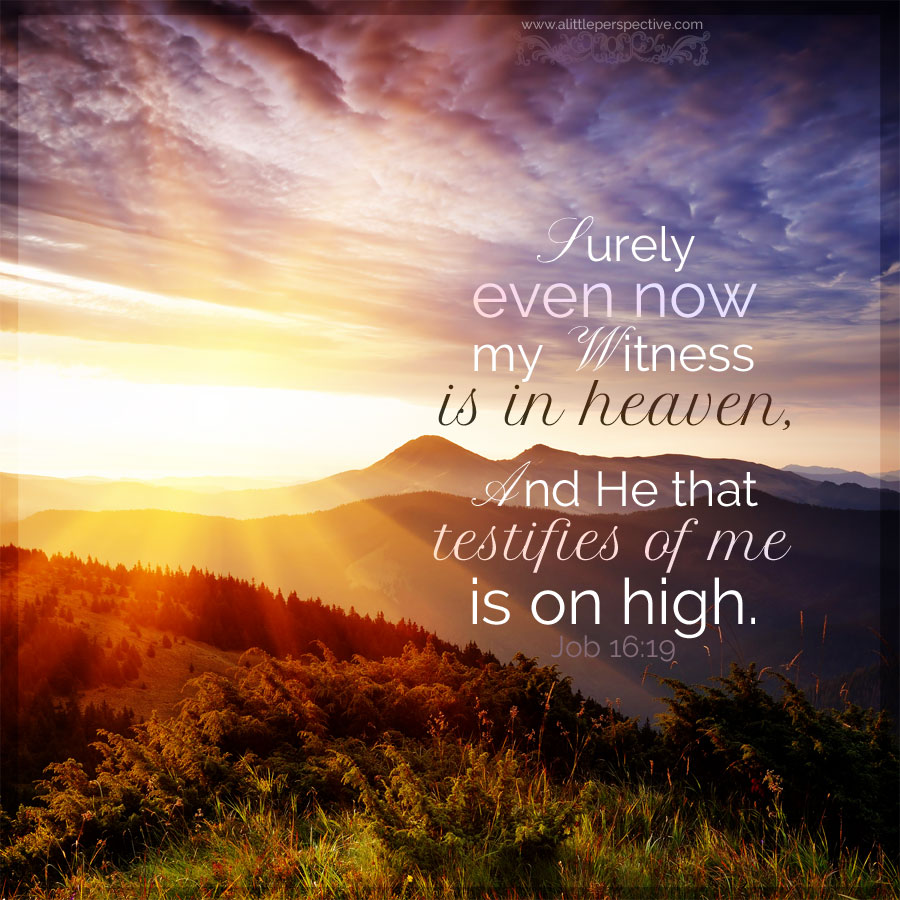 The Hebrew paragraph divisions for each man’s speech are like the divisions in the Psalms that we studied in 2014. There is an understood {s} division at the end of each numbered line; in Job 17-18 there are no {n} divisions.

Bildad repeats Eliphaz’s argument from the previous chapters that the wicked come to ruin. While this is true, the conclusion he draws, the same conclusion that Eliphaz draws, is faulty, that since Job is suffering ruin, he must be secretly wicked.

Job’s speech is interesting, begun in chapter 16 through 17. There are several translation issues, when clarified, make his meaning much more clear:

Job 16:19, Surely even now my witness is in heaven, and my evidence is on high. NKJV

Job 16:19, Surely even now my Witness is in heaven, and He that testifies of me is on high. JPS

With the translation clarified for vs. 19, we can see that it is a matching pair for vs. 8:

Job 16:8, You have shriveled me up, and it is a witness against me; my leanness rises up against me and bears witness to my face.

In other words, his witness on earth is against him: his shriveled body, the wasting away of his strength and flesh. But his Witness in heaven, the LORD God, testifies for him, that his righteousness stands. He is expressing his faith in God continually, despite his circumstances which seem to speak the opposite to him!

What about the section between these two, where Job seems to lodge a bitter complaint about God hating him (Job 16:9)?

Job 16:9, He tears me in His wrath, and hates me; He gnashes at me with His teeth; My adversary sharpens His gaze on me.
Job 16:10 They gape at me with their mouth, They strike me reproachfully on the cheek, They gather together against me.
Job 16:11 God has delivered me to the ungodly, And turned me over to the hands of the wicked.
Job 16:12a I was at ease, but He has shattered me; He also has taken me by my neck, and dashed me to pieces; {n}
Job 16:12b He has set me up for His target,
Job 16:13a His archers surround me. He pierces my heart and does not pity; {n}
Job 16:13b He pours out my gall on the ground.
Job 16:14 He breaks me with wound upon wound; He runs at me like a warrior.

The key is found in that very verse, verse 9: my adversary sharpens his gaze upon me. Who is the adversary? In the Hebrew, “adversary” is satan. The JPS says,

Job 16:9, He hath torn me in His wrath, and hated me; He hath gnashed upon me with His teeth; mine adversary sharpeneth his eyes upon me.

In the JPS they recognize that Job’s adversary is Satan, who sharpens his eyes on him, keeping that pronoun at least lowercase. So what Job is relating is an accurate description from his standpoint: someone who is his adversary hates him and has made him their target. His dilemma comes in, in the universal acknowledgment that the Lord is responsible for his trouble. That logic doesn’t really gel with vs. 19, that He that testifies of him is on high, meaning the Lord. Earlier Job said that though God slay him, yet will Job trust in Him. He is expressing his unshakable faith in the middle of the confusing circumstances that don’t seem to add up.

Do your circumstances likewise not seem to add up to the promises of God or the truth we see in His word? Don’t let the circumstances be the highest authority in your life – trust also in Him, who will see things righted before the end. ♥

« job 15 and 16
restoring the weightier matters of torah, part five »