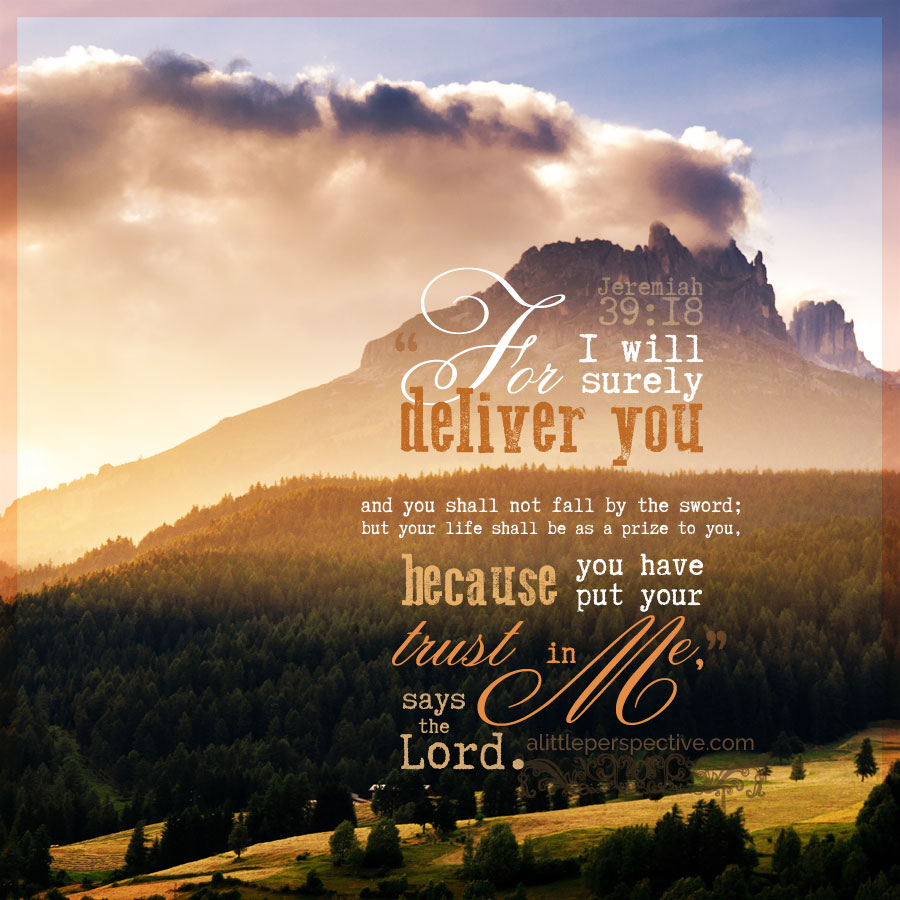 Read Jeremiah 38 and 39 at Bible Gateway.

Jer 38:3-6 {s} His enemies cast him into a miry pit/ King Zedekiah did not withstand them
Jer 38:7-13 {s} One of the king’s slaves petitioned him for Jeremiah, thus he delivered him from the miry pit
Jer 38:14-16 {s} Zedekiah had Jeremiah brought to him at the LORD’s house, and swore to him not to do him harm
Jer 38:17a {s} Then Jeremiah said to Zedekiah
Jer 38:17b-18 {s} If you surrender you shall live + Jerusalem spared, if not you shall not escape + Jerusalem burned
Jer 38:19-23 {s} Fear not, but obey the word of YHVH/ if not, your wives, children, city shall be taken by Babylon
Jer 38:24-26 {p} Zedekiah: tell no one, but if asked, say merely that you presented your case to the king
Jer 38:27-28a {s} The princes asked him, he replied as the king wished/ he remained in prison until Jerusalem taken
Jer 38:28b-39:14 {s} The city of Jerusalem taken, the people carried away captive/ Jeremiah set free
Jer 39:15-18 {p} The word of YHVH to Ebed-Melech: I will deliver you from destruction, for you trust in Me

introduction) Jer 37:1-2, Zedekiah made king by Nebuchadnezzar, but he did not heed the word of YHVH;

1a) Jer 37:3-13 Jeremiah consigned to prison for the word of YHVH that Babylon would take the city;

1a) Jer 37:6-7, The word of YHVH: Pharaoh’s army which has come to help you shall return to their own land;
1b) Jer 37:8 {p} The Chaldeans shall come back + fight against this city + take it and burn it with fire;
central axis) Jer 37:9a, Thus says YHVH: ‘Do not deceive yourselves that the Chaldeans have departed from you;
2b) Jer 37:9b-10, For they will not depart; they will rise up and burn this city with fire;
2a) Jer 37:11 {s} When the Chaldean army left the siege of Jerusalem for fear of Pharaoh’s army;

1c) Jer 37:12-14, Jeremiah departed the city, but was accused of defecting to the Chaldeans because of YHVH’s word;
1d) Jer 37:15-16, The princes were angry + consigned Jeremiah to the prison dungeon;
1e) Jer 37:17a, King Zedekiah sent + took him out/ his petition to Jeremiah for the word of YHVH;
1f) Jer 37:17b, YHVH’s word: “You shall be delivered into the hand of the king of Babylon;”
central axis) Jer 37:18, “Moreover Jeremiah said to King Zedekiah, ‘What offense have I committed against you, against your servants, or against this people, that you have put me in prison?’”
2f) Jer 37:19, Where are your prophets who prophesied to you: the king of Babylon would not come against you;
2e) Jer 37:20, Jeremiah’s petition to King Zedekiah for redress from his prison confinement;
2d) Jer 37:21, King Zedekiah commanded Jeremiah kept in the court of the prison (rather than the dungeon);
2c) Jer 38:1-2 {s} The men heard the word Jeremiah had spoken, that he who defected shall ransom his life;
2b) Jer 38:3, That the city shall be given into the hand of the king of Babylon’s army, which shall take it;
2a) Jer 38:4-6 {s} The princes sent to Zedekiah for the fate of Jeremiah/ Jeremiah cast into a miry pit;

1b) Jer 38:4-6 {s} The princes petitioned for Jeremiah’s death/ the king’s reply/ Jeremiah cast into the pit;

central axis) Jer 38:7a, “Now Ebed-Melech the Ethiopian, one of the eunuchs, who was in the king’s house, heard that they had put Jeremiah in the dungeon;”

2b) Jer 38:7b-13a, Ebed-Melech petitioned for Jeremiah’s release/ the king’s reply/ Jeremiah delivered from the pit;

1b) Jer 38:4-13 {s+s} The princes involve themselves in Jeremiah’s fate/ Jeremiah delivered;

central axis) Jer 38:19, “And Zedekiah the king said to Jeremiah, ‘I am afraid of the Jews who have defected to the Chaldeans, lest they deliver me into their hand, and they abuse me;’

1a) Jer 38:25, Zedekiah: If the princes ask you about this, and promise not to put you to death;
central axis) Jer 38:26 {p} Tell them you merely presented your request of false imprisonment before the king;
2a) Jer 38:27, The princes came to Jeremiah + asked; he told them as he had been instructed by the king;

2a) Jer 38:28a {s} Jeremiah remained in the court of the prison until the day that Jerusalem was taken.

1a) Jer 38:28b, And Jeremiah was in the court of the prison when Jerusalem was taken;

1b) Jer 39:1-5a, Jerusalem taken + princes of the Babylonians sat in the Middle Gate;

1a) Jer 39:1, In the 9th year 10th month of Zedekiah, Nebuchadnezzar’s army besieged Jerusalem;
1b) Jer 39:2, In the 11th year 4th month 9th day of Zedekiah, the city was penetrated (Babylonians entered);
central axis) Jer 39:3, The princes of Babylon came in + sat in the Middle Gate;
2b) Jer 39:4, When Zedekiah saw it, he + warriors fled the city by night, toward the plain (Judeans exited);
2a) Jer 39:5a, Nebuchadnezzar’s army pursued Zedekiah, warriors + overtook them in plains of Jericho;

1c) Jer 39:5b-7, Nebuchadnezzar king of Babylon pronounced judgment on Zedekiah + nobles of Judah in Hamath;

1d) Jer 39:8, The Chaldeans burned the king’s house + houses of the great with fire/ broke down the city walls;

2c) Jer 39:11-12, Nebuchadnezzar king of Babylon pronounced judgment concerning Jeremiah to do him no harm;

2b) Jer 39:13, Nebuzaradan captain of the guard sent the chief officers of the Babylonians;

What spoke to me today was that even though the prophesied judgment was accomplished against the city of God’s people, the meek, poor, and those who did rightly did not perish in it. Jeremiah was released from prison and allowed to go home; the poor of the land had vineyards and fields given to them, and the LORD gave the palace servant of King Zedekiah’s, Ebed-Melech, his life, because out of all who dwelt in Jerusalem, he was the only one who spoke on Jeremiah’s behalf to the king. Meanwhile, the king’s sons were slain, and he and his family taken to captivity, but he did wickedly in the sight of the LORD, the Bible says. The princes of Judah who struck Jeremiah and put him in dungeons and miry pits were put to death before Nebuchadnezzar. The palace and the houses of the great were burned … the same who the LORD prophesied against for oppressing His sheep. Yes the temple was burned too … but we saw in Ezekiel, that the temple was full of uncleanness and idolatry. At least now the city was purified by fire, as the prophets had proclaimed it would be. To me, it says, I cannot control what others in my nation do. I can only keep shining a light of witness and encourage repentance and obedience. But even if disaster were to befall us (and I do believe the spirit of repentance is sweeping the household of God), God is able to deliver all those who put their trust in Him. ♥