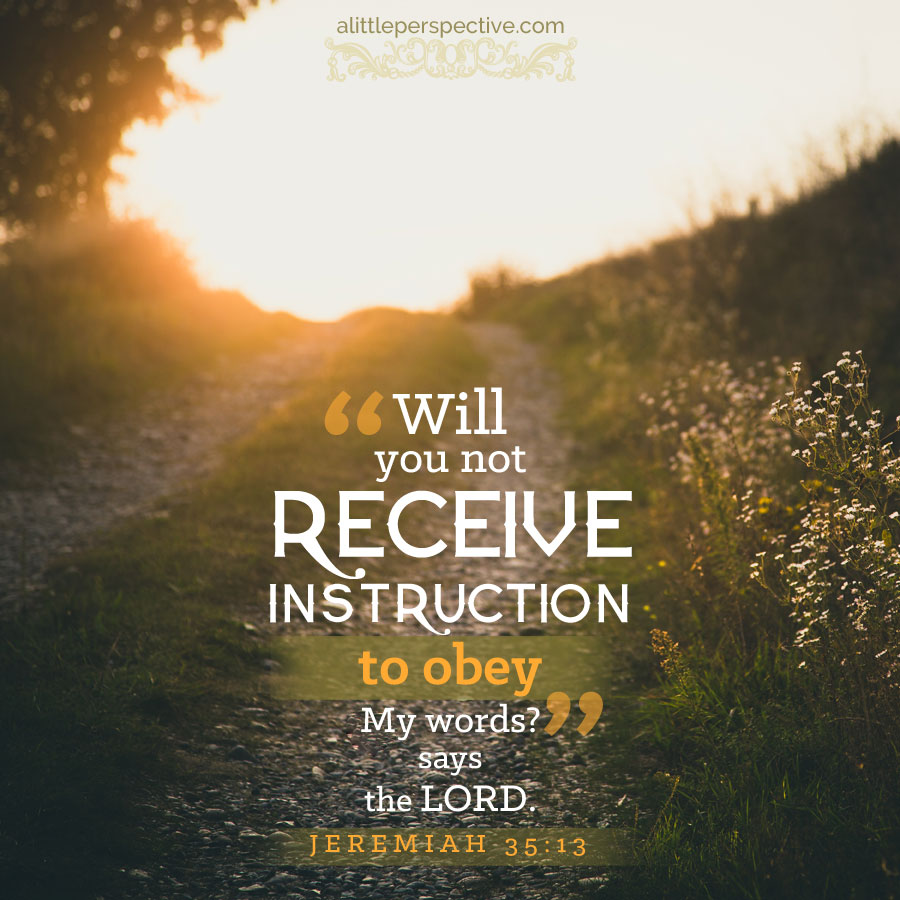 Jer 35:1-11 {p} YHVH: Set wine before the Rechabites/ they would not drink, but obeyed their father’s command
Jer 35:12-19 {p} The Rechabites obey their father, but Judah + Jerusalem has not obeyed My word

Jer 22:1-5 {p} King of Judah: Execute righteousness, and you will endure, but if not, your house will be desolate
Jer 22:6-9 {s} King of Judah: I will make you a wilderness, because you have forsaken the covenant of your God
Jer 22:10-12 {s} Shallum, king of Judah, who was taken captive, shall not return but die in the land of his captivity
Jer 22:13-17 {s} Woe to him who build by injustice: Josiah did justice + it was well, but you practice oppression
Jer 22:18-19 {s} Therefore Jehoiakim king of Judah shall not be lamented but cast out beyond the gates of Jerusalem
Jer 22:20-27 {p} I spoke to you in your prosperity but you would not hear/ Coniah your son given to his enemies
Jer 22:28-29 {p} Record Coniah as childless, for none of his descendants shall sit on the throne of David

1b) Jer 22:6-9 {s} King of Judah: I will make you a wilderness, because you have forsaken the covenant of your God;

1e) Jer 22:15b, Did not your father eat and drink, and do justice and righteousness?

central axis) Jer 22:16a, He judged the cause of the poor and needy;

2c) Jer 22:18-19 {s} Therefore Jehoiakim king of Judah shall not be lamented but cast out beyond the gates of Jerusalem;

2a) Jer 22:28-29 {p} Record Coniah as childless, for none of his descendants shall sit on the throne of David.

Please notice the E pair! To the LORD, doing justice and righteousness (defined by way of commandment in Torah) is the definition of knowing Him!

When Josiah was killed, the people quickly placed his son Jehoahaz (Shallum) on the throne, for fear that Pharaoh would invade their country in the absence of a king. This king served all the idols which his father had pulled down, which called forth Jeremiah’s entreaties to return to the LORD.

It was not long before Jeremiah’s prophecy was fulfilled. The Egyptians, angry that Judah had interfered in its war with Babylon, attacked Jerusalem, removed Jehoahaz from being king, and placed his brother Jehoiakim on the throne instead (610 BC). Pharaoh took Jehoahaz in chains to Egypt, where he remained in prison until he died.

When the war was ended, however, he marched against Jerusalem and put Jehoiakim to death in the way that Jeremiah had foretold (Jer 22:18-19, 599 BC). He installed his son Jeconiah as king of Judah upon the condition that he would be vassal to Babylon. Nebuchadnezzar again departed Jerusalem without destroying the city — for the second time. Jeconiah was only eight years old when he began to reign, and as his courtiers and advisers were neither good nor wise, the king continued in the evil way of his father, and this was the state of affairs when Jeremiah prophesied that Jeconiah would die a captive in another land not his own (Jer 22:26-27).

This chapter was written at a time when Jeconiah was king in his father’s place (Jer 22:24). The reason it seems to also be speaking as if Jehoiakim was still king before his death, was that the first part of the chapter was in the scroll that Jehoiakim burned. After that, the LORD commanded Jeremiah to write the scroll again, with all the words that were on the first scroll (Jer 36:28). When he did, he added the prophecy about Jeconiah, so show the king that what had been prophesied about both his uncle and his father had come to pass, therefore what was prophesied about Jeconiah would also come to pass, unless he repent.