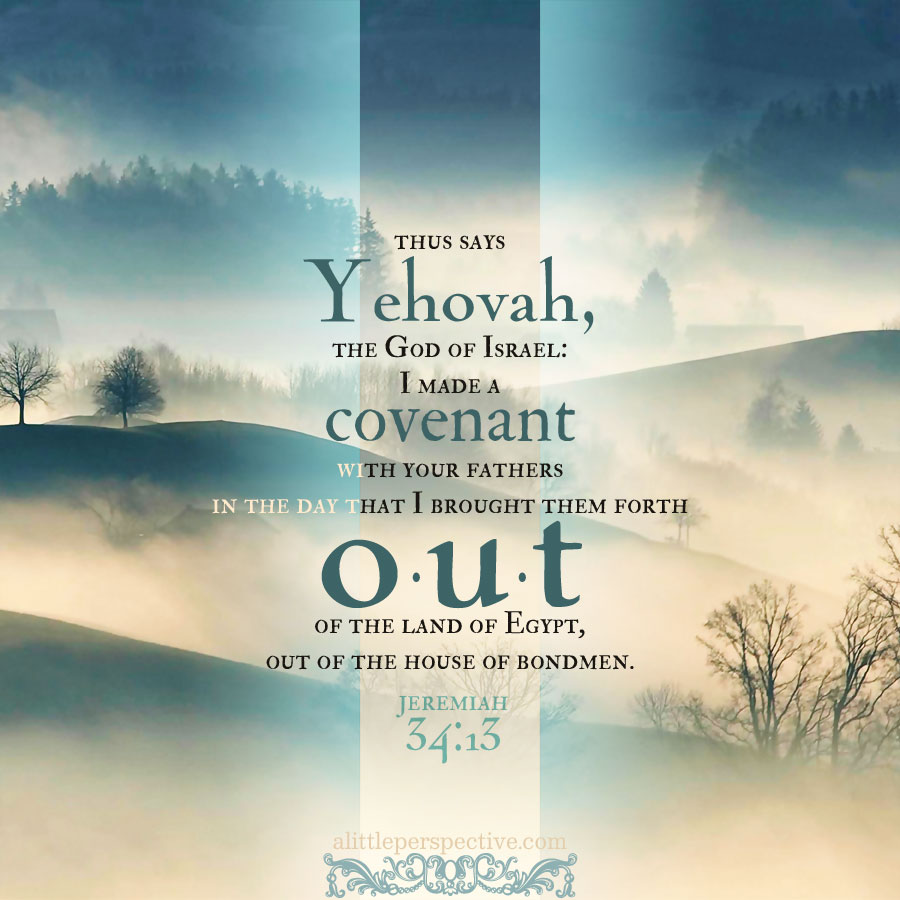 Jer 34:1-5 {s} Zedekiah king of Judah shall be taken to Babylon, but will not die by the sword, but in peace
Jer 34:6-7 {p} Jeremiah spoke this word to Zedekiah when the Babylonians fought against Jerusalem
Jer 34:8-11 {p} Zedekiah’s covenant to set free Hebrew slaves, however they transgressed and enslaved them again
Jer 34:12-16 {s} Thus says YHVH, this is what I commanded you when I set you free from bondage in Egypt
Jer 34:17-22 {p} You have not done right, therefore I set you free to go to the sword, pestilence and famine

1c) Jer 34:8-10, King Zedekiah made a covenant with the people, to proclaim liberty to the Hebrew slaves;

1f) Jer 34:14a, At the end of seven years let every man set free his Hebrew brother who has been sold to him;

central axis) Jer 34:14b, But your fathers did not obey Me nor incline their ear;

2f) Jer 34:15a, Then you turned + did right—every man proclaiming liberty to his neighbor;

2c) Jer 34:17-20, The men who have transgressed My covenant, not obeying Me in proclaiming liberty;

1a) Jer 34:17a, Therefore thus says YHVH: You have not obeyed Me in proclaiming liberty;
central axis) Jer 34:17b, Every one to his brother and every one to his neighbor;
2a) Jer 34:17c, Behold, I proclaim liberty to you, says YHVH—to the sword, to pestilence, and to famine!;

1b) Jer 34:17d, And I will deliver you to trouble among all the kingdoms of the earth;
central axis) Jer 34:18-19, “And I will give the men who have transgressed My covenant, who have not performed the words of the covenant which they made before Me, when they cut the calf in two and passed between the parts of it— the princes of Judah, the princes of Jerusalem, the eunuchs, the priests, and all the people of the land who passed between the parts of the calf—”
2b) Jer 34:20a, I will give them into the hand of their enemies + those who seek their life;
2a) Jer 34:20b, Their dead bodies shall be for meat for the birds of the heaven + beasts of the earth;

2b) Jer 34:21, I will give Zedekiah + princes into the hand of their enemies—the king of Babylon’s army;

Nebuchadnezzar besieged Jerusalem three separate times, because they would not remain vassals to Babylon. Each time, the king of Judah repented and Nebuchadnezzar went away from them. On the third siege, however, when Zedekiah was king, Nebuchadnezzar had enough of the rebellions of the kings of Judah, and it was his intent to overcome the city and remove the house of David from being king.

It was on this occasion that Zedekiah sent to Jeremiah for a word from the LORD, hoping that the LORD would do something miraculous for Judah to deliver them from Nebuchadnezzar’s hand. Yes, this is the same King Zedekiah who had previously kept Jeremiah in prison for prophesying that God was sending Nebuchadnezzar against Jerusalem to punish Jerusalem for forsaking her covenant with the Him.

“Thus says the LORD, the God of Israel: ‘I made a covenant with your fathers in the day that I brought them out of the land of Egypt, out of the house of bondage, saying, “At the end of seven years let every man set free his Hebrew brother, who has been sold to him; and when he has served you six years, you shall let him go free from you.” But your fathers did not obey Me nor incline their ear.’” Jer 34:13-14

“Then you recently turned and did what was right in My sight—every man proclaiming liberty to his neighbor; and you made a covenant before Me in the house which is called by My name.”  Jer 34:15

We have been ingrained with a negative view of Torah, but why? It is true that we are not saved by obedience or by works of the Law. No one is suggesting that we are. But now that we are saved, why is it wrong to learn Torah, so that we might learn God’s definition of righteous behavior and sinful behavior, so that we can order our steps rightly? So that we can live in this world in a way that is right in the sight of the LORD?

In all the years I have been teaching the Scriptures, no one has yet answered that question for me. Paul told us that the things that happened to Israel in her history, happened for our sake, to be an example for us (1 Cor 10:6-11). Well, look at the example of Judah under King Zedekiah: they were saved from slavery in Egypt, before they had done anything good or bad. God delivered them by the blood of the passover lamb before they ever heard one definition of righteousness or sin. But when they pledged themselves to God, to be His people, He asked them to walk in His ways of righteousness, and to do what was right in His sight.

That is obedience to Him– to His commandments. They refused. They brought destruction on themselves because of it. Let us not do likewise!