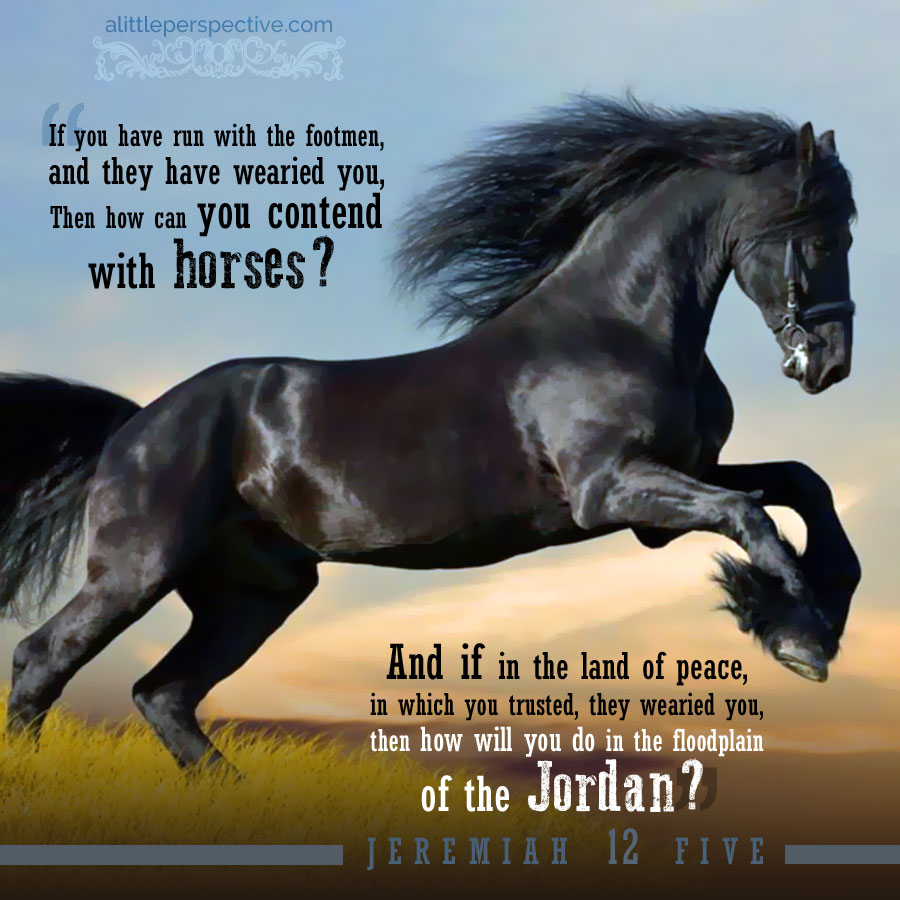 Jer 11:1-5 {p} Speak to Judah: Cursed is he who does not obey the LORD’s voice
Jer 11:6-8 {s} Do My covenant/ Your fathers did not, therefore I am bringing the words of the covenant upon you
Jer 11:9-10 {s} Judah + Jerusalem, and Israel, have broken My covenant which I made with their fathers
Jer 11:11-13 {s} Judah will cry out to YHVH + their idols because of their calamity, but He will not listen to them
Jer 11:14 {s} Do not pray for them in their calamity, for I will not hear them when they cry to Me
Jer 11:15-17 {p} The LORD who planted you will break off your branches
Jer 11:18-20 {s} Jeremiah trusted his cause to the LORD when men plotted against him
Jer 11:21 {p} The men of Anathoth threaten Jeremiah with death if he prophesies
Jer 11:22-23 {s} The LORD will punish the men of Anathoth
Jer 12:1-3 {p} The wicked prosper for the slaughter, while the righteous are tested continually
Jer 12:4-6 {s} The land mourns because of wickedness/ If you are wearied in peace, how will you do in trouble?
Jer 12:7-12 {s} Rulers have destroyed My beloved, desolate, it mourns to Me/ The plunderers have come + no peace
Jer 12:13 {p} They have sown wheat but reaped thorns/their labor does not profit because of YHVH’s anger
Jer 12:14-17 {s} The nations who do not obey the LORD will be utterly destroyed
Jer 26:1-6 {p} YHVH sent Jeremiah to prophesy His word in the court of the Temple, so that He may relent of calamity
Jer 26:7-10 {s} Priests, prophets, people seized Jeremiah to put him to death/ princes of Judah sat to render judgment
Jer 26:11-15 {s} The priests’ accusation + Jeremiah’s defense, before the princes of Judah
Jer 26:16-24 {p} The people + elders spoke in defense of Jeremiah/ his acquital

The chiastic structure of chapters 11 and 12:

1a) Jer 11:11, Calamity is coming, and though they cry out to Me, I will not listen to them;
1b) Jer 11:12, Judah + Jerusalem will cry to their gods, but they will not save them in their time of trouble;
central axis) Jer 11:13 {s} “For according to the number of your cities were your gods, O Judah; and according to the number of the streets of Jerusalem you have set up altars to that shameful thing, altars to burn incense to Baal;”
2b) Jer 11:14a, Do not pray for this people, or lift up a cry or prayer for them;
2a) Jer 11:14b {s} For I will not hear them in the time that they cry out to Me because of their trouble;

central axis) Jer 11:21 {p} “Therefore thus says the LORD concerning the men of Anathoth who seek your life, saying, ‘Do not prophesy in the name of the LORD, lest you die by our hand’—”;

2d) Jer 12:1-3 {p} The wicked prosper for the slaughter, while the righteous are tested continually;

2c) Jer 12:4-12 {s} The land mourns because of wickedness, its shepherds have made it desolate;

2b) Jer 12:13 {p} Their wickedness has not profited them for the plunderers are coming;

This prophecy took place early in Jeremiah’s calling, while he was still just a local prophet in his hometown, the city of Anathoth. The LORD desired to expand his sphere of influence and instructed him to take his message, that the curse of the covenant was coming upon Judah because they have not obeyed the LORD’s voice, and have broken the LORD’s covenant without repentance, to all the cities of Judah and to Jerusalem. Of course Jeremiah began preaching this message in his hometown, in Anathoth.

We discover that his message so disturbed his hometown, that the men of Anathoth plotted against Jeremiah to take his life from him, if he continued to prophesy in the name of the LORD. The leaders of this plot were his own brothers! Now let’s examine this: Anathoth was a city of the Levites from the tribe of Benjamin — not just any Levites, but specifically given to the family of Aaron (Jos 21:18). It could very well be that the priests, the Aaronites, were the men of Anathoth who plotted against Jeremiah.

They may have thought, that since the LORD’s Temple where He caused His name to dwell, was established in Jerusalem, that it was akin to blasphemy to pronounce calamity and cursing on Judah and Jerusalem instead of prosperity and blessing. They may have actually considered Jeremiah a false prophet, thus their command that he prophesy no more “in the name of the LORD.” They may have actually thought, that they were doing the LORD’s work by planning to put him to death!

In fact, the central axis of these two chapters is the threat of death that is levied against Jeremiah. Tribulation arose for Jeremiah for the Word’s sake, as Jesus explained (Mar 4:17). And this is the universal principle: anyone who desires to stand for the truth of the LORD’s Word will attract tribulation and persecution. It has nothing to do with the person, and everything to do with the Word of the LORD that is coming out of their mouth. The enemy seeks to crush the Word by crushing the messenger who proclaims that Word.

The second reality is that the persecution came from the professionals who considered themselves the guardians of the LORD’s truth, and this was the same principle at work with Jesus also. It was the religious leaders who had Him arrested, put Him on trial, and brought Him before the Roman governor.

Jeremiah, when faced with this reality, did not strive in his own defense, but put his trust in the LORD, and the LORD took care of him. The plans of the wicked did not come to pass. They did with Yeshua, but it was the LORD’s will to crush Him. And that is the key: we must seek the LORD and His will, and not a specific outcome for ourselves of easy circumstances. It may be the LORD’s will that we go through trials, so that we gain strength to run with horses and not just footmen. We don’t know — but whatever happens, we can trust that He is on His throne and all things will work out ultimately for our benefit, even if we are martyred for His sake. We can rejoice and give honor unto Him in every instance!