You are here: Home / Bible Study / applied word / isis and the resistance of evil, part two 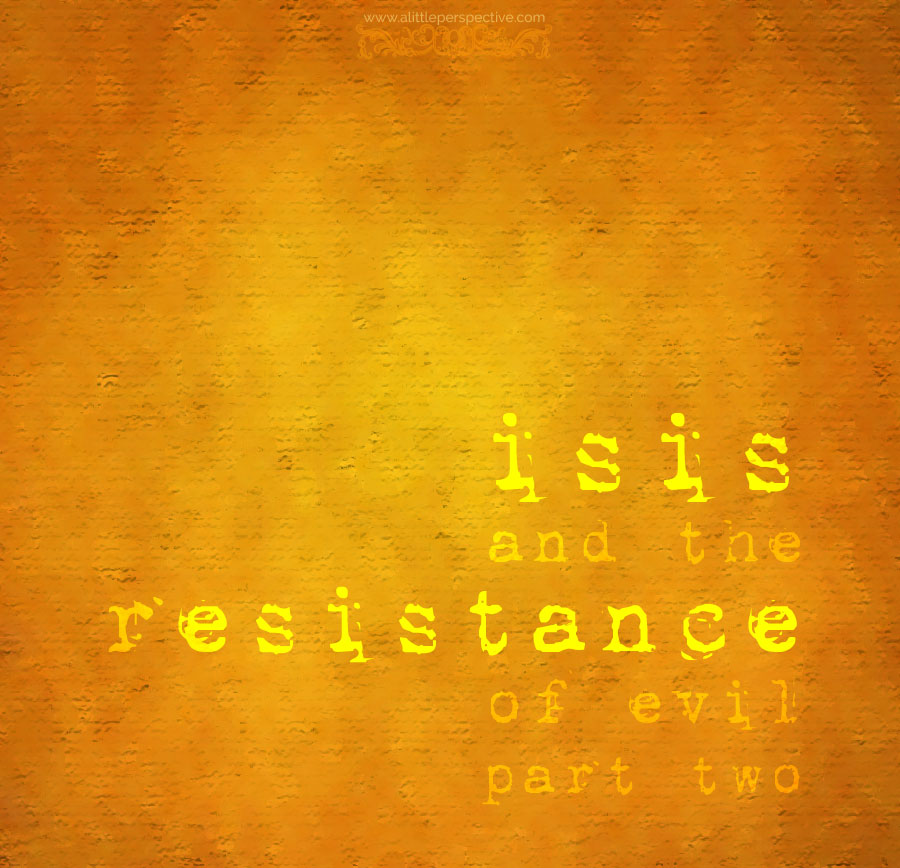 We saw that God charges governments and those in authority to protect those under them. This extends to resisting evil, when evildoers try to harm the innocent and vulnerable.

What is the church’s responsibility? To the church, God revealed the root and source of these evil works:

For we do not wrestle against flesh and blood, but against principalities, against powers, against the rulers of the darkness of this age, against spiritual hosts of wickedness in the heavenly places. Eph 6:12

The evil we are seeing played out in the natural world have its root and source in the spiritual world, with the rulers of the darkness of this age, spiritual hosts of wickedness in the heavenly places. Yes, let governments and authorities go after the problem in the natural, using force to prevent harm when necessary. And let the church go after the problem at its source, in the spiritual. How do we do so?

We wage our own battle of military force in the spiritual:

Therefore take up the whole armor of God, that you may be able to withstand in the evil day, and having done all, to stand. Stand therefore, having girded your waist with truth, having put on the breastplate of righteousness, and having shod your feet with the preparation of the gospel of peace; above all, taking the shield of faith with which you will be able to quench all the fiery darts of the wicked one. And take the helmet of salvation, and the sword of the Spirit, which is the word of God; praying always with all prayer and supplication in the Spirit, being watchful to this end with all perseverance and supplication for all the saints— Eph 6:13-18

After we prepare ourselves with our defensive armor, we take up our offensive weapon – the sword of the Spirit, which is the Word of God. We wield that sword in prayer to this effect:

Now the manifold wisdom of God might be made known by the church to the principalities and powers in the heavenly places, according to the eternal purpose which He accomplished in Christ Jesus our Lord, in whom we have boldness and access with confidence through faith in Him. Eph 3:10-12

I don’t think the enemy or his minions believe that the word of God is true. That would make them believers if they did, and of course, they are not. So we take up our armor, our shield, and our offensive weapon, the word of God, and enforce the truth of the word of God on them. We speak aloud the word of God in prayer. We make the truth of His word – His manifold wisdom – known when we speak it aloud in the name of Jesus, to the principalities and powers in the heavenly places, who must bow their knee to His name (Phi 2:9-10). His word contains creative power to change realities, to cause them to come into line with the truth.

When we do so, His ministers, the angels, are empowered with the might of His word, to bring it to pass even in the face of principalities, powers, and rulers of darkness:

Bless the Lord, you His angels, who excel in strength, who do His word, heeding the voice of His word. Bless the Lord, all you His hosts, You ministers of His, that do His pleasure. Psa 103:20-21

Are they (angels) not all ministering spirits sent forth to minister for those who will inherit salvation? Heb 1:14

In the current crisis with ISIS exterminating Christians, what word do we wield as a sword? Well, we could begin with:

Bless the Lord, O my soul, And forget not all His benefits: who forgives all your iniquities, who heals all your diseases, who redeems your life from destruction, who crowns you with lovingkindness and tender mercies, who satisfies your mouth with good things, so that your youth is renewed like the eagle’s. The Lord executes righteousness and justice for all who are oppressed. Psa 103:2-6

And there are hundreds of other places in Scripture, Old and New Testament, which proclaim the Lord’s power to save from death and destruction. Let us not stand in the way of proper human authorities from protecting the vulnerable against evil, and let us pick up our responsibility as well, and do our part to combat this evil at its root and source, church!