You are here: Home / Perspective / education / introduction to classical education 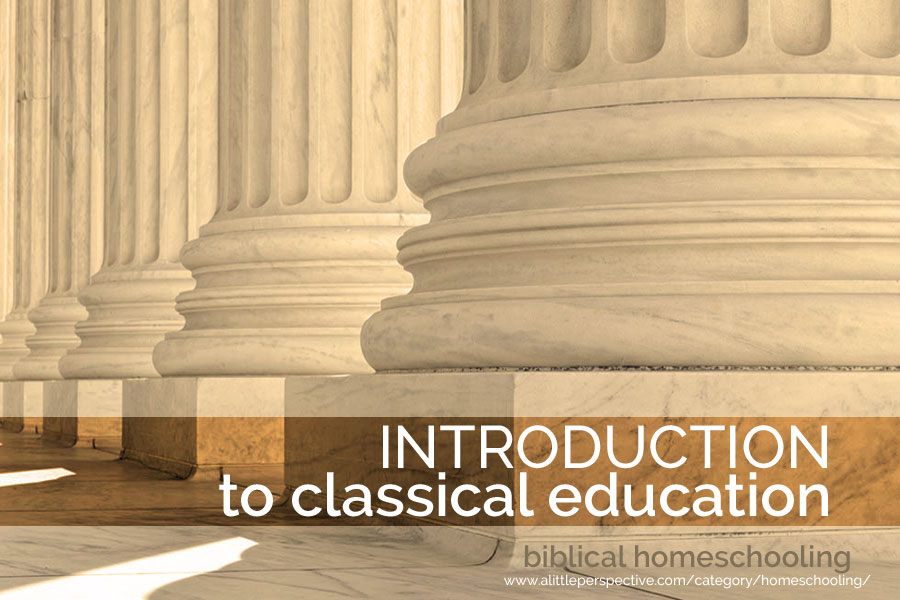 “Though this system [classical education] did not receive the distinct development connoted by its name until the Middle Ages, still it extends in the history of pedagogy both backwards and forwards; for while, on the one hand, we meet with it among the classical nations, the Greeks and Romans, and even discover analogous forms as forerunners in the educational system of the ancient Orientals, its influence, on the other hand, has lasted far beyond the Middle Ages, up to the present time.”

The Seven Liberal Arts by Otto Willmann, The Catholic Encyclopedia

Beginning in Classical Greece and Rome, and continuing through the Puritan and Colonial eras of our nation, children that were fortunate enough to receive an education received a classical one. Classical Education produced Archimedes, St. Paul, St. Patrick and Columba, Dante, Leonardo da Vinci, Galileo, Sir Isaac Newton, Christopher Columbus, Shakespeare, and our own great George Washington, Thomas Jefferson, and John Adams. (Please visit Classical America to gain an idea of the influence of the classical model on our founding fathers and the development of American education.)

These giants of their times are only the tip of the iceberg of the great philosophers, scientists, theologians, writers and artists that lived and worked through the 18th century. They lived up to their potential, and each in their own way impacted the course of human history, because their potential was unlocked in part by Classical Education, which prepared them to grapple with the problems of their day.

more on the history of education

What is Classical Education?

The core of Classical Education is the trivium, which simply put is a teaching model that seeks to tailor the curriculum subject matter to a child’s cognitive development. The trivium emphasizes concrete thinking and memorization of the facts of the subjects in grade school; analytical thinking and understanding of the subjects in middle school; and abstract thinking and articulation of the subjects in high school. Subjects unique to Classical Education which help accomplish the goals of the trivium are Grammar, the science of language usage; Logic, the science of right thinking; and Rhetoric, the science of verbal and written expression. Classical Christian Education is further characterized by rich exposure to the history, art, and culture of Western Civilization, including its languages (Latin and Greek), its philosophy and literature (the Great Books of Western Civilization and the Christian tradition), and the development of a Biblical worldview with Theology in its proper place as the Queen of the Sciences.

Why Return to Classical Education?

The combination of the progression of learning from facts to understanding to expression (the stages of the trivium) and the additional classical subjects, work together to give children the tools to think for themselves and to be independent, life-long learners. That is the primary goal of Classical Education. It is to equip educated men and women able to approach previously unknown subject matter, problems, or life situations; and using the tools of learning which have been practiced and refined and internalized in school; to grasp the subject or problem, analyze it according to the standard of truth, and understand and do something about it. Classical Education therefore trains children for success in any field, whether it be marriage and family life, work dealing with society and individuals, business, or arts and the humanities. Furthermore, Classical Education has proven its effectiveness in training for scientific excellence,* which depend on the arts of fact-finding, analyzation, adherence to truth, and the problem-solving skills of which Classical Education specializes. Secondarily, it works: children taught by this method routinely exhibit academic proficiency.

why return to classical education?
help getting started

back to classical christian homeschooling

Learn to discern God's voice - He is the uplifter

My current projects include the daily #BibleStudy

The conflict with our family of websites and the n