You are here: Home / Bible Study / babel / babylon / goat demons, then and now 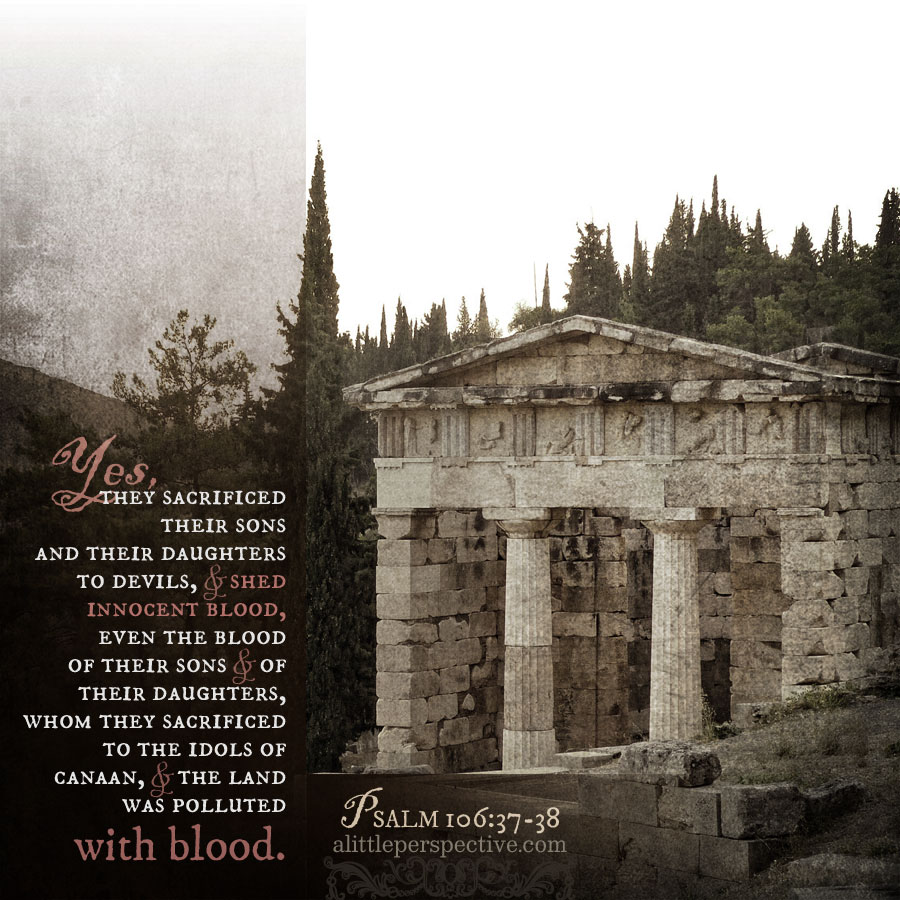 So far, from the Hebrew, and the common theme teaching tool of Scripture, we have seen “sons of God”  refer to humans, as sons of the rulers or judges; and angels. We have seen spiritual principalities of wickedness linked to their human kings as counterparts.

What about the other perfectly acceptable translation, sons of the gods? We have to remember that “gods,” meaning false gods, were not just non-entities in Scripture. They were actual demons.

They sacrificed unto devils, not to God; to gods whom they knew not, to new gods that came newly up, whom your fathers feared not. Deu 32:17

But I say, that the things which the Gentiles sacrifice, they sacrifice to devils, and not to God: and I would that you should not have fellowship with devils. You cannot drink the cup of the Lord, and the cup of devils: you cannot be partakers of the Lord’s table, and of the table of devils.  1 Cor 10:20-21

DEVILS. Strong’s H7700 shade, a concrete noun meaning, “demons;” from Strong’s H7736 שוד shuwd, a primitive root meaning, “to be strong, powerful;” but only in the ability to act with violence, thus “to ruin and lay waste.” The 3-letter root is shin + vav + dalet.

Cognate words from the same primitive root include “breast,” and “slope,” from the shape of a breast. The story, then, is: Two (shin) which (vav, as it is a connecting word linking the two clauses together) hang (dalet, as a door hangs in a doorway). According to the Ancient Hebrew Lexicon, it relates to “devastate” in that breasts which are shriveled and dried up are laid waste.

Furthermore, the Ancient Hebrew Lexicon says of the derived word “demon,” from this verbal root:

A goat-demon, from the teats of the goat.

The idolaters in Israel, and the Gentiles according to Paul, sacrificed to the goat-demon. This is not the goat-demon’s only appearance in Hebrew Scripture:

And they shall no more sacrifice their sacrifices unto the satyrs, after whom they go astray. This shall be a statute for ever unto them throughout their generations.  Lev 17:7

But wild-cats shall lie there; and their houses shall be full of ferrets; and ostriches shall dwell there, and satyrs shall dance there. Isa 13:21

And the wild-cats shall meet with the jackals, and the satyr shall cry to his fellow; yea, the night-monster shall repose there, and shall find her a place of rest.  Isa 34:14

The word translated “satyr” is Strong’s H8163 saiyr, a concrete noun meaning, “kid, goat, goat-devil, satyr;” from Strong’s H8175 שער sa’ar, a primitive root meaning, “to shudder,” especially of the creeping of the skin of a person who is horror-stricken. You can read more about the parable told by the primitive root here.

A quick search on Wikimedia Commons brings up much ancient to modern art depicting the satanic nature of the satyr, or goat-demon. I have collected only a small representative part, as most of it is obscene. Now the Britannica explains the satyr from Greek mythology as a half-man, half-goat divinity, but its appearance in the Hebrew Scriptures, even from the time of Moses, suggests a much more ancient history. Greek mythology says the first satyr, Silenus, was the teacher of Dionysius. We learned from ancient history that Dionysius was the same as Nimrod. And yes, as the founder of paganism, we can believe that his teacher was the goat-demon. Identified with demonic false gods, is it any wonder that the modern cultural icon of satanism is identified with the goat head?

I have to point out, that most of the available information on the goat-demon, known today as Baphomet, in its modern connection to Satanic worship, claims it originated with the Knights Templar during the Crusades, in what I can only assume is an effort to minimize its stigma. Wrong. The evidence of its antiquity, not only from its appearance in the ancient Hebrew of the Torah scroll written by Moses, but also artifacts of ancient art linked above, is undeniable.

What connection does the goat-demon have to rulers or the sons of the rulers from antiquity?

The Sumerians believed that the reproduction of cattle and the renewal of edible plants and fruit could be secured only by a ceremony, on New Year’s Day, in which the king, playing the role of Dumuzi [a false god],  consummated a marital union with Inanna [a false goddess], represented by one of her priestesses.

Were the human rulers participating in this ceremony possessed by the goat-demon during it? Were the sons of the rulers, that is, the royal children borne by this annual union, also known as the sons of the gods? Yes, I believe so.

The origin of the goat demon in antiquity