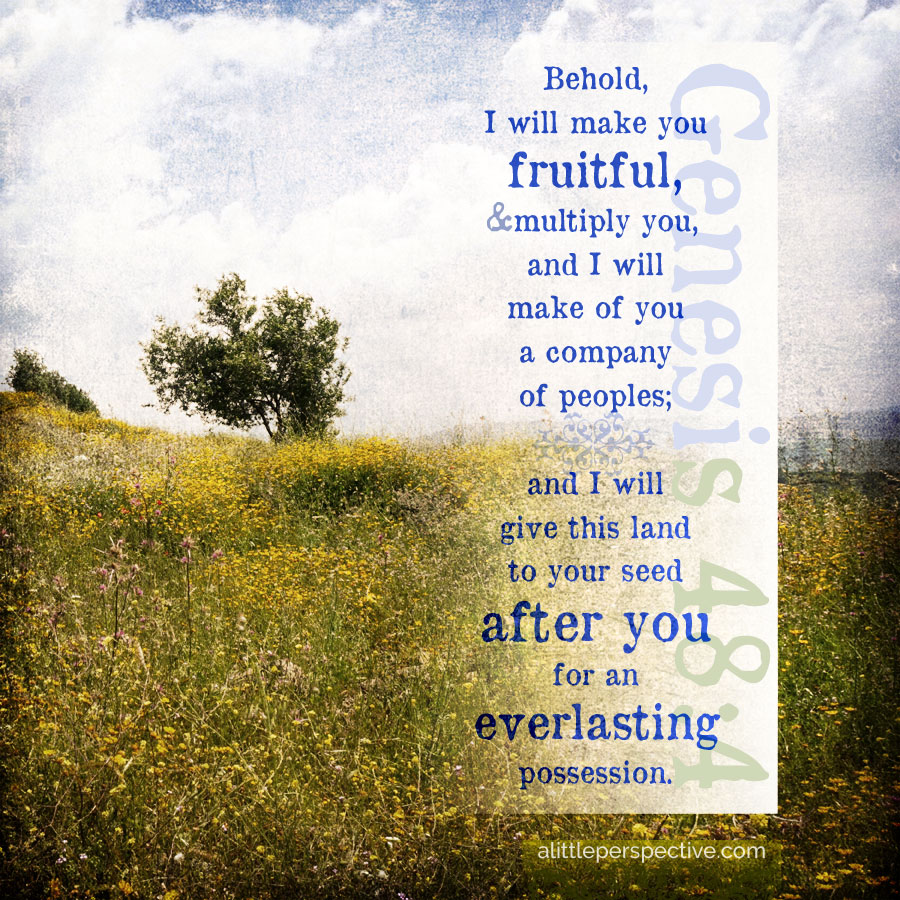 Read Genesis 47:28-48:22 at Bible Gateway.
the teaching tools of scripture

1a.1) Gen 47:28-31 {p} And Jacob lived in the land of Egypt seventeen years; so the days of Jacob, the years of his life, were a hundred forty and seven years. And the time drew near that Israel must die; and he called his son Joseph, and said to him: “If now I have found favor in your sight, put, I pray you, your hand under my thigh, and deal kindly and truly with me; bury me not, I pray you, in Egypt. But when I sleep with my fathers, you shall carry me out of Egypt, and bury me in their burying-place.” And he said: “I will do as you have said.” And he said: “Swear to me.” And he swore to him. And Israel bowed down upon the bed’s head;

1a) Gen 48:1-2 And it came to pass after these things, that one said to Joseph: “Behold, your father is sick.” And he took with him his two sons, Manasseh and Ephraim. 2 And one told Jacob, and said: “Behold, your son Joseph comes to you.” And Israel strengthened himself, and sat upon the bed;
1b) Gen 48:3-4 And Jacob said to Joseph: “God Almighty appeared unto me at Luz in the land of Canaan, and blessed me, 4 and said to me: Behold, I will make you fruitful, and multiply you, and I will make of you a company of peoples; and will give this land to your seed after you for an everlasting possession;
1c) Gen 48:5a And now your two sons, who were born to you in the land of Egypt before I came to you into Egypt;
1d) Gen 48:5b Are mine;
central axis) Gen 48:5c Ephraim and Manasseh, even as Reuben and Simeon;
2d) Gen 48:5d Shall be mine;
2c) Gen 48:6a And your offspring, that you beget after them, shall be yours;
2b) Gen 48:6b They shall be called after the name of their brethren in their inheritance;
2a) Gen 48:7 And as for me, when I came from Paddan, Rachel died to me in the land of Canaan in the way, when there was still some way to go to Ephrath; and I buried her there in the way to Ephrath — the same is Bethlehem;”

1b) Gen 48:8-12 The two sons of Joseph brought near to Israel that he might bless them;

central axis) Gen 48:15-16 And he blessed Joseph, and said: “The God before whom my fathers Abraham and Isaac did walk, the God who has been my shepherd all my life long to this day, 16 the angel who has redeemed me from all evil, bless the lads; and let my name be named in them, and the name of my fathers Abraham and Isaac; and let them grow into a multitude in the midst of the earth;”

2c) Gen 48:17-18 And when Joseph saw that his father was laying his right hand on the head of Ephraim, it displeased him, and he held up his father’s hand, to remove it from Ephraim’s head to Manasseh’s head. 18 And Joseph said to his father: “Not so, my father, for this is the first-born; put your right hand on his head;”

1a) Gen 48:19 And his father refused, and said: “I know it, my son, I know it; he also shall become a people, and he also shall be great; however his younger brother shall be greater than he, and his seed shall become a multitude of nations;”
central axis) Gen 48:20a And he blessed them that day, saying: “By you shall Israel bless, saying: God make you as Ephraim and as Manasseh;”
2a) Gen 48:20b And he set Ephraim before Manasseh;

2a.2) Gen 48:22 {p} Moreover I have given to you one portion above your brethren, which I took out of the hand of the Amorite with my sword and with my bow.”

Because Vayechi, both annual and triennial, famously does not begin with a new paragraph but a continuation of the paragraph from the previous Torah portion, we speculated that the two Torah portions were tied together.

1b) Gen 47:27 Israel dwelt in the land of Egypt + acquired possessions in it/ were fruitful + multiplied;

central axis) Gen 47:30-31 {p} Jacob secures Joseph’s oath that he will carry him out of Egypt + bury him with his fathers at Machpelah;

The emphasis shifts to Joseph’s promise to his father that he will carry him up from Egypt. The promise is fulfilled in Joseph’s lifetime when he takes his father to Machpelah for the burial; but also it also speaks prophetically of Messiah carrying Israel up out of the kingdom of darkness into the Promised Land. So there was is a quadruple fulfillment of the promise, the first in Joseph’s lifetime; the second when God sent Moses, another Messianic type, to bring Israel up from Egypt, a third which is yet ongoing, a spiritual fulfillment in Messiah Yeshua bringing us up from slavery in the kingdom of darkness into His own kingdom, and a fourth also ongoing, in the regathering of the children of Israel to their land from the kingdoms of this world.

The structure tells us that Ephraim will not be excluded from the fourth and final fulfillment, but will also receive a full inheritance with his brothers!