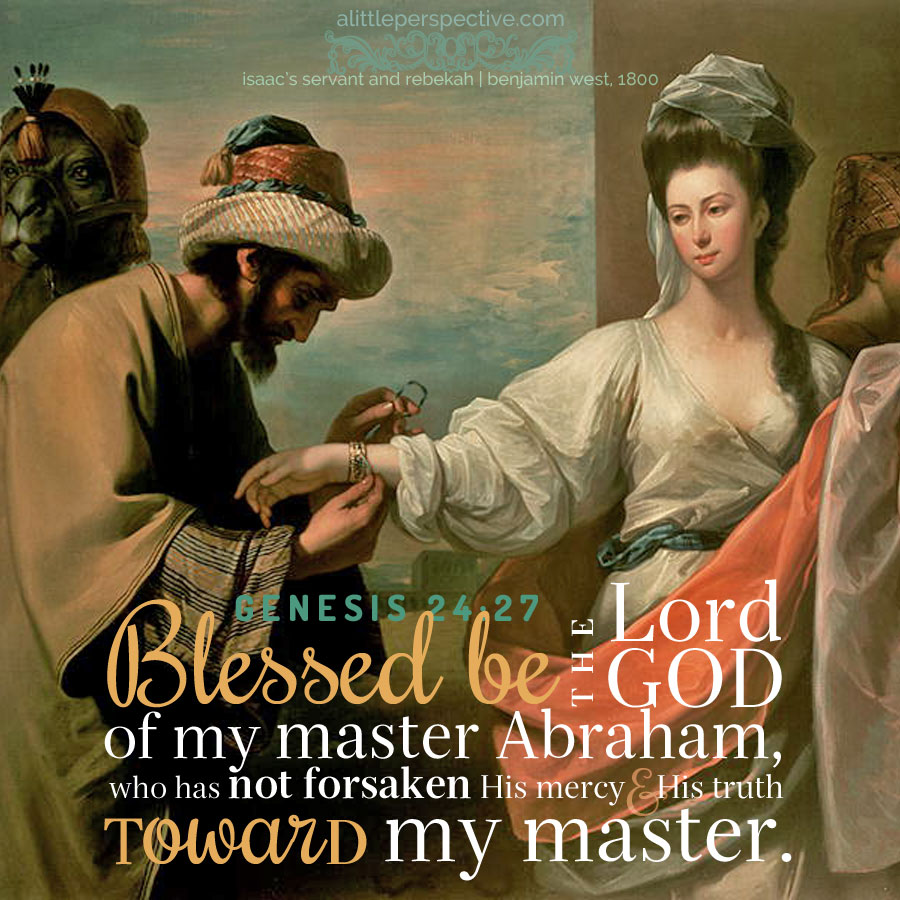 1a.1) Gen 24:1, Now Abraham was old, well advanced in age; and the Lord had blessed Abraham in all things;

1a) Gen 24:2-3a, So Abraham said to the oldest servant of his house, who ruled over all that he had, “Please, put your hand under my thigh, and I will make you swear by the Lord, the God of heaven and the God of the earth;

1b.2) Gen 24:5-6, And the servant said to him, “Perhaps the woman will not be willing to follow me to this land. Must I take your son back to the land from which you came?” But Abraham said to him, “Beware that you do not take my son back there;

central axis) Gen 24:7a, “The Lord God of heaven, who took me from my father’s house and from the land of my family, and who spoke to me and swore to me, saying, ‘To your descendants I give this land,’ He will send His angel before you;”

2b.2) Gen 24:8, “And if the woman is not willing to follow you, then you will be released from this oath; only do not take my son back there;”

2a) Gen 24:9, So the servant put his hand under the thigh of Abraham his master, and swore to him concerning this matter;

1b) Gen 24:10, The servant took ten of his master’s camels and departed, for all his master’s goods were in his hand. And he arose and went to Mesopotamia, to the city of Nahor;

1a) Gen 24:11, He made his camels kneel down outside the city by a well of water at evening time, the time when women go out to draw water;

central axis) Gen 24:13-14a, “Behold, here I stand by the well of water, and the daughters of the men of the city are coming out to draw water. Now let it be that the young woman to whom I say, ‘Please let down your pitcher that I may drink,’ and she says, ‘Drink, and I will also give your camels a drink’—let her be the one You have appointed for Your servant Isaac;

2a) Gen 24:15-16, It happened, before he had finished speaking, that behold, Rebekah, who was born to Bethuel, son of Milcah, the wife of Nahor, Abraham’s brother, came out with her pitcher on her shoulder. Now the young woman was very beautiful to behold, a virgin; no man had known her. And she went down to the well, filled her pitcher, and came up;

And the servant ran to meet her and said, “Please let me drink a little water from your pitcher.” So she said, “Drink, my lord.” Then she quickly let her pitcher down to her hand, and gave him a drink. And when she had finished giving him a drink, she said, “I will draw water for your camels also, until they have finished drinking.” Then she quickly emptied her pitcher into the trough, ran back to the well to draw water, and drew for all his camels. And the man, wondering at her, remained silent so as to know whether the Lord had made his journey prosperous or not. So it was, when the camels had finished drinking;

1a) Gen 24:22b, That the man took a golden nose ring weighing half a shekel, and two bracelets for her wrists weighing ten shekels of gold;

1b) Gen 24:23-25, and said, “Whose daughter are you? Tell me, please, is there room in your father’s house for us to lodge?” So she said to him, “I am the daughter of Bethuel, Milcah’s son, whom she bore to Nahor.” Moreover she said to him, “We have both straw and feed enough, and room to lodge;”

central axis) Gen 24:26-27, Then the man bowed down his head and worshiped the Lord. And he said, “Blessed be the Lord God of my master Abraham, who has not forsaken His mercy and His truth toward my master. As for me, being on the way, the Lord led me to the house of my master’s brethren;”

2b) Gen 24:28-29, So the young woman ran and told her mother’s household these things. Now Rebekah had a brother whose name was Laban, and Laban ran out to the man by the well;

2c) Gen 24:32b-33a, And he unloaded the camels, and provided straw and feed for the camels, and water to wash his feet and the feet of the men who were with him. Food was set before him to eat;

central axis) Gen 24:40a, But he said to me, ‘The Lord, before whom I walk, will send His angel with you and prosper your way;

2b.2) Gen 24:41a, You will be clear from this oath when you arrive among my family; for if they will not give her to you;

The Lord God has not forsaken His mercy or His truth to Abraham.

We have already seen that Isaac, as the son of the promise, is an Old Testament type for Messiah, the Promised Seed. In Gen 24, Abraham (the Father) sends his servant (a.k.a. the Holy Spirit) to search for the bride (the Church) of Isaac (the Promised Seed, the Son). This event occurs AFTER the “death and resurrection” of the Promised Seed in Gen 22. In the end, the Holy Spirit, I mean, the servant, brings the Bride to the Son, as the Son goes out to meet them.

Additional readings for this parashah:

The Camels and the Well (Brad Scott)
Eliezer and Ruach HaKodesh (Hebrew 4 Christians)
The Wealth and Power of Biblical Patriarchs (Assoc. for Biblical Research)