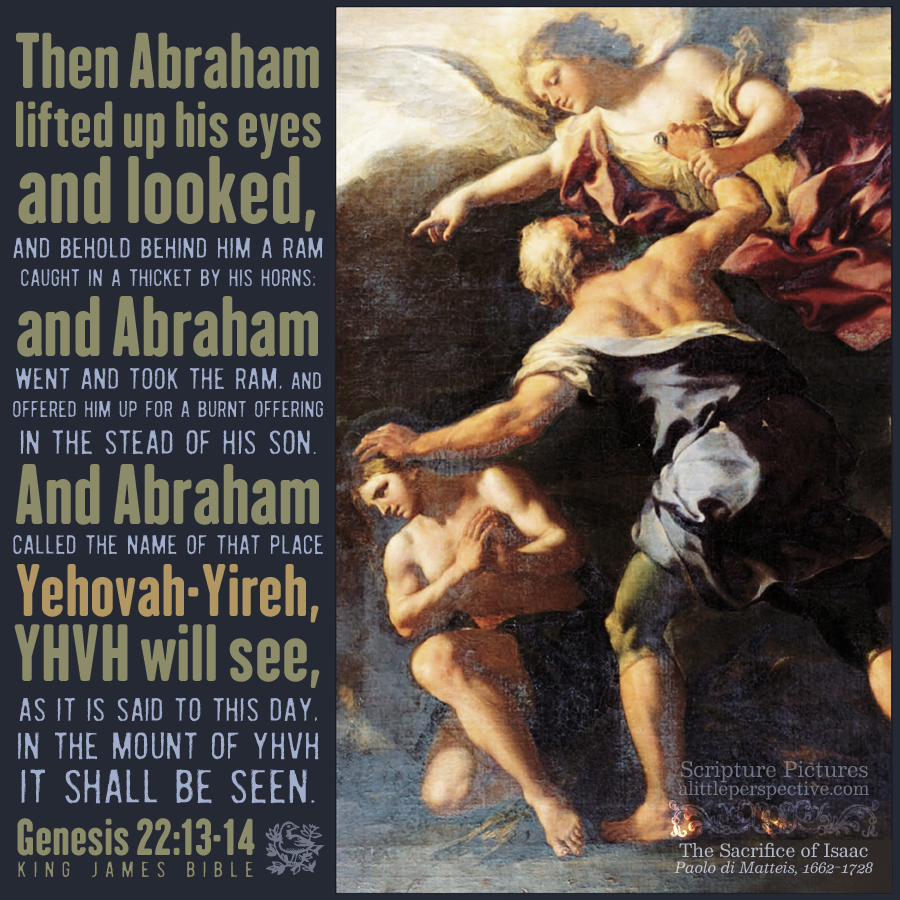 Read Genesis 21 and 22 at Bible Gateway.

Each of these paragraphs form their own chiastic structures, but the most puzzling one is Abraham and the binding of Isaac. Why would God ask this terrible sacrifice of Abraham? The answer is amazing!

1a) Gen 22:3, Abraham saddled his donkey, took two of his young men and Isaac his son and went;
central axis) Gen 22:4, Then on the third day Abraham lifted his eyes and saw the place afar off;
2a) Gen 22:5, Abraham said to his young men, “Stay here with the donkey; the lad and I will go and come back to you;”

2) Gen 22:6, Abraham took the wood of the burnt offering and laid it on Isaac his son;

central axis) Gen 22:7-8, God will provide for Himself the lamb for a burnt offering;

But this paragraph is full of signs which proclaim the Messiah by prophetic type — for Moses, Jesus told us, wrote about Him (Joh 5:46). So as God is the Father who would give His only begotten Son, who was the Promised Seed (Gen 3:15), for the sins of the world by sacrifice, He asked Abraham, the father, to do likewise with his son, who was also the promised seed (Gen 15:2-4):

God calls Isaac Abraham’s only son, more than once, (vs. 2 and 12), even though Isaac was not Abraham’s only son; Ishmael was also Abraham’s son. God was not being inaccurate, but prophesying of Messiah as His only Son with Isaac as the prophetic type (Joh 1:14-18).

Abraham fully expected Isaac to be raised from the dead after the sacrifice, as he told the young men they would both return (vs. 5). And in a manner of speaking, Isaac was raised from the dead – his death was certain, but he received his life through miraculous intervention (vs. 12). This is the messianic sign of resurrection and life in Torah, for Jesus is the resurrection and the life (Joh 11:25).

The wood for the sacrifice was laid upon Isaac to bear to the place of sacrifice (vs. 6, Joh 19:17).

Isaac, as a young man of 25 years, could have resisted Abraham, as an old man of 125 years, if he so chose, when his father bound him to the altar. But he submitted himself willingly to the will of his father (vs. 9, Mat 26:39).

And although this sign of Messiah is not specifically in this chapter, it was not physically or naturally possible for Isaac’s mother to bear a son, as she had already passed through menopause (Gen 18:10-11) and yet she received the son of the promise by the miraculous intervention of the Holy Spirit, just as Mary the mother of Jesus also did (Luk 1:26-38).

The history of Job takes place during the age of the patriarchs, so we will begin Job tomorrow and then return to Isaac.