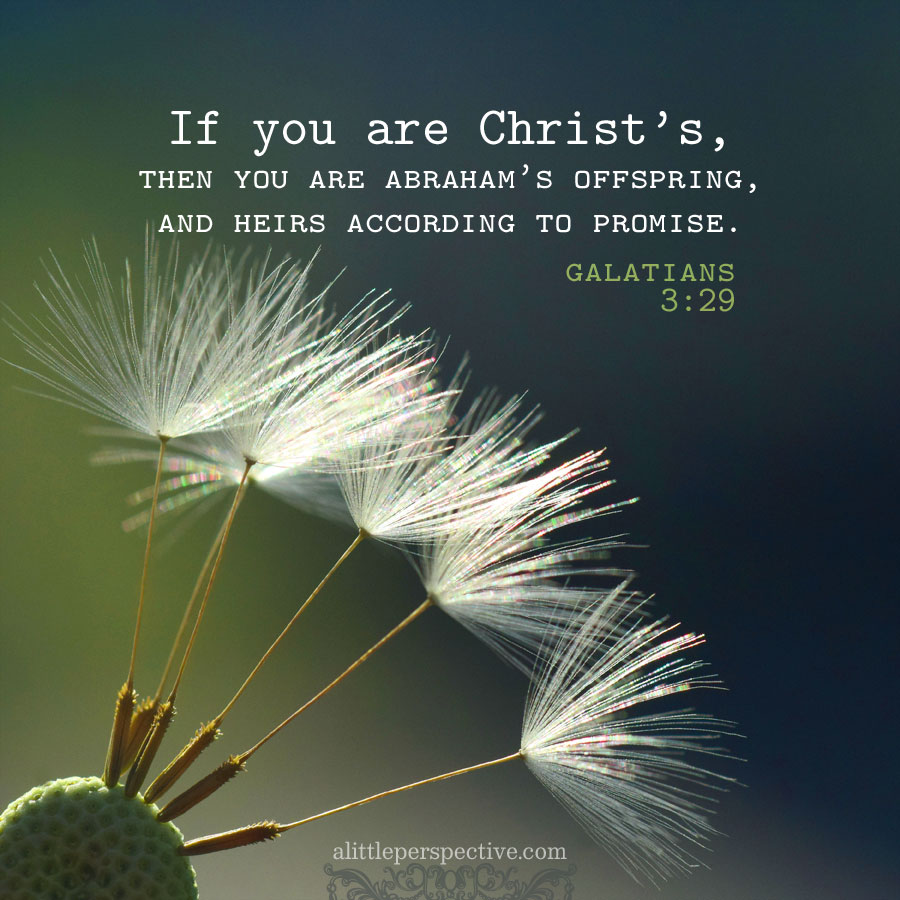 Brethren, I speak in the manner of men: Though  it is only a man’s covenant, yet if it is  confirmed, no one annuls or adds to it. Now to Abraham and his Seed were the promises made. He does not say, “And to seeds,” as of many, but as of one, “And to your Seed,” who is Christ. And this I say, that the law, which was four hundred and thirty years later, cannot annul the covenant that was confirmed before by God in Christ, that it should make the promise of no effect. For if the inheritance is of the law, it is no longer of promise; but God gave it to Abraham by promise. Gal 3:15-18

He is saying that the heirs of Abraham and of Abraham’s promise are in Christ, the Promised Seed, not in the Law. So then Paul asks a great question: why then did God give the Law if it had nothing to do with the promise and covenant made with Abraham, which was fulfilled in Christ through faith?

What purpose then does the law serve? It was added because of transgressions, till the Seed should come to whom the promise was made; and it was appointed through angels by the hand of a mediator. Now a mediator does not mediate for one only, but God is one. Is the law then against the promises of God? Certainly not! For if there had been a law given which could have given life, truly righteousness would have been by the law. But the Scripture has confined all under sin, that the promise by faith in Jesus Christ might be given to those who believe. But before faith came, we were kept under guard by the law, kept for the faith which would afterward be revealed. Therefore the law was our tutor to bring us to Christ, that we might be justified by faith. But after faith has come, we are no longer under a tutor. Gal 3:19-25

Paul is teaching us that the Law guarded us until Messiah came. For God promised a Seed to the woman who would redeem us from sin (Gal 3:15), but then mankind was wiped out in the judgment of Noah’s Flood because their sin became too great. If mankind is wiped out, how is the Seed of the woman going to be born?

So the Law was added to restrain transgressions, to restrain evil consequences, until Messiah could be born. Now before faith came, the Law kept us under guard. It preserved us, it protected us. Only those people who have physical life, after all, and who are not dead, can be around to receive spiritual life when they hear about the gospel of Jesus Christ. What does it mean that the Law was our tutor to bring us to Christ?

Let’s suppose a person finds out about the Law and decides to start obeying it. After a (usually short) time, he realizes that he keeps blowing it. So he tries harder, and maybe improves somewhat. But does he ever succeed 100%? No. Because of the Law, this man now knows something that he didn’t know before: he needs saving! He now knows that he cannot make it on his own effort. If he then hears the gospel of Christ, he can respond to it wholeheartedly with repentance, since he knows because of his attempts to obey the Law, he is lost. That is what I believe Paul means when he says that the Law is our tutor – it teaches us that the Law itself is not enough, that we need Christ if we are to be saved.

What does he mean when he says that after faith comes, we are no longer under a tutor? Does this mean we no longer need to obey the Law once we have received Christ by faith? I think it means, once we have received Christ by faith, we no longer need the Law teaching us that we cannot be made righteous through our own effort. We have been made righteous in Christ. We no longer need to keep learning the lesson that justification cannot be by the Law. Remember, the topic of this letter is what saves or justifies a man. The question Paul is addressing is about justification, and not about obedience.

Paul concludes Gal 3 by reiterating that it is through faith in Christ that we find the fulfillment of the promises, not in the obedience to the Law. His topic is justification, and justification is fulfilled in Christ.

Continued: galatians 4:1-7, guardian of the law