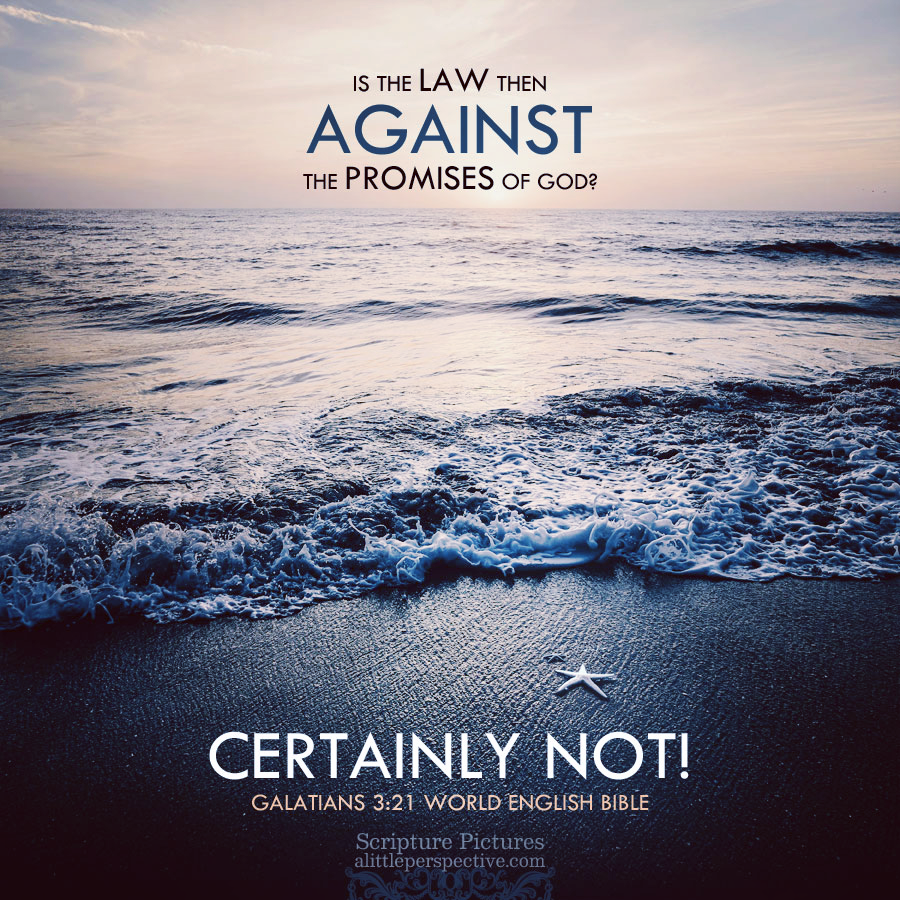 The chapter breaks and headings that appear in our Bibles, were not there in Paul’s original letter. For Paul, he is writing a single letter on a single topic: what is it that justifies a man so that they receive salvation. But the chapter divisions and such make it seem as if new topics are being introduced. So when we go on to read today’s reading, we have to remind ourselves that the topic is what saves a man:

1a) Gal 3:6-9, Abraham “believed God, and it was accounted to him for righteousness” /blessing of justification by faith;
1b) Gal 3:10a, Those who seek justification by works of the Law are under the curse;
1c) Gal 3:10b, For he shall continue in all the Law, to do them;
central axis) Gal 3:11-12a, No one is justified by the Law/ “the just shall live by faith”/ the Law is not of faith;
2c) Gal 3:12b, But “The man who does them shall live by them.”
2b) Gal 3:13, Christ redeemed us from the curse of the Law by becoming a curse for us;
2a) Gal 3:14, Blessing of Abraham upon the Gentiles in Christ/ the promise of the Spirit through faith.

Paul is not saying that faith is opposed to the Law (torah). He just finished saying that Abraham is the father of those who are of faith, and of Abraham God said that he obeyed His voice, and kept His charge, His commandments, His statutes, and His law (torah, Gen 26:5).

But what Paul is saying, is that the flesh is opposed to the Spirit (Jer 31:31-33, Eze 36:25-27). He is saying that since the new covenant, obedience to the Law is a work of the Spirit. Men who have been baptized in the Spirit, are now compelled from the inside, by their own reborn  new nature, and by love of the Lord God, to obey Him (Joh 14:15). But to do something which you were not convicted to do, just because some Jews came and told you that if you didn’t, you could have no salvation in Jesus, that is a work of the flesh.

So what is the curse of the Law that Paul is talking about? Is it, as we have been taught, that if we obey the Law we are under a curse?

The curse of the Law is not brought upon us by obedience to the Law. But the curse of the Law is brought upon us by disobedience to the Law (Deu 28:15; Rom 2:12-13), which condemns us as sinners in God’s sight. Jesus has redeemed us from the indictment of the Law, which decreed us a transgressor of the Law (Col 2:13-14) and therefore worthy of death, the wage for sin (Rom 6:23). This He did by becoming a curse for us! He has taken the sin, which is charged to our account because we broke the Law, upon Himself. Our sin was imputed to Him, and His righteousness was imputed to us (2 Cor 5:21). We receive the gift of righteousness through faith, not by obedience to the Law (Rom 3:19-24). For, as Paul points out, if we receive righteousness because of our work, then it is our wage (Rom 4:4-5), and not a free gift.

So Paul is saying that we have been into the courtroom of the Heavenly Judge, the blood of the Lamb was found brushed over our guilty verdict, and therefore we have been redeemed from the indictment — the curse — of the Law which required death as a consequence for sin. Yes, Christ redeemed us from the curse of the Law! But it is not obedience to the Law which is the curse, but our having to be justified by our obedience to the Law that is the curse!

He is saying that the heirs of Abraham and of Abraham’s promise are in Christ, the Promised Seed, not in the Law. So then Paul asks a great question: why then did God give the Law if it had nothing to do with the promise and covenant made with Abraham, which was fulfilled in Christ through faith?

So the Law was added to restrain transgressions, to restrain evil consequences, until Messiah could be born. Now before faith came, the Law kept us under guard. It preserved us, it protected us. Only those people who have physical life, after all, and who are not dead, can be around to receive spiritual life when they hear about the gospel of Jesus Christ.

1a) Gal 3:23-25, Before faith, we were kept under guard by the Law, being our tutor to bring us to Christ;
1b) Gal 3:26, For you are all sons of God through faith in Christ Jesus;
1c) Gal 3:27, For as many of you as were baptized into Christ have put on Christ;
central axis) Gal 3:28a, There is neither Jew nor Greek, there is neither slave nor free, there is neither male nor female;
2c) Gal 3:28b, For you are all one in Christ Jesus;
2b) Gal 3:29, And if you are Christ’s, then you are Abraham’s seed, and heirs according to the promise;
2a) Gal 4:1-2, As long as the heir is a child, he is under guardians and stewards until the time appointed by the father.

What does it mean, then, that the Law was our tutor to bring us to Christ? Every man who starts obeying the Law, learns that he must repent for transgressions of the Law. It is the Law that teaches us our shortcomings, that we have transgressed the Law. Because of the Law, this man now knows something that he didn’t know before: he needs saving! Now he can respond wholeheartedly to the gospel of grace with repentance, when he hears it, since he knows because of his attempts to obey the Law, he is lost.

What does he mean when he says that after faith comes, we are no longer under a tutor? Does this mean we no longer need to obey the Law once we have received Christ by faith? We know it cannot not mean that because that contradicts Scripture clearly expounded elsewhere.  I think it means, we no longer need to keep learning the lesson that justification cannot be by the Law. Remember, the topic of this letter is what saves or justifies a man. The question Paul is addressing is about justification, and not about obedience.