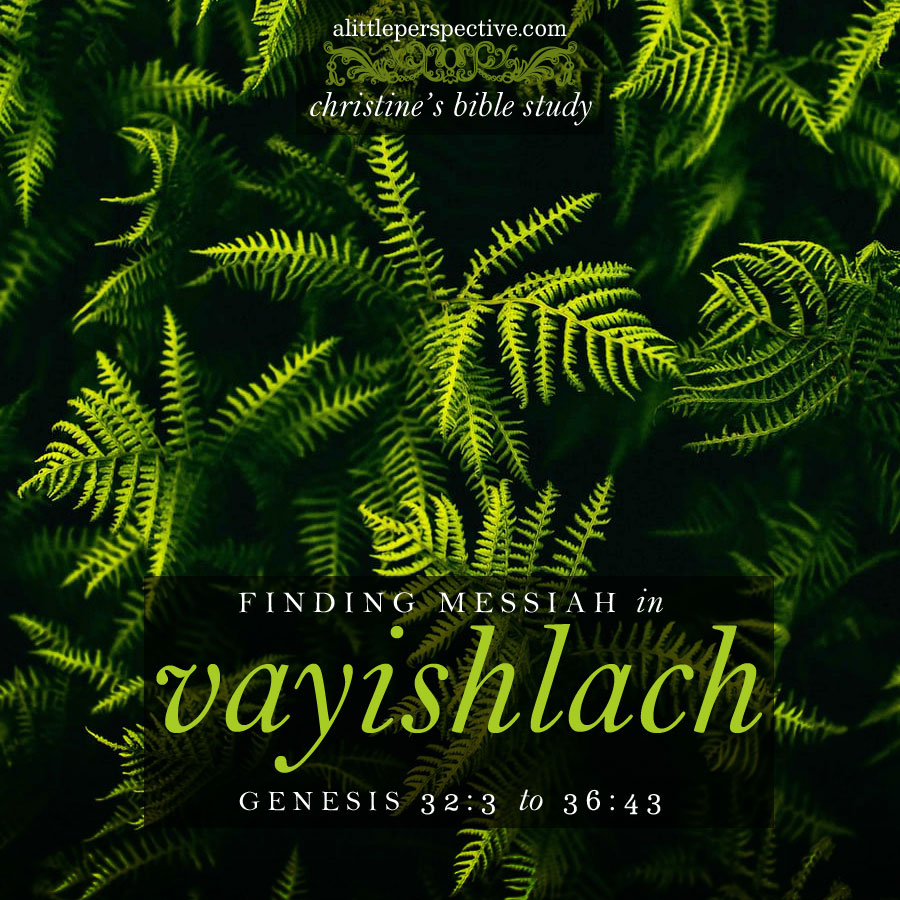 This section resolves into a chiastic structure with a Messianic prophecy. Look at the matched Scriptures of the C pair. 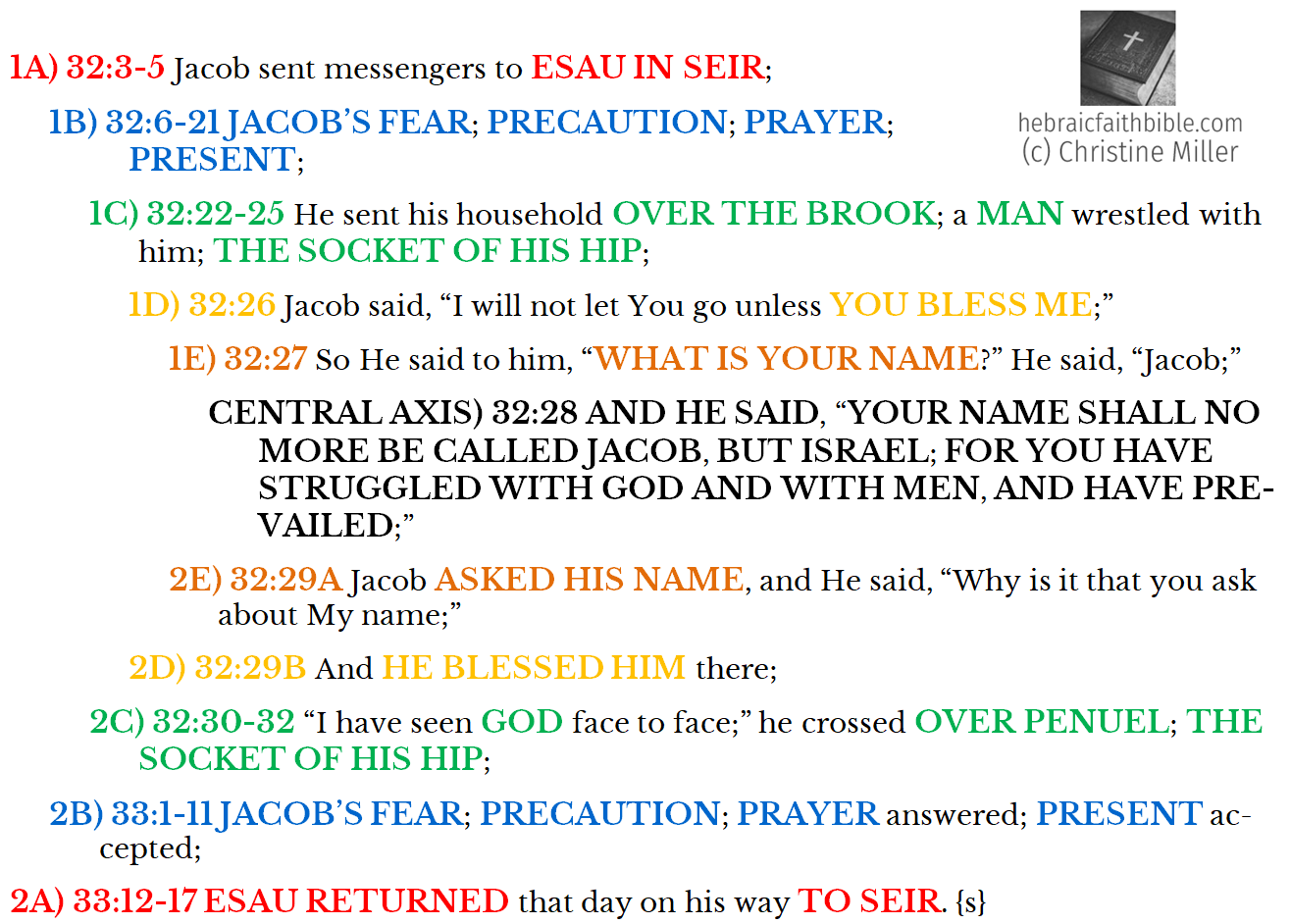 And Jacob was left alone; and there wrestled a MAN with him until the breaking of the day. Gen 32:24

And Jacob called the name of the place Peniel, “For I have seen GOD face to face, and my life is preserved.” Gen 32:30

Then Jacob came safely to the city of Shechem, which is in the land of Canaan, when he came from Padan Aram; and he pitched his tent before the city. Gen 33:18 NKJV

And Jacob came to Shalem, a city of Shechem, which is in the land of Canaan, when he came from Padan-aram; and pitched his tent before the city. Gen 33:18 KJV

The KJV translators had such respect for the Word of God, that they did not change a single jot or tittle. The modern translators feel compelled to improve the text, although the NKJV is the least tampered with. But in this case they do not match at all.

Shalem is Salem. It is Strong’s H8004, and its definition is, “the place where Melchizedek was king.” Melchizedek was, we learned earlier, the King of Peace, and the King of Righteousness—a pre-incarnate appearance of Messiah Yeshua. The Scripture is telling us, that Jacob came to the place where Melchizedek was king; that is, to the place where the King of Peace and the King of Righteousness, Messiah Yeshua, reigned. Jacob built the altar, El Elohe Israel —God, the God of Israel—there. But at some time after that, he allowed himself and his household to become defiled. But this is the Gospel: defilement is not the end of our story. If we repent and return to God, He will restore us to His house, literally, “Bethel,” the house of God.

And God said unto him, “I am God Almighty: be fruitful and multiply; a nation and a company of nations shall proceed of you, and kings shall come out of your body.”Gen 35:11

Jacob spoke this word, that God gave to him here, again at the blessing of Joseph’s sons:

Why do I say this? Here we go on a highly relevant bunny trail.

The house of Judah became the Jews. The people of the kingdom of Judah, primarily from the two tribes of Judah and Benjamin, were taken captive to Babylon.

And those that had escaped from the sword, [Nebuchadnezzar] carried away to Babylon; where they were servants to him and his sons until the reign of the kingdom of Persia, to fulfil the word of YHVH by the mouth of Jeremiah, until the land had enjoyed her Sabbaths. For as long as she lay desolate she kept sabbath, to fulfil seventy years. 2 Chr 36:20-21

They were known as Jews (of Judah) upon their return to the land. The Jews are not all there is to Israel. It is a common mistake to think that the patriarchs and the blessings and the covenants and the commandments and the feast days of YHVH apply only to Jews. Sometimes they are even called “Jewish laws,” or “Jewish feasts.” The truth is, all those things were given to the twelve tribes of Israel, and God’s teaching in His ways and in righteousness (torah) applies to all who call upon His name.

But the mercy of YHVH is from everlasting to everlasting on those who fear Him, and His righteousness to children’s children, to such as keep His covenant, and to those who remember His commandments, to do them. Psa 103:17-18

Not every Jew is a physical descendant of Abraham, or of Judah or Benjamin. Many times “foreigners” (i.e. Gentiles) joined themselves to the Jews to serve the God of Israel. Ruth is only one example. Of course, the descendants of these converts were considered full Jews. In fact it is a crime in Judaism to consider converts as second-class because they are not native-born.

The house of Ephraim, the ten tribes of the kingdom of Israel, were taken captive by the Assyrians and never returned.

For the children of Israel walked in all the sins of Jeroboam which he did; they departed not from them; until YHVH re-moved Israel out of His sight, as He had said by all His servants the prophets. So was Israel carried away out of their own land to Assyria unto this day. 2 Kin 17:22-23

They were scattered among every Gentile nation—the seventy nations who had rejected God at Babel—like seed, or like leaven, until they leavened the whole lump.

“For, lo, I will command, and I will sift the house of Israel among all nations, like as grain is sifted in a sieve, yet shall not the least grain fall upon the earth.” Amo 9:9

Thus they became indistinguishable from Gentiles over the course of the last 2700 years. That means that there are “Gentiles” walking on this planet who are really descendants of Ephraim, and to them too belong the patriarchs and the promises and the covenants and the commandments and the feast days of YHVH. To them too belongs the Torah.

Not every Gentile is a physical descendant of Abraham through Ephraim. Physical descent from Abraham does not make someone of Judah or of Ephraim—of Israel or of Abraham—as Yeshua and Paul attest.

“And I say unto you, that many shall come from the east and west, and shall sit down with Abraham, and Isaac, and Jacob, in the kingdom of heaven. But the children of the kingdom shall be cast out into outer darkness; there shall be weeping and gnashing of teeth.” Yeshua, Mat 8:11-12

In fact, it seems that the Father planned it so that physical descent in our day cannot be known. The Temple records, which included the genealogies, were destroyed in 70 AD when the Temple was destroyed, and our day is far enough removed from then, and so many migrations, invasions, and the like have taken place in the intervening years, that it is impossible to know.

It is primarily Gentiles who have become Christians in the last 2000 years. Does this mean that every Christian is an Ephraimite, i.e., is physically descended from Abraham through Ephraim? Some are and some aren’t. Enough time has passed that the only one who can know today for sure is the Father.

But no matter. It is not only physical descent that makes someone of Judah or of Ephraim. God in many places says that there is to be one Law for the native-born and the sojourner—i.e. “Gentile”—alike.

One Law shall be to him that is native-born, and unto the stranger who sojourns among you. Exo 12:49

Besides, those who came to the God of Israel through Messiah Yeshua have been grafted in to Israel, no matter their origin. God is making one olive tree.

Some of the branches being broken off, and you, being a wild olive tree, were grafted in among them, and with them partake of the root and fatness of the olive tree.  Rom 11:17

God is waking up His two houses in these last days. The Ephraimites, who became scattered among the Gentiles, who became the Christians, are waking up to their Hebrew roots, to their Israelite status. They are learning His ways as is commanded in Torah. Grace is not taken away from them, but obedience to the Word and commandments of God is being added to them, and Christians doing whatever they feel like and ignoring what the Word of God says because they are saved by grace, is going by the wayside. Those who love Yeshua will keep His commandments.

As well, the Jews are waking up to their Hebrew Messiah, Yeshua our Lord. Obedience to Torah is not taken away from them, but grace and finding forgiveness of sins and everlasting life through faith by the blood of Yeshua is being added to them, and working one’s way into God’s favor by keeping commandments is going by the wayside. The fact is, no man can ever, by works of the Law, become justified in God’s sight.

Therefore by the deeds of the Law there shall no flesh be justified in His sight, for by the Law is the knowledge of sin. Rom 3:20

Those who love the Father will love the Son also.

“If God were your Father, you would love Me, for I proceeded forth and came from God; neither came I of Myself, but He sent Me.” Yeshua, Joh 8:42

The king who will come forth from Israel’s body, of the line of David, will unite the two houses into one house with one king.

Say unto them, “Thus says the Lord YHVH; ‘Behold, I will take the stick of Joseph, which is in the hand of Ephraim, and the tribes of Israel his fellows, and will put them with him, even with the stick of Judah, and make them one stick, and they shall be one in My hand. And the sticks whereon you write shall be in your hand before their eyes. And say unto them, “Thus says the Lord YHVH; ‘Behold, I will take the children of Israel from among the nations, whither they are gone, and will gather them on every side, and bring them into their own land, and I will make them one nation in the land upon the mountains of Israel; and one king shall be king to them all. And they shall be no more two nations, neither shall they be divided into two kingdoms any more at all, neither shall they defile themselves any more with their idols, nor with their detestable things, nor with any of their transgressions, but I will save them out of all their dwelling places, wherein they have sinned, and will cleanse them; so shall they be My people, and I will be their God. And David My servant shall be king over them; and they all shall have one shepherd; they shall also walk in My judgments, and observe My statutes, and do them.” Eze 37:19-24

That king is Yeshua, the Son of David. There will be one faith, one people, and one assembly of believers, just as there is one God and one Name by which men can be saved.

There is one body, and one Spirit, even as you are called in one hope of your calling; one Lord, one faith, one baptism, one God and Father of all, who is above all, and through all, and in you all. Eph 4:4-6

[Yeshua of Nazareth:] Neither is there salvation in any other, for there is no other name under heaven given among men, whereby we must be saved. Act 4:12

Well, the two houses are waking up. Can the return of Yeshua be far behind?

GENESIS 32:3-36:43 ANNUAL VAYISHLACH “AND HE SENT” OUTLINE | GENESIS INDEX of STUDIES
FINDING MESSIAH in TORAH: A MESSIANIC DISCOVERY THROUGH the TORAH PORTIONS
THE LAW of LOVE: THE GOSPEL of GRACE REVEALED in the COMMANDMENTS of GOD