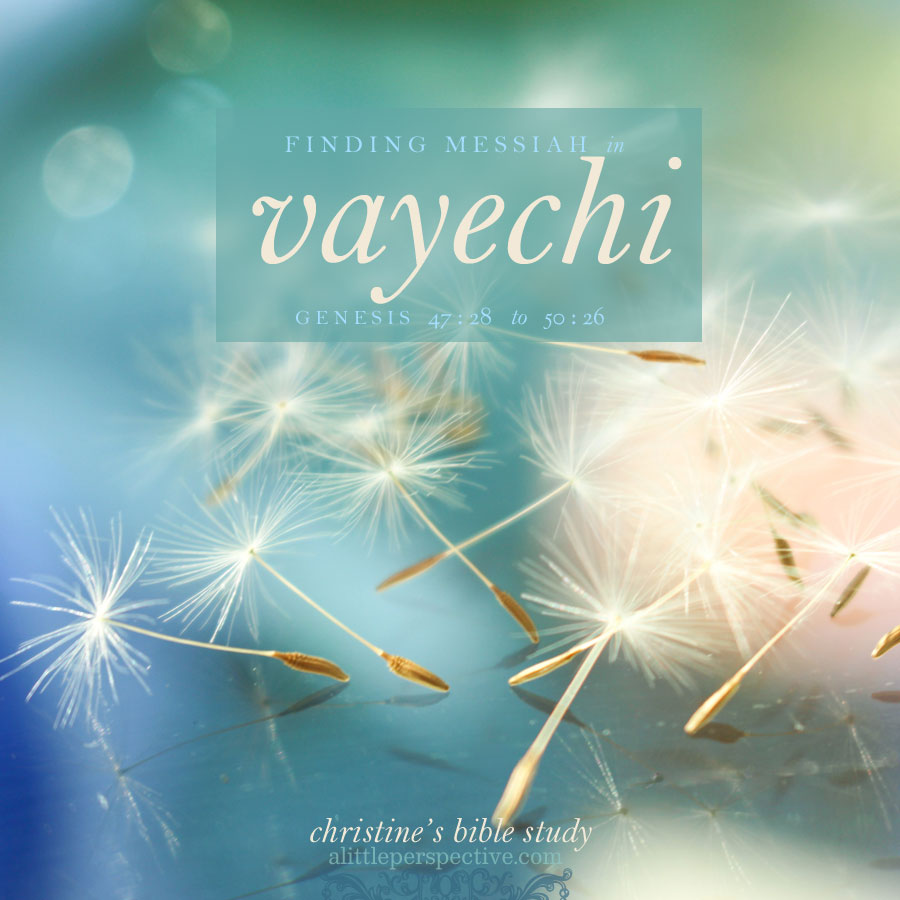 And the time drew near that Israel must die, and he called his son Joseph, and said unto him, “If now I have found grace in your sight, put, I pray you, your hand under my thigh, and deal kindly and truly with me. Bury me not, I pray you, in Egypt, but I will lie with my fathers, and you shall carry me out of Egypt, and bury me in their burying place.” And he said, “I will do as you have said.” And he said, “Swear unto me.” And he swore unto him. And Israel bowed himself upon the bed’s head. Gen 47:29-31

Joseph gives his promise to his father that he will carry him up from Egypt. The promise is fulfilled in Joseph’s lifetime when he takes his father to Machpelah for the burial; but also it speaks prophetically of Messiah carrying Israel up out of the kingdom of darkness into the Promised Land. So there was and is a quadruple fulfillment of the promise, the first in Joseph’s lifetime; the second when God sent Moses, another Messianic type, to bring Israel up from Egypt, a third which is yet ongoing, a spiritual fulfillment in Messiah bringing us up from slavery in the kingdom of darkness into His own kingdom, and a fourth also ongoing, in the regathering of the children of Israel to their land from the kingdoms of this world.

The scepter shall not depart from Judah, nor a lawgiver from between his feet, until Shiloh come; and unto Him shall be the gathering of the people. Gen 49:10

Judah’s blessing contains an overt Messianic prophecy. The discussion on the meaning of Shiloh and its Messianic significance from Gesenius’ Hebrew Lexicon is enlightening. The root word from which Shiloh is derived, is the verb “to be at rest,” the same root that gives us shalom. Therefore this word can indicate the abstract concept of tranquility.

“The sceptre shall not depart from Judah until tranquility shall come, and the peoples shall obey him,” meaning Judah; i.e., Judah shall not lay down the sceptre of the ruler, until his enemies be subdued, and he shall rule over many people; an expectation belonging to the kingdom of the Messiah, who was to spring from the tribe of Judah. Others take the meaning of Shiloh as the concrete noun, and render it, the peaceable one, the peacemaker; either understanding the Messiah Himself (Isa 9:1-7) or Solomon (1 Chr 22:9). The ancient versions take Shiloh in this sense, “until he shall come to whom the sceptre, the dominion, belongs;” i.e. Messiah.

“Shiloh” is derived from שלה shalah, Strong’s H7951, a verbal root meaning, “to be tranquil.” The pictographs, according to the Ancient Hebrew Lexicon, are shin + lamed + hey. Although the Lexicon doesn’t expressly state this, I believe the shin was originally a sin, a thorn, since the Lexicon assigns it the meaning of “to draw out,” as we do when a thorn becomes embedded.

The parable is of a sheep caught in a thicket by thorns (sin) entangled in its wool, so that the shepherd uses his staff (lamed) to draw the sheep out of the thicket, thus restoring it to a state of well-being (hey). Moses is preaching the Gospel of grace from Genesis.

Besides the above, the chiastic structure of Vayechi contains a covert Messianic prophecy. The central axis says,

“Salvation” in the Hebrew is yeshuwah, Strong’s H3444, derived from ישע yasha, Strong’s H3467, a verbal root meaning “to save.” The pictographs are yud + shin + ayin.

The parable being told, is of actively (yud) and sharply, diligently (shin) watching out (ayin) for danger. We have carried over this same understanding in English from the Hebrew mother tongue, when we say, “Look sharp!” to mean, Look carefully without letting anything escape your notice. The concrete noun in between the verb “to save” and the abstract concept of “salvation,” is “shep-herd,” the one who rescues his flock.

Israel is prophetically blessing his seed, and at the center of that blessing is Yeshua, the Seed of Israel and the Seed of Promise. Israel and his seed will wait upon YHVH for the promise of His coming, of Gen 3:15 fulfilled.

“But as for you, you meant evil against me; but God meant it for good, in order to bring it about as it is this day, to save many people alive.” Gen 50:20

The statement of fact which Joseph makes in Gen 50:20 is a repeating theme, first mentioned by him in Gen 45:5.

“Now therefore do not be grieved, nor angry with yourselves, that you sold me here; for God sent me before you to preserve life.” Gen 45:5

In order to accomplish the saving of many lives, which Joseph sets as the greater good than his own personal comfort, he needed to go through many years of hardship, to position him in the right place at the right time.

Joseph’s life is a prophetic metaphor for the life and ministry of Messiah Yeshua, in that in Messiah’s first coming, He was to suffer and die, which the enemy meant for evil, but which was necessary for the saving of many lives. And in Messiah’s second coming, it will be to rule and reign, also foreshadowed by the life of Joseph as the ruler over all Egypt.

GENESIS 44:18-47:27 ANNUAL VAYECHI “AND HE LIVED” OUTLINE | GENESIS in CHIASTIC STRUCTURE
FINDING MESSIAH in TORAH: A MESSIANIC DISCOVERY THROUGH the TORAH PORTIONS
THE LAW of LOVE: THE GOSPEL of GRACE REVEALED in the COMMANDMENTS of GOD