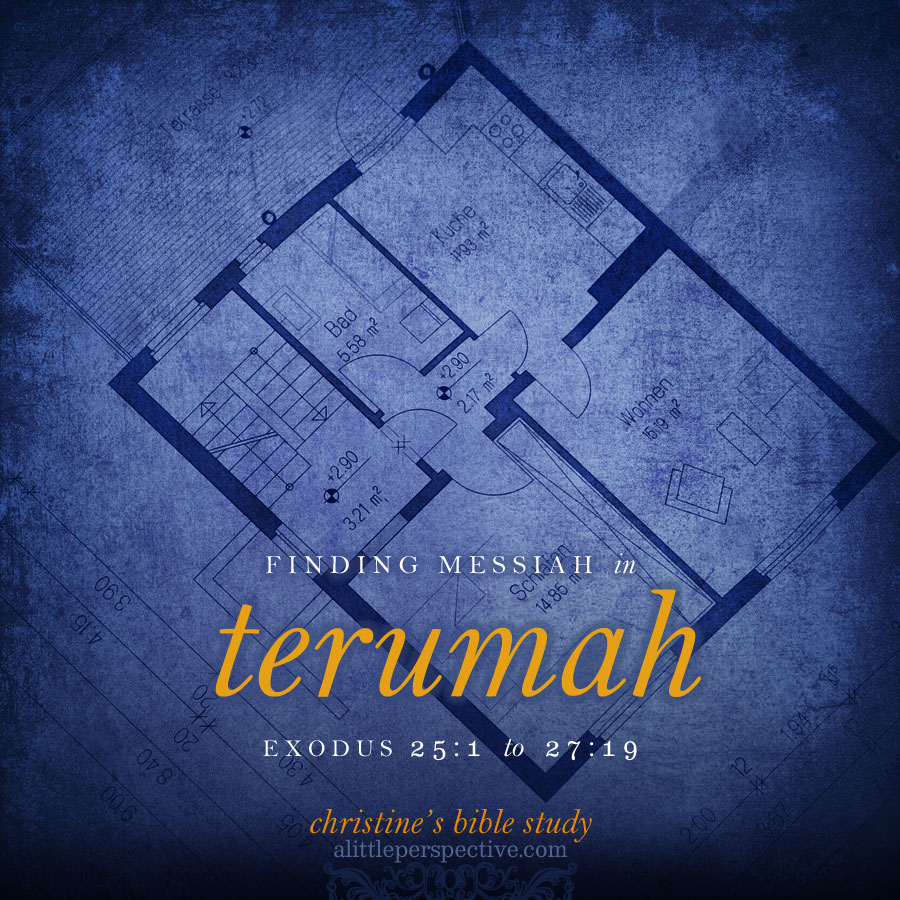 Then one of the seven angels who had the seven bowls filled with the seven last plagues came to me and talked with me, saying, “Come, I will show you the bride, the Lamb’s wife.” And he carried me away in the Spirit to a great and high mountain, and showed me the great city, the holy Jerusalem, descending out of heaven from God … But I saw no temple in it, for the Lord God Almighty and the Lamb are its temple. The city had no need of the sun or of the moon to shine in it, for the glory of God illuminated it. The Lamb is its light. Rev 21:9-10, 22-23

We think of the mercy seat as the reference to Messiah in these chapters. But in fact, every article of the tabernacle prophesies of Messiah. He is Emmanuel, God with us. The entire tabernacle is being built so that YHVH may dwell among His people. The tabernacle itself is a prophecy of Messiah, because through Him, God dwelt with man on the earth for the space of 30 years, and through Him and the Spirit which He poured out, God dwells within us, with His people.

The Ark of the Covenant

“Mercy seat” in Hebrew is kapporeth, Strong’s H3727. It is from the primitive 3-letter root כפר kaphar, kaph + pey + resh.

The story: Covering (kaph, as the father’s open palm covered the head of his son when conferring the blessing) the wound (pey, in the sense that a wound is an opening in the body) of man (resh). The Lexicons say it means to cover over or to make atonement. I cannot help but think of Noah’s two sons, who “covered over” their father’s nakedness and so preserved his honor and dignity. And whenever I think of that, I cannot help but think of Pro 17:9, “He who covers a transgression seeks love.”

For all have sinned and fall short of the glory of God, being justified freely by His grace through the redemption that is in Christ Jesus, whom God set forth as a propitiation by His blood, through faith, to demonstrate His righteousness … Rom 3:23-25

Propitiation: In Rom 3:25 and Heb 9:5, the Greek word hilasterion is used. It is the word employed by the Septuagint translators in Exo 25:17 and elsewhere as the equivalent for the Hebrew kapporeth, which means “covering,” and is used of the lid of the ark of the covenant (Exo 25:21 ; 30:6). This Greek word hilasterion came to denote not only the mercy-seat or lid of the ark, but also propitiation or reconciliation by blood. On the great Day of Atonement, the high priest carried the blood of the sacrifice he offered for all the people within the veil and sprinkled the mercy-seat with it, and so made propitiation.

The Table of Showbread

The bread of God resided on the table, and was renewed daily. Yeshua said, Man shall not live by bread alone, but by every word which proceeds from the mouth of God (Mat 4:4). Moreover, He is the Word made flesh (Joh 1:1, 14); He is the Bread of Life (Joh 6:35).

Lampstand is Strong’s H4501, menorah, a concrete noun meaning, “lampstand,” always used of the great lampstand in the tabernacle; from Strong’s H4500, manore, a concrete noun meaning “beam,” so for the cross bar that forms the yoke, the main shaft of the plow, and also the frame of a loom; from Strong’s H5214 ניר niyr, the primitive root meaning, “to break up the ground with a plow.” The ancient pictographs are nun + yud + resh.

The story: The seed (nun) is sown into the worked (yud) or plowed ground, where it has its beginning (resh) of life.

Yeshua teaches us that it is the Word which is the Seed sown into the plowed ground (Mar 4:1-25).

It is through faith in the shed blood of Messiah Yeshua that He has rained righteousness on us.

But now the righteousness of God apart from the Law is revealed, being witnessed by the Law and the Prophets, even the righteousness of God, through faith in Yeshua Messiah, to all and on all who believe. For there is no difference; for all have sinned and fall short of the glory of God, being justified freely by His grace through the redemption that is in Christ Jesus. Rom 3:21-24

Then Yeshua spoke to them again, saying, “I am the light of the world. He who follows Me shall not walk in darkness, but have the light of life.” Joh 8:12

The Curtains and Coverings for the Holy Place

Curtains of fine linen and animal skins covered the Holy Place. The coverings were not for the outer court. Interestingly enough, the righteous deeds of the saints are more than once compared to a fine linen garment, which is a covering.

Yehsua told the parable of the wedding for the king’s son, in which the servants brought in many from the highways and byways, as the invited guests were too busy to attend to the wedding feast:

So those servants went out into the highways and gathered together all whom they found, both bad and good. And the wedding hall was filled with guests. But when the king came in to see the guests, he saw a man there who did not have on a wedding garment. So he said to him, ‘Friend, how did you come in here without a wedding garment?’ And he was speechless. Mat 22:10-12

And to her it was granted to be arrayed in fine linen, clean and bright, for the fine linen is the righteous acts of the saints. Rev 19:8

The passage in Revelation is talking about the marriage supper of the Lamb, the King’s Son!

As well, the fine linen is itself covered over by an animal skin dyed red.

Also for Adam and his wife the Lord God made tunics of skin, and clothed them. Gen 3:21

Can the symbolism be more plain? YHVH God clothed Adam and Eve in an animal skin after they sinned. Now we learn that the animal skin was dyed red, immediately bringing to mind the blood of Yeshua which covers our sins.

One of the spiritual truths an earthly piece of furniture like the altar teaches us, is that sin is atoned for by blood. God accepts the blood of a substitute, instead of the blood of the sinner.

One of the spiritual truths the design of the earthly outer court teaches us, is that there is only one gate – one way – through which man may enter God’s atonement and His presence.

Yeshua said to him, “I am the way, the truth, and the life. No one comes to the Father except through Me.” Joh 14:6

There are many more prophetic signs of Messiah in these chapters!

EXODUS 25:1-27:19 ANNUAL TERUMAH “OFFERING” OUTLINE | EXODUS INDEX OF STUDIES
THE LAW OF LOVE: THE GOSPEL OF GRACE REVEALED IN THE COMMANDMENTS OF GOD