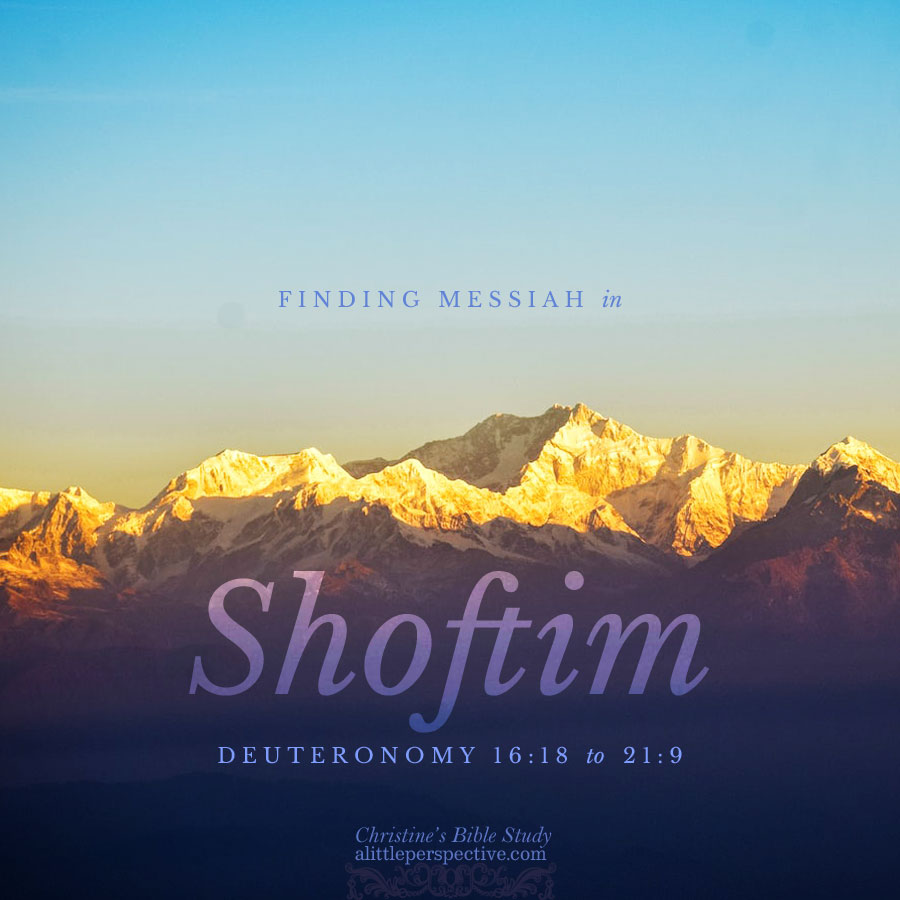 Another way to say the same thing: The blemished sacrifice shall not be put to death.

Messiah Yeshua was the unblemished sacrifice, who was put to death for the sins of the whole world.

If his offering is a burnt sacrifice of the herd, let him offer a male without blemish; he shall offer it of his own free will at the door of the tabernacle of meeting before YHVH. Then he shall put his hand on the head of the burnt offering, and it will be accepted on his behalf to make atonement for him. Lev 1:3-4

… you were not redeemed with corruptible things, like silver or gold, from your aimless conduct received by tradition from your fathers, but with the precious blood of Christ, as of a lamb without blemish and without spot. 1 Pet 1:18-19

The chiastic structure for Shoftim next reveals Messiah: 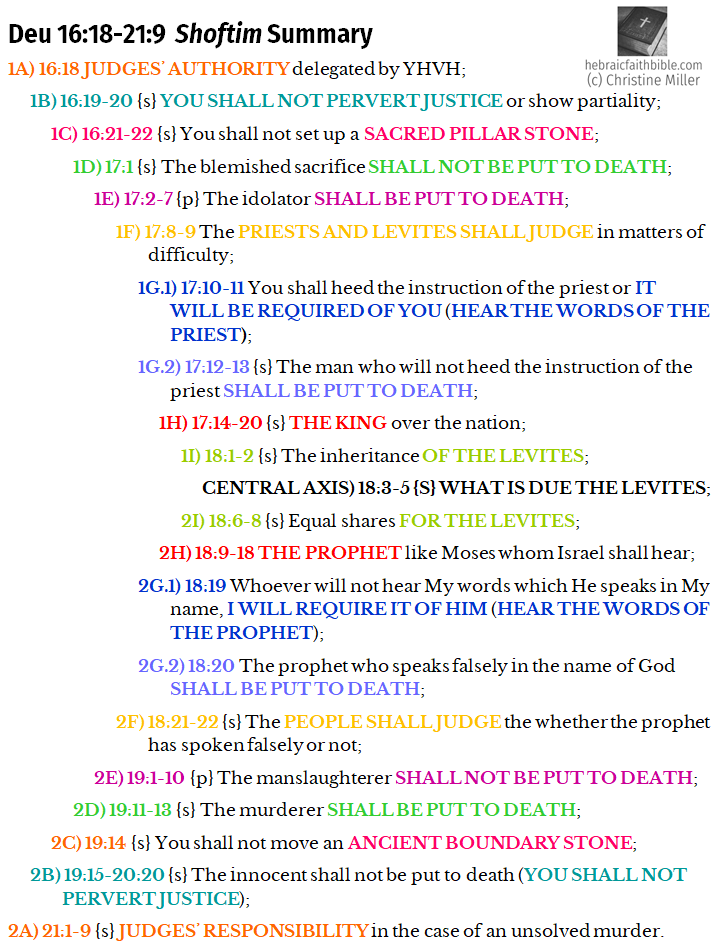 Look at the H pair of the chiastic structure summary.

We again have an instance of the pairs which are forced together by the surrounding elements, prophesying of Messiah. He is the coming King who shall rule the nation justly according to this Law, and He is the Prophet like Moses whom Israel is to hear.

It is Messiah Yeshua who is the Prophet like Moses whom YHVH will raise up for Israel from among Israel (Deu 18:15, in my Bible, “Prophet” here is capitalized, indicating a prophecy of Messiah). We have previously learned that Messiah will serve in the office of Priest, or mediator between God and men, and King (Melchizedek, a pre-incarnate appearance of Messiah Yeshua, was Priest of God Most High, and King of Salem – peace – and King of Righteousness, Gen 14:18). Now Scripture is teaching us that Messiah will also serve in the office of Prophet. Priest, Prophet, and King are the three national offices in which Messiah serves, wielding the authority of YHVH, and they are likewise the three national offices in which this reading is instructing us.

Once again commands to establish three cities of refuge, where the manslayer may flee and live to escape the avenger of blood. As we have seen so many times before, it is a prophecy of Messiah Yeshua, who is our City of Refuge. We have fled to Him, and have escaped the death our sins have decreed for us!

The final Hebrew paragraph of this section:

Note the elements of the heifer that has never been worked and on which a yoke has never come, and purfication or atonement from death. One of the most powerful teaching tools of Scripture are connections made by common themes, and here we have a clear thematic connection between the unworked heifer for atonement from unsolved murder, and the unworked red heifer of Num 19 for atonement from contact with death. The red heifer of Num 19 is a startling prophetic picture of Messiah, having the Messianic elements of hyssop, scarlet, and wood (also present in the Passover Lamb of Exo 12:21-22), rest from work (as painful toil is a consequence of sin, Gen 3:16-19), and purification or atonement from death (also a consequence of sin).

That is all very interesting, but what does it mean? Innocent blood on the ground “cries out” to YHVH God for justice (Gen 4:10); when the one who shed it pays for his crime with his own blood, the innocent blood is covered or atoned for (Gen 9:5-6). But until that day, the innocent blood continues to cry. If the murderer is never found or the sentence of justice never executed, then the blood guilt builds up in the land. Over time the cry becomes so great, that the Just Judge of the Whole Earth must act or He will no longer be just.

In the case of the Canaanites who were in the land before Israel, the land was cleansed of them (YHVH called Israel to cleanse the land of them). When the blood guilt of Israel became too great, the land was cleansed of them also (YHVH called Assyria and Babylonia to cleanse the land of them). To put away the guilt of innocent blood from the land, the elders and priests made atonement for the innocent blood with the heifer which had never been worked.

This commandment of Torah prophesies that Messiah, who is without blemish, will provide atonement for His people from the guilt of innocent blood, and purification from the defilement of death. God knew that we could not escape the Angel of Death by our own work or effort of obedience. In Messiah Yeshua He has provided a Passover Lamb, a Red Heifer of Purification, and a Heifer for Atonement from Death, to set us free from sin, work, death, and the judgment coming to us from them. HalleluYah! Therefore, repent, turn from the wicked way of shedding innocent blood, and of allowing the murderer to find refuge, and go, and sin no more.

DEUTERONOMY 16:18-21:9 ANNUAL SHOFTIM “JUDGES” OUTLINE | DEUTERONOMY INDEX of STUDIES
THE LAW of LOVE: THE GOSPEL of GRACE REVEALED in the COMMANDMENTS of GOD