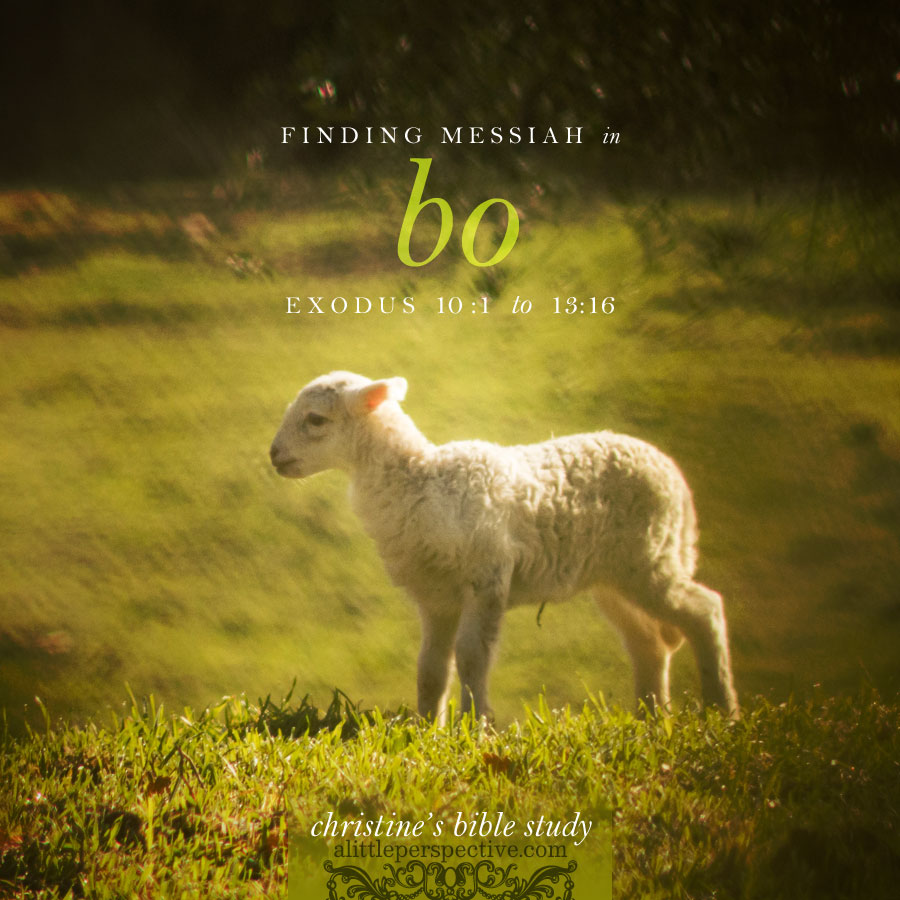 And Moses stretched forth his hand toward heaven; and there was a thick darkness in all the land of Egypt three days; they saw not one another, neither rose any from his place for three days; but all the children of Israel had light in their dwellings. Exo 10:22-23

Three is a sign of Messiah in Scripture, and this is the clue that this passage contains a prophecy, teaching, or instruction concerning Messiah. It is in fact a prophecy of the burial of Messiah, who remained in darkness, and did not rise from His place for three days.

The entire tenth plague is the most well-known Messianic prophecy in the Old Testament. In the beginning of YHVH’s contest with Pharaoh, before Moses performed any signs or any plagues had come upon Egypt, YHVH instructed Pharaoh,

“And you shall say unto Pharaoh, ‘Thus saith YHVH, “Israel is My son, even My firstborn, and I say unto you, ‘Let My son go, that he may serve Me.’ And if you refuse to let him go, behold, I will slay your son, even your firstborn.” Exo 4:22-23

Of course we know that Yeshua is the Son of God. Here we see Israel as a type of Messiah, just as Isaac was, and just as Joseph was.

Israel is also the one nation on the earth who served and worshipped YHVH—they were, and are, His people. He delivered them from bondage in Egypt. He did not deliver them from service, but from service to the Egyptians, to service to God, just as He has delivered us from bondage to the kingdom of darkness, to service and worship in the kingdom of His dear Son.

Exodus chapter 12 contains the instructions for how this deliverance for Israel was to be accomplished.

Matthew chapter 21 records Yeshua’s triumphal entry into Jerusalem. In the church, we commemorate that day as Palm Sunday. But in the year that Yeshua was crucified, it was the tenth day of the first month. Then the questions from the chief priests and authorities commenced, daily, through which He was shown to be a Lamb without blemish.

2) The lamb shall be killed at twilight on the fourteenth day of the first month.

In the year that Yeshua was crucified, He was crucified on the fourteenth day of the first month. Just as the priests were killing the Passover lambs in the Temple, Yeshua cried, “It is finished!” and breathed His last.

3) The lamb’s blood shall be applied to the doorposts and lintels of the houses.

“And the blood shall be to you for a sign upon the houses where you are; and when I see the blood, I will pass over you, and the plague shall not be upon you to destroy you, when I strike the land of Egypt.” Exo 12:13

The blood of Yeshua is a sign for us, that when YHVH sees His blood upon us, He will pass over us, and death shall not be on us to destroy us, as death is on the kingdom of darkness to destroy it.

The blood was applied to the doorposts of households by the fathers, and all who were within were saved from death, by his action as the head. Of course God saves individuals, and each person must make their own decision for Yeshua. But when His blood is applied to the household by the father, the children are painted with an enormous target for salvation on their spiritual heads. 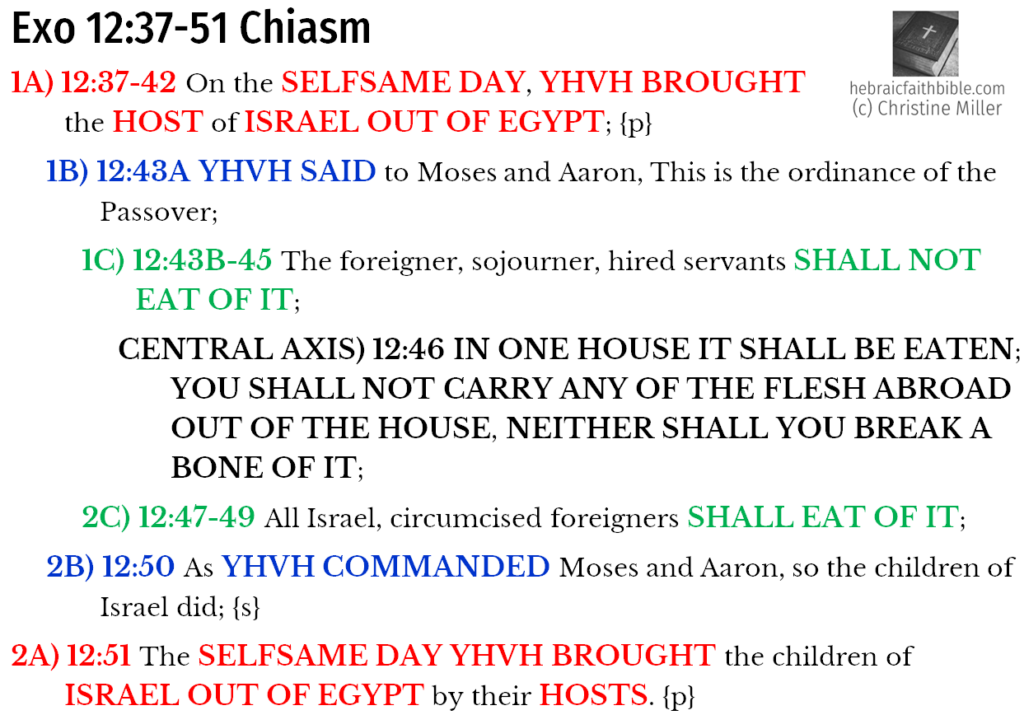 The central axis highlights that the bones of the Passover lamb shall not be broken.

I am poured out like water,
And all My bones are out of joint;
My heart is like wax;
It is melted within Me.
My strength is dried up like a potsherd;
And My tongue cleaves to my jaws;
And You have brought Me into the dust of death.
For dogs have encircled Me;
The assembly of the wicked have enclosed Me;
They pierced My hands and My feet.
I can count all My bones;
They look and stare upon Me.
They part My garments among them,
And cast lots upon My clothing. Psa 22:14-18

This Messianic psalm is prophetic of Yeshua’s crucifixion.

The Jews therefore, because it was the Preparation Day, that the bodies should not remain upon the cross on the Sabbath (for that Sabbath was a high day), asked Pilate that their legs might be broken, and that they might be taken away. Then the soldiers came and broke the legs of the first, and of the other who was crucified with Him. But when they came to Yeshua, and saw that He was dead already, they did not break His legs. Joh 19:31-33

The bones of the Passover Lamb were not broken. His crucifixion is the event which fulfills the feast day of Passover.

There is another prophecy of Messiah in the law of the firstborn, Exo 13:1-16. Three separate times in chapter 13 alone, YHVH commands that the firstborn be set apart to Him.

“Sanctify unto Me all the firstborn, whatever opens the womb among the children of Israel, both of man and of beast; it is Mine.” Exo 13:2

Three—a sign of Messiah in Scripture. The repetition draws our attention so that we don’t miss what Scripture is teaching.

EXODUS 1o:1-13:16 ANNUAL BO “GO” OUTLINE | EXODUS in CHIASTIC STRUCTURE
FINDING MESSIAH in TORAH: A MESSIANIC DISCOVERY THROUGH the TORAH PORTIONS
THE LAW of LOVE: THE GOSPEL of GRACE REVEALED in the COMMANDMENTS OF GOD