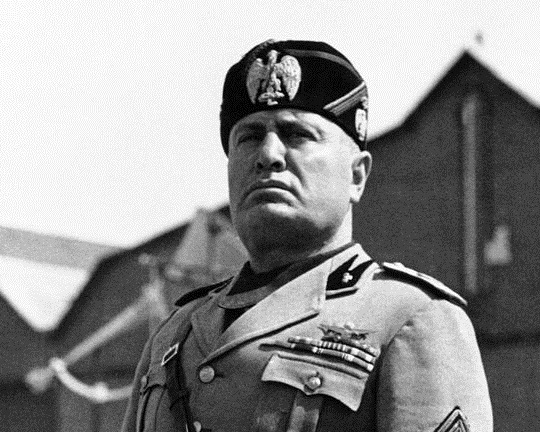 Are the commonly heard labels, “Hitler,” “Nazi,” and “Fascist” being accurately applied today? History will reveal it:

Mussolini, in his essay on Fascism in the Enciclopedia Italiana, begins by saying how a series of “amorphisms, anticipations, and aspirations” were welded by time into “an ordered expression of doctrine.” He sketches the history of Fascism by describing the things it combated: (1) Pacifism, (2) Marxian Socialism, (3) Liberal Democracy. “War,” he writes, “alone brings up to its highest tension all human energy and puts the stamp of nobility upon the peoples who have the courage to meet it.” He attacks the materialist conception of history: “Fascism, now and always, believes in holiness and heroism.” And as to democracy: “Fascism denies that the majority, by the simple fact that it is a majority, can direct human society; it denies that numbers alone can govern by means of a periodical consultation, and it affirms the immutable, beneficial, and fruitful inequality of mankind.”

His best passage is devoted to Fascism as the totalitarian expression of the state:

“No doctrine has ever been born completely new, completely defined, and owing nothing to the past. … The foundation of Fascism is its conception of the state, its character, its duty, and its aim. Fascism conceives of the state as an absolute, in comparison with which all individuals or groups are relative, only to be conceived of in their relation to the state. … The state, as conceived of and as created by Fascism, is a spiritual and moral fact in itself, since political, juridical, and economic organization of the nation is a concrete thing; and such an organization must be in its origins and development a manifestation of the spirit. …

“The Fascist state is unique, and an original creation. It is not reactionary, but revolutionary, in that it anticipates the solution of the universal political problems which elsewhere have to be settled in the political field by the rivalry of parties, the excessive power of the parliamentary regime and the irresponsibility of political assemblies; while it meets the problems of the economic field by a system of syndicalism which is continually increasing in importance, as much as the sphere of labor as of industry; and in the moral field enforces order, discipline, and obedience to that which is the determined moral code of the country.”

And he ends the essay by an urgent appeal to imperialism: ” For Fascism, the growth of empire, that is to say the expansion of the nation, is an essential manifestation of vitality.”

Already we can see that partisan claims of “Fascist” for President Trump and his supporters is completely out of line with reality. The President’s policies are designed to decentralize federal power and return power to states and individuals, the very opposite of Fascism. The President’s policies are designed to unchain the economy and restore greater abilities to business, labor, and the free market, the very opposite of Fascism. The President’s policy to build a strong military is not so that it will be used to pursue war, but so that it will deter others from waging war against America and Americans; “peace through strength,” the same policy employed by Teddy Roosevelt and Ronald Reagan.

Now that we have Mussolini’s, the creator of Fascist policy, political philosophy down, the next time we can look at what actually happened in Italy from the time he took power and instituted the Fascist state, until the time his reign was ended.