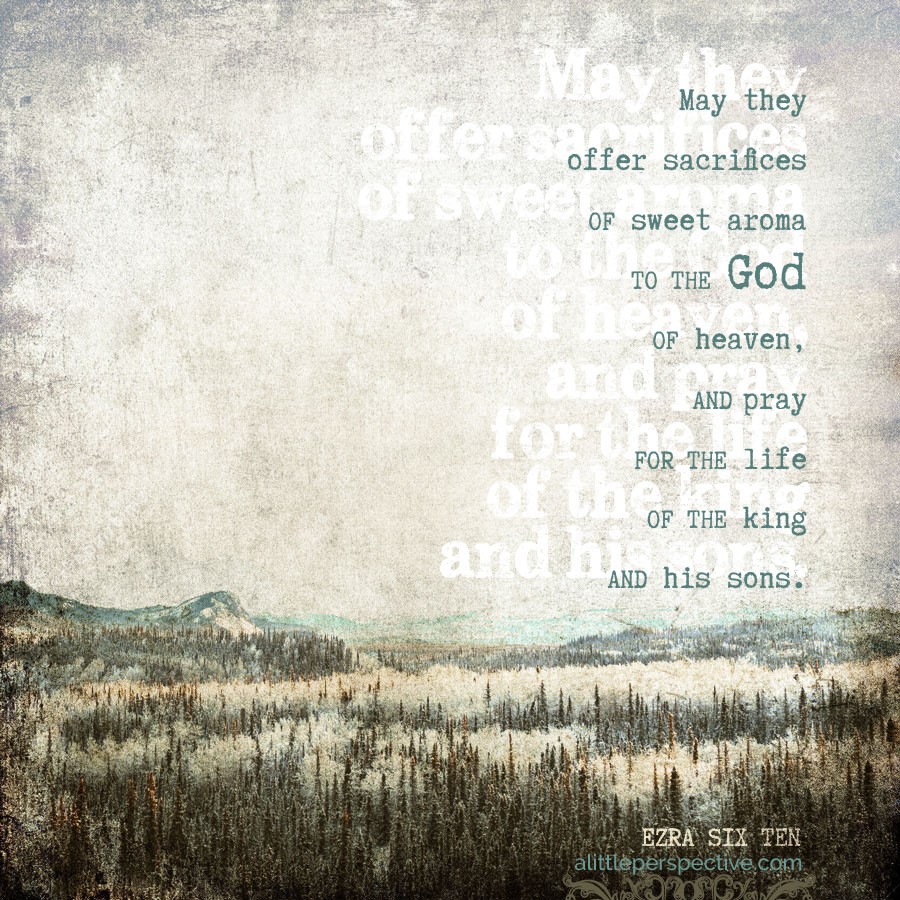 Read Ezra 5 and 6 at Bible Gateway.

Ezr 5:1 {s} Haggai + Zechariah prophesied to the Jews in Judah + Jerusalem
Ezr 5:2 {p} Zerubbabel + Jeshua began to build the house of God in Jerusalem
Ezr 5:3 {s} Tattenai the governor: Who has commanded you to build this temple + wall?
Ezr 5:4-5 {p} The elders answer/ they could not make them cease until a report could go to Darius
Ezr 5:6-7 {s} Tattenai the governor sent a letter to Darius the king thus:
Ezr 5:8 {s} We observed the temple of the great God being built diligently in Jerusalem
Ezr 5:9-10 {s} We asked by whose command they were building + the names of the elders
Ezr 5:11-12 {s} We are rebuilding our ancient temple, which the Chaldaeans destroyed
Ezr 5:13-15 {s} In the first year of Cyrus king of Persia, he issued the decree to build this house
Ezr 5:16-17 {s} Accordingly we laid the foundation/ let the king search to see if this is so
Ezr 6:1-2 {p} King Darius commanded a search of the archives/ a scroll was found thus:
Ezr 6:3-5 {s} In the first year of King Cyrus/ Let the temple at Jerusalem be rebuilt
Ezr 6:6-12 {p} Darius confirmed the decree and added a curse to those who hindered it
Ezr 6:13-15 {p} They provided for them according to the decree/ the house of God was completed
Ezr 6:16-18 {p} Israel celebrated the dedication of the house of God with joy
Ezr 6:19-22 {p} Israel kept the Passover/ Unleavened Bread with joy + YHVH made them joyful

1a) Ezr 5:1 {s} The prophets Haggai + Zechariah prophesied in the name of the God of Israel;
central axis) Ezr 5:2a, Zerubbabel + Jeshua began to build the house of God which is in Jerusalem;
2a) Ezr 5:2b {p} The prophets of God were with them, helping them;

1c) Ezr 5:3-12, Tattenai the governor questioned the Jews + sent a report to Darius, requesting a ruling;

1e) Ezr 5:17a, Therefore search in the king’s treasure house, which is there in Babylon;

central axis) Ezr 5:17b {s} Whether it is so that a decree was issued by King Cyrus to build this house of God at Jerusalem, and let the king send us his pleasure concerning this matter;

2d) Ezr 6:3-5 {s} The record of the decree of Cyrus commanding the house be rebuilt;

2c) Ezr 6:6-12 {p} The decree of Darius confirming the original decree of Cyrus;

2b) Ezr 6:13-14, They built + prospered through the prophesying of the prophets;

1a) Ezr 6:13, Tattenai the governor diligently did according to King Darius’ decree;
1b) Ezr 6:14a, So the elders of the Jews built;
central axis) Ezr 6:14b, They prospered through the prophesying of Haggai + Zechariah;
2b) Ezr 6:14c, And they built and finished it;
2a) Ezr 6:14d, According to the commandment of God + Cyrus, Darius, Artaxerxes king of Persia;

We saw, in Zec 13-14, that opposition, tests, trials, and challenges must rise up in the way of the people of God, because it is in being challenged, that we prove our loyalty to the LORD God, Creator of heaven and earth. Silver can only be refined by fire and under heat.

But what Satan meant for evil, God was able to turn it to bless His people. Darius not only confirmed Cyrus’ original decree, but provided for the building and the sacrifices from his own taxes that were collected in that region. The cost of the building was no longer coming from the pockets of the Jews.

The motive of the governor, in bringing the complaint in the first place, might have been to cause the building to cease. But the outcome of his complaint was that HE ended up providing for the building, and protecting the builders from any further interference.

So we do not need to fear whatever opposition arises. God is on His throne and nothing that happens to us takes Him by surprise. We can go a step further and rejoice in our trials, because through them God can increase blessing, provision and protection to us!

And we know that all things work together for good to those who love God, to those who are the called according to His purpose. Rom 8:28

What then shall we say to these things? If God is for us, who can be against us? He who did not spare His own Son, but delivered Him up for us all, how shall He not with Him also freely give us all things? Who shall bring a charge against God’s elect? It is God who justifies. Who is he who condemns? Rom 8:31-34