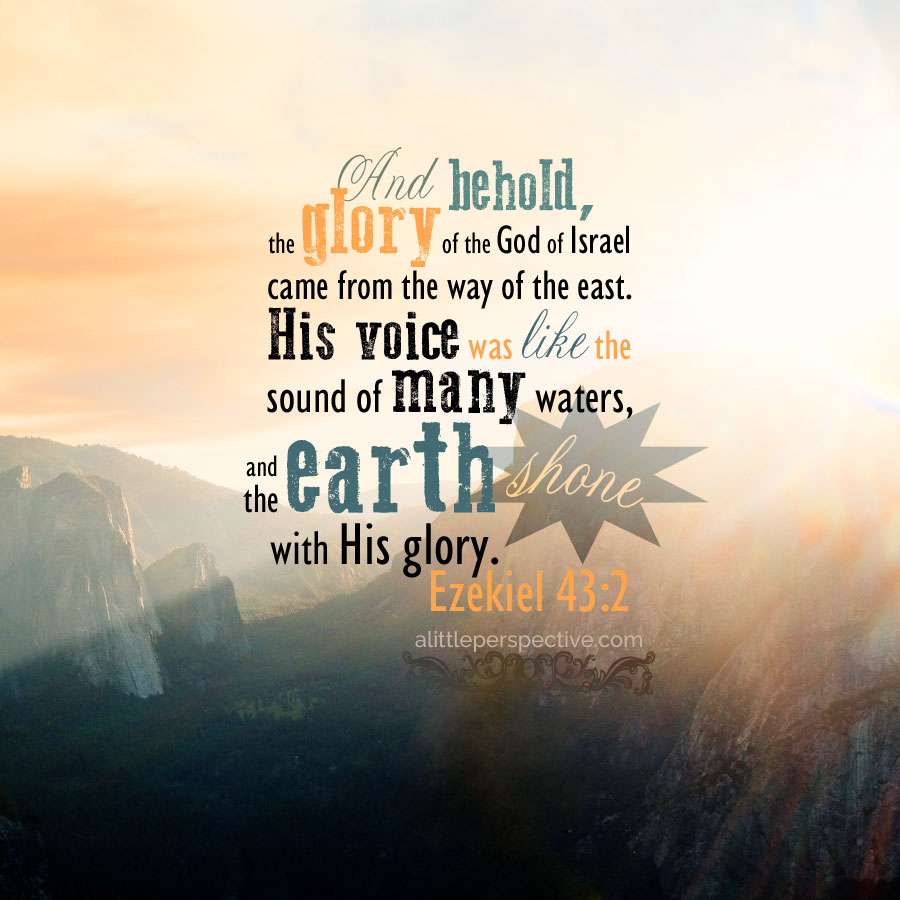 Read Ezekiel 43 and 44 at Bible Gateway.

Eze 40:1-43:9 {s} The measurements of the Temple/ the glory of YHVH entered by the east gateway
Eze 43:10-27a {s} The measurements + consecration of the altar
Eze 43:27b {s} On the eighth day and thereafter, the priest shall offer offerings + I will accept you
Eze 44:1-8 {s} East gateway shut, as the glory of YHVH entered by it/ admonition to maintain YHVH’s sanctity
Eze 44:9-14 {p} Temple duties + ordinances of the Levites who strayed from YHVH with idols
Eze 44:15-31 {p} Temple duties + ordinances for the priests, sons of Zadok, who were faithful to YHVH

When we were studying the plan of the Tabernacle in Exodus, that the LORD gave to Moses — detailed blueprints and measurements — and commanded him to build everything according to the pattern that he was shown, we learned that it was a representation in this natural world, of realities in the spiritual world. Its construction and plan prophesied truth of God’s dwelling with man. The Tabernacle and temple prophesy of Messiah, whose name Emmanuel means, God with us.

“But the priests, the Levites, the sons of Zadok, who kept charge of My sanctuary when the children of Israel went astray from Me, they shall come near Me to minister to Me; and they shall stand before Me to offer to Me the fat and the blood,” says the Lord GOD. Eze 44:15

Zadok is the name of a real priest in Israel’s history. He was descended from Eleazar the son of Aaron, and was high priest during David’s reign in Israel. That in itself is prophetic, because King David is a type of Messiah Yeshua in His second coming as King of kings. But also because the name Zadok means “righteous.” The Scriptures could also be translated as saying, that the priests, the sons of righteousness, shall come near Me to minister to Me.

But you are a chosen generation, a royal priesthood, a holy nation, His own special people, that you may proclaim the praises of Him who called you out of darkness into His marvelous light; 1 Pet 2:9

Peter says of believers in Messiah Yeshua, that they are a royal priesthood, and part of their priesthood is to proclaim the praises of Him. Is there a spiritual reality to offering the fat and the blood, that the natural practice of animal sacrifice illustrated and prophesied of? We don’t know, but as other Tabernacle practices were shadows cast by Messiah, which prophesied of things to come, it would make sense to me that there is. These are things that Messiah will teach us when He comes.

“In controversy they shall stand as judges, and judge it according to My judgments. They shall keep My laws and My statutes in all My appointed meetings, and they shall hallow My Sabbaths.” Eze 44:24

“Do not think that I came to destroy the Law or the Prophets. I did not come to destroy but to fulfill.  For assuredly, I say to you, till heaven and earth pass away, one jot or one tittle will by no means pass from the law till all is fulfilled. Whoever therefore breaks one of the least of these commandments, and teaches men so, shall be called least in the kingdom of heaven; but whoever does and teaches them, he shall be called great in the kingdom of heaven.” Mat 5:17-19

We are not saved by our obedience to the Torah. We have been set free from our guilty indictment that we have earned by breaking Torah, by the blood of Messiah Yeshua. But we have not been released from obedience to God, revealed as commandments, statutes, and judgments in Torah — rather, it is the new birth, the Spirit of God now dwelling in us, which empowers us to observe God’s statutes and judgments (Eze 36:25-27).

Church, let us be certain that we take all our faith and practice from the Word of God, and not the words of men. Know the Scriptures, so that we may not be deceived!