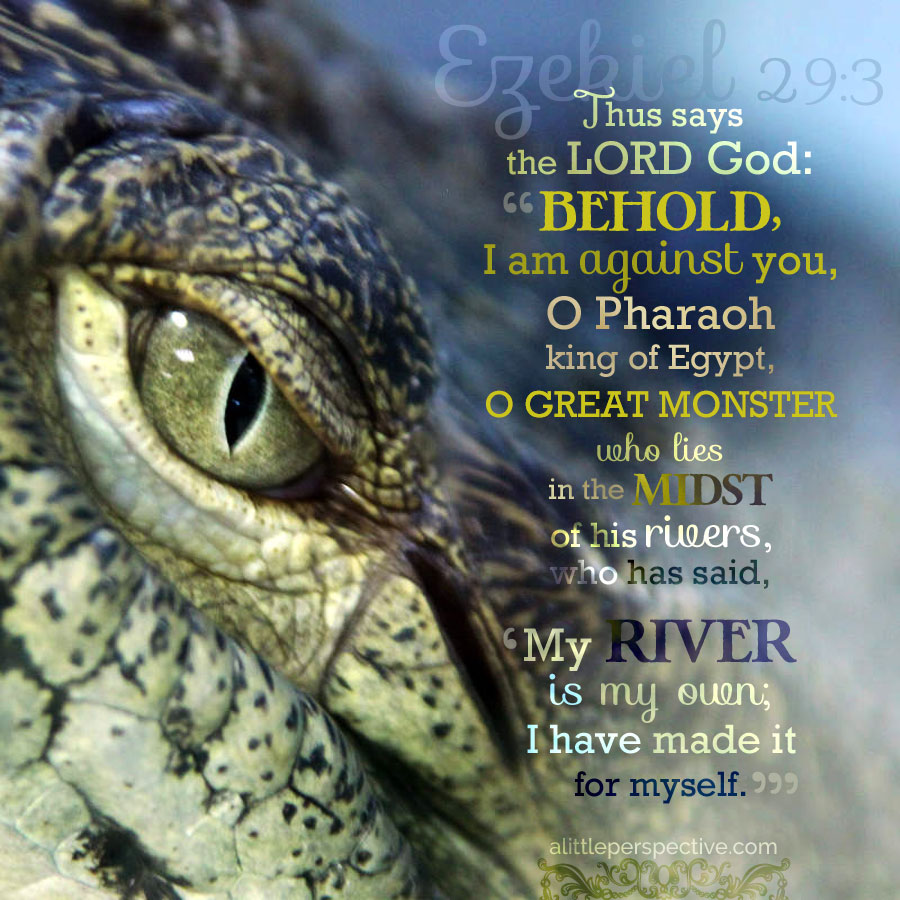 Read Ezekiel 28 and 29 at Bible Gateway.

Eze 28:1-5 {s} Prophecy against the prince of Tyre whose heart is lifted up
Eze 28:6-10 {p} Because you have exalted yourself as a god you will be slain as a man
Eze 28:11-19 {p} The lamentation for the king of Tyre, whose heart was lifted up/ eternal destruction
Eze 28:20-24 {p} The prophesy against Sidon: judgments executed in her midst, YHVH glorified
Eze 28:25-26 {p} The house of Israel regathered to dwell in safety in their land, when YHVH judges the nations
Eze 29:1-7 {s} The prophecy against Pharaoh king of Egypt, for he was a staff of reed to the house of Israel
Eze 29:8-12 {s} The sword upon the Egyptians, her cities desolate for 40 years, her people scattered to the nations
Eze 29:13-16 {p} After 40 years, her people regathered; Egypt the lowliest of kingdoms henceforward
Eze 29:17-18 {s} Nebuchadnezzar king of Babylon labored against Tyre but did not receive its wages
Eze 29:19-21 {p} Therefore YHVH will give him Egypt for the wages of his labor, for he worked for YHVH

central axis) Eze 27:28-32, The bitter lamentation for Tyre, destroyed in the midst of the sea;
2a) Eze 27:33-34, Tyre enriched many peoples but broken by the seas in their depths;

2c) Eze 28:6-10a, Because your heart as a god/ Nations against your wisdom in the midst of the seas, your death;

1a) Eze 28:16a, By the abundance of your trading you became filled with violence within;
1b) Eze 28:16b, And you sinned;
1c) Eze 28:16c, Therefore I cast you as a profane thing out of the mountain of God + destroyed you;
central axis) Eze 28:17a, Your heart was lifted up because of your beauty; you corrupted your wisdom for the sake of your splendor;
2c) Eze 28:17b, I cast you to the ground, I laid you before kings, that they might gaze at you;
2b) Eze 28:18a, You defiled your sanctuaries by the multitude of your iniquities;
2a) Eze 28:18b, By the iniquity of your trading;

Today’s prophecy is against the “prince of Tyre,” (Eze 28:1-10), and the “king of Tyre,” (Eze 28:11-19). They are two different entities. The prince of Tyre is a man, while the “king of Tyre” was in Eden, and an anointed covering cherub. Cherubim were the living creatures that Ezekiel saw in the beginning of his prophecies and visions — clearly not human. How can this be?

The king of Tyre is most likely a type for Lucifer, the most perfect of created beings, until the day that iniquity was found in him (Eze 28:15), most likely the sin of pride, of desiring to exalt himself as god and coveting God’s throne (Eze 28:2). He was cast out, and has since been named Satan, or “the adversary.” The prince of Tyre, then, clearly a man and not god, is a type of antichrist, who is influenced or possessed, even, by the king of Tyre, the adversary. The prince of Tyre will be slain as a man, and the king of Tyre will also be destroyed, devoured by fire brought from his midst (Eze 28:18).

Ah but there is a flaw in your reasoning Christine! The iniquity of the king of Tyre is the iniquity of the violence of his trading. I saw that too – that the trading of the king of Tyre was a matching pair for the trading of the city of Tyre, and it made no sense to me either. Whenever that happens, there is usually something lost in translation, and that was the case this time too.

Trading, or traffic, is in Hebrew Strong’s H7404, rekullah: trade, merchandise. But the root is Strong’s H7402, “to go about” … hence, as the going about is for the purpose of trading or merchandising, the term means a trader, or merchantman. But the root can also mean, going about for the sake of slander, and the Hebrew word for “slander” is very similar in form! A slanderer is what the adversary is: he tells lies about God, and he accuses the brethren with false accusations, to both God and man. Bearing false witness – one of the most lightly esteemed of the Ten Commandments, but as it is the sin of Satan, it ought not to be so.