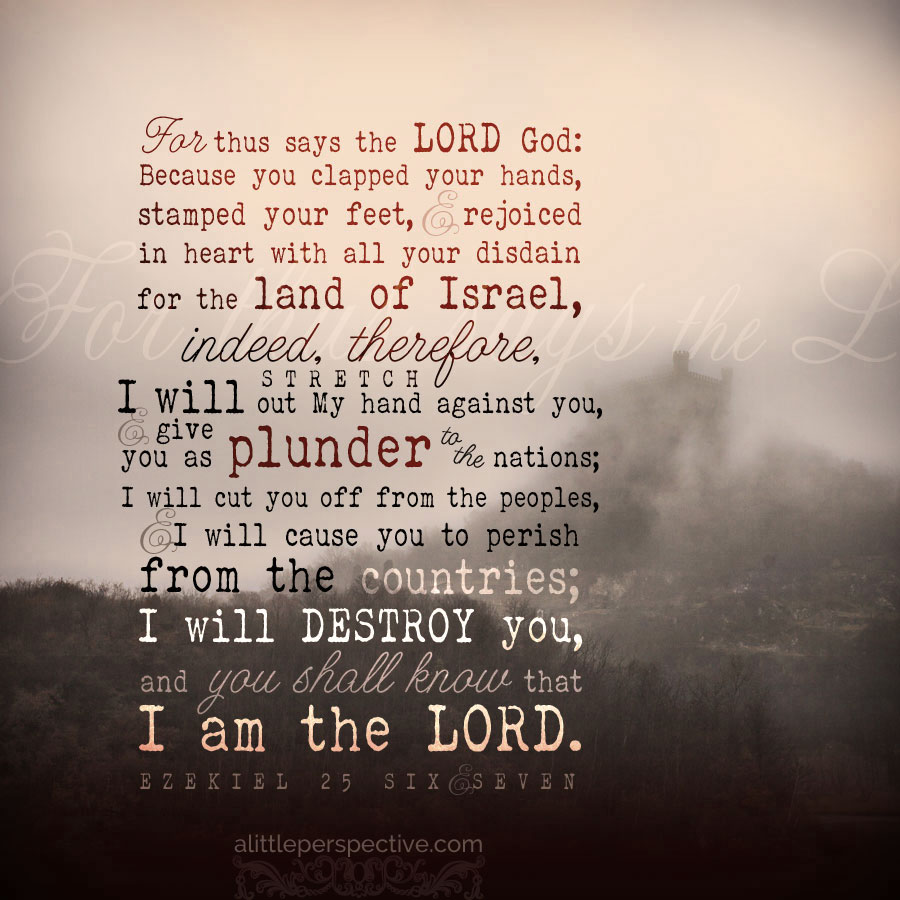 Read Ezekiel 24 through 26 at Bible Gateway.

Eze 24:1-5 {s} 9th year, 10th month, 10th day: the parable of the simmering pot
Eze 24:6-8 {p} Woe to the bloody city, for she boiled the blood with the meat, and did not pour it out to cover it
Eze 24:9-14 {p} Woe to the bloody city, make the fire hot, that her filthiness may be consumed
Eze 24:15-24 {s} The parable of the death of Ezekiel’s wife, as the destruction of the LORD’s house in Jerusalem
Eze 24:25-27 {p} When one who escapes the destruction tells Ezekiel, he shall no longer be mute
Eze 25:1-5 {p} The prophecy against the Ammonites, because they rejoiced at Judah’s desolation
Eze 25:6-7 {p} Because they rejoiced against the land of Israel, they will perish from the nations
Eze 25:8-11 {p} The prophecy against Moab: she shall be cleared of her cities + given to the East
Eze 25:12-17 {s} The prophecy against Edom + Philistia, because they took vengeance on Judah
Eze 26:1-6 {p} Prophecy against Tyre: nations shall come against you, break down your walls
Eze 26:7-14 {s} Nebuchadnezzar shall come against Tyre/ she shall not be rebuilt
Eze 26:15-18 {s} The lament of the princes of the sea over the destruction of Tyre
Eze 26:19-21 {p} YHVH to make Tyre a desolation/ descent to the Pit, never to be inhabited again

Eze 26 is the beginning of the prophecy against Tyre (which is concluded in Eze 27 and 28). This chapter is one the skeptics use to say that the biblical prophecies are inaccurate, because these prophecies were never fulfilled the way the Bible says they will be. But if we look at them with the teaching tools of Scripture, some interesting truths surface that would otherwise be missed.