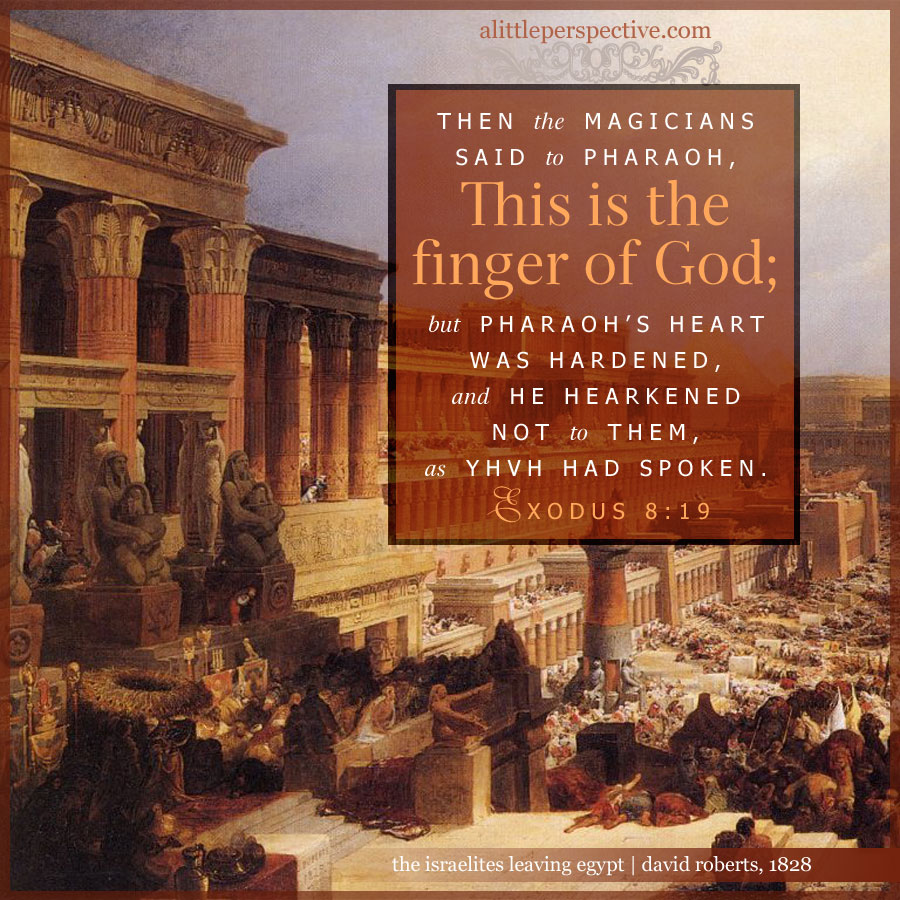 1 And the LORD Yehovah spoke to Moses: “Go in to Pharaoh, and say to him: Thus says the LORD: Let My people go, that they may serve Me. 2 And if you refuse to let them go, behold, I will smite all your borders with frogs. 3 And the river shall swarm with frogs, which shall go up and come into your house, and into your bedchamber, and on your bed, and into the house of your servants, and on your people, and into your ovens, and into your kneading bowls. 4 And the frogs shall come up both on you, and on your people, and on all your servants.” 5 And the LORD said to Moses: “Say to Aaron: Stretch forth your hand with your rod over the rivers, over the canals, and over the pools, and cause frogs to come up on the land of Egypt.” 6 And Aaron stretched out his hand over the waters of Egypt; and the frogs came up, and covered the land of Egypt. 7 And the magicians did in like manner with their secret arts, and brought up frogs on the land of Egypt. 8 Then Pharaoh called for Moses and Aaron, and said: “Entreat the LORD, that He take away the frogs from me, and from my people; and I will let the people go, that they may sacrifice to the LORD.” 9 And Moses said to Pharaoh: “Have this glory over me; what time shall I entreat for you, and for your servants, and for your people, that the frogs be destroyed from you and your houses, and remain in the river only?” 10 And he said: “For tomorrow.” And he said: “Be it according to your word; that you may know that there is none like the LORD our God Elohiym. 11 And the frogs shall depart from you, and from your houses, and from your servants, and from your people; they shall remain in the river only.” 12 And Moses and Aaron went out from Pharaoh; and Moses cried to the LORD concerning the frogs, which He had brought on Pharaoh. 13 And the LORD did according to the word of Moses; and the frogs died out of the houses, out of the courts, and out of the fields. 14 And they gathered them together in heaps; and the land stank. 15 But when Pharaoh saw that there was a respite, he hardened his heart, and hearkened not to them; as the LORD had spoken. {s}

20 And the LORD Yehovah said to Moses: “Rise up early in the morning, and stand before Pharaoh; lo, he will come forth to the water; and say to him: Thus says the LORD: Let My people go, that they may serve Me. 21 Else, if you will not let My people go, behold, I will send swarms of flies upon you, and upon your servants, and upon your people, and into your houses; and the houses of the Egyptians shall be full of swarms of flies, and also the ground on which they stand. 22 And I will set apart in that day the land of Goshen, wherein My people dwell, that no swarms of flies shall be there; so that you may know that I am the LORD in the midst of the earth. 23 And I will put a division between My people and your people–by tomorrow shall this sign be.” 24 And the LORD did so; and there came grievous swarms of flies into the house of Pharaoh, and into his servants’ houses; and in all the land of Egypt the land was ruined by reason of the swarms of flies. 25 And Pharaoh called for Moses and for Aaron, and said: “Go, sacrifice to your God Elohiym in the land.”’ 26 And Moses said: “It is not seemly so to do; for we shall sacrifice the abomination of the Egyptians to the LORD our God; lo, if we sacrifice the abomination of the Egyptians before their eyes, will they not stone us? 27 We will go three days’ journey into the wilderness, and sacrifice to the LORD our God, as He shall command us.” 28 And Pharaoh said: “I will let you go, that you may sacrifice to the LORD your God in the wilderness; only you shall not go very far away; entreat for me.” 29 And Moses said: “Behold, I go out from you, and I will entreat the LORD that the swarms of flies may depart from Pharaoh, from his servants, and from his people, tomorrow; only let not Pharaoh deal deceitfully any more in not letting the people go to sacrifice to the LORD.” 30 And Moses went out from Pharaoh, and entreated the LORD. 31 And the LORD did according to the word of Moses; and He removed the swarms of flies from Pharaoh, from his servants, and from his people; there remained not one. 32 And Pharaoh hardened his heart this time also, and he did not let the people go. {p}

The Plagues and the Exodus – Dr. David Livingstone