You are here: Home / Bible Study / bible for beginners / Exodus 7 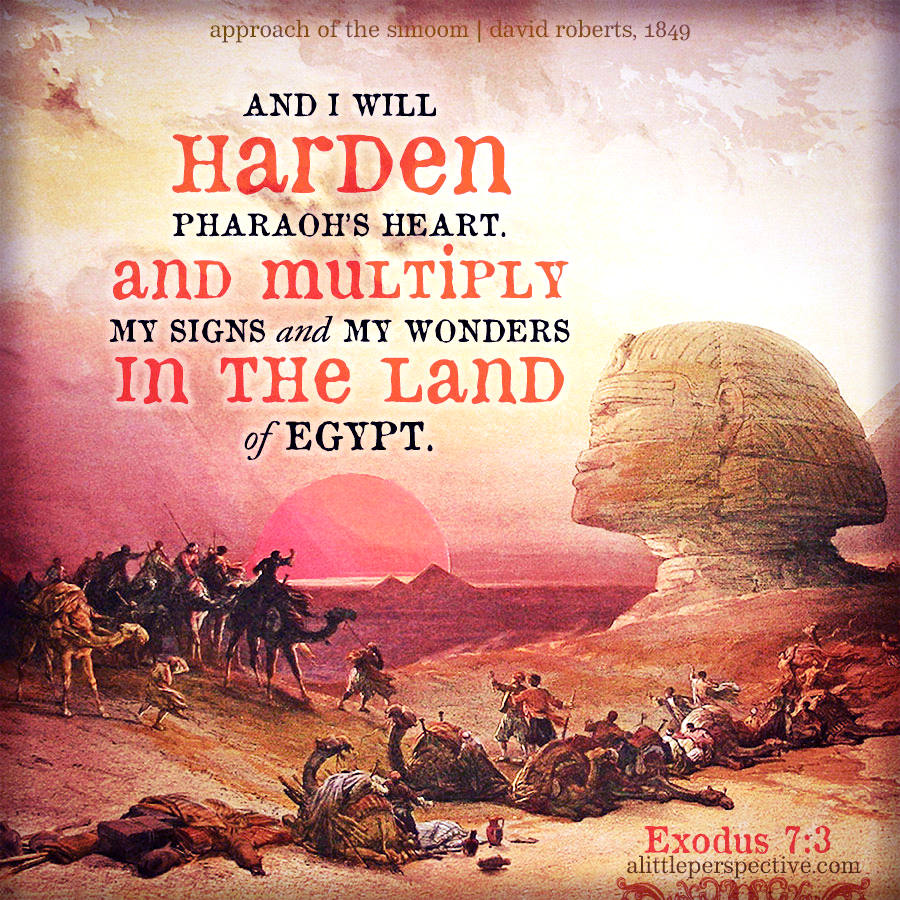 Now the teaching tool of the Hebrew paragraph divisions really shine in today’s reading! The next strong theme is:

The first paragraph, Exo 7:1-7 {p}, is a summary of what will happen in the next several chapters. God will tell Moses what He commands. Aaron will speak to Pharaoh for Moses. God will harden Pharaoh’s heart and he will not listen. God will multiply His signs and wonders in Egypt, so that he will bring out the hosts of His people by great judgments. And in the end,

“And the Egyptians shall know that I am YHVH, when I stretch out My hand on Egypt and bring out the children of Israel from among them.” Exo 7:5

God is going to reveal who He is, who YHVH is, to Pharaoh and to the Egyptians (and presumably, to Moses and Israel as well) in the events culminating in Israel’s great deliverance. Remember that Pharaoh declared he did not know who YHVH was. Remember that God revealed to Moses that Abraham, Isaac, and Jacob knew God as El Shaddai, but not as YHVH; He emphasized to Moses that He was going to reveal what “I am YHVH” means. So let’s pay close attention also!

This is not surprising. This first plague is different in its paragraph divisions from the other plagues which follow, and the reason is, the Bible is teaching us what “I am YHVH” means. The first {s} paragraph reveals that God spoke His word and His command to Pharaoh. God moreover confirmed that it was His word and His command by the sign of the rod becoming a serpent. So God made His will known to the unbelievers, and He confirmed that it was His will to the unbelievers. He gave them an opportunity to repent and to obey. Nothing bad happened to the land of Egypt as yet.

In the next {s} paragraph, God repeated His word and His command with a stronger warning and a judgment to follow if He is not heeded. The fact that the {s} paragraph ends after the instruction, and before anything else happens, reveals that God gave an opportunity to the unbelievers to repent and obey, before the plague actually came upon them.

The final {p} paragraph of this section completing the Strong Theme, is the actual accomplishment of the judgment warned of. This reveals that YHVH accomplishes His word — as we have learned in God’s dealings with Abraham, Isaac, and Jacob in Genesis, but which the Egyptians do not know, and perhaps even the Israelites of this generation do not know.

Do you see how fair God is being with those who do not know Him? The Egyptians could still get water by digging. So the judgment increased their inconvenience, but it was not life- threatening. Pharaoh could at any time end the inconvenience to his people, by repenting and obeying.

7:8-25 {s+s+p} Strong Theme: YHVH begins to reveal who He is as the river becomes blood

If there are questions, this is a good resource:

The Plagues and the Exodus – Dr. David Livingston