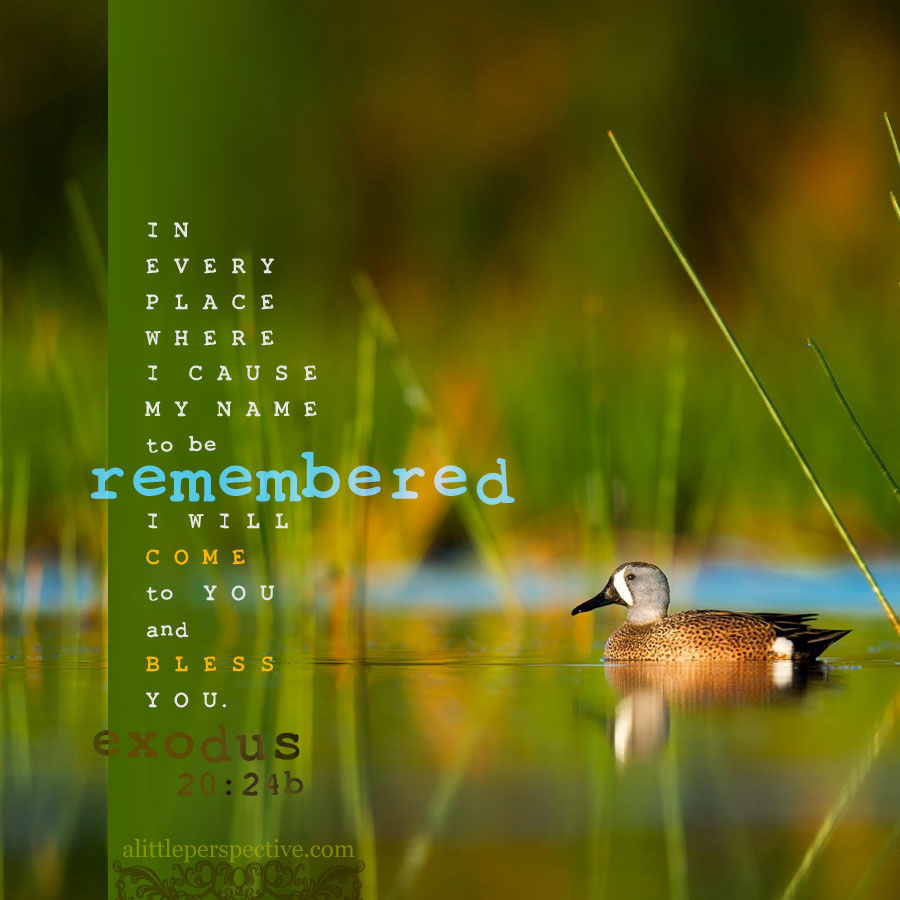 The roots previously studied are linked.

Exo 20:22 22 And YHVH said to Moses, “Thus you shall say to the children of Israel: ‘You yourselves have seen that I have talked with you from heaven. 23 You shall not make anything with Me—gods of silver, or gods of gold, you shall not make for yourselves. 24 An altar of earth you shall make for Me, and shall sacrifice on it your burnt offerings, and your peace offerings, your sheep, and your oxen; in every place where I cause My name to be remembered I will come to you and bless you. 25 And if you make Me an altar of stone, you shall not build it of hewn stones; for if you lift up your tool on it, you have profaned it. 26 Neither shall you go up by steps to My altar, that your nakedness may not be uncovered on it.’ ” {p}

Heaven is Strong’s H8064 shamayim, a concrete noun meaning, “heaven;” according to Strong’s, it is the dual of an unused singular concrete noun, shameh שמה; itself from an unused primitive root שמי meaning, “to be lofty.” Thus shamayim denotes “the sky as aloft; the dual perhaps alluding to the visible arch in which the clouds move, as well as to the higher ether where the celestial bodies revolve.” The ancient pictographs of the primitive root are shin + mem + yud.

To sacrifice is Strong’s H2076 זבח, zabach, a primitive root meaning, “to sacrifice.” The ancient pictographs are zayin + bet + chet.

Animals were slaughtered for the family’s use with a knife (zayin, as the tool appropriate for the job) beyond the home’s (bet) wall (chet), which separated the home from the outside world.

In ancient times when captives were taken as a spoil of war, they were first closely watched (ayin) to prevent their free movement or escape. To take them into exile, they were bound together by a yoke (lamed, as the yoke is a specialized staff) which was lifted up (hey, in the context of the upraised arms) on their shoulders. The primitive root then, is to go up or ascend, as the yoke ascends onto the shoulder of the captive. The whole burnt offering is from the idea of the smoke of the burning ascending up.

Peace offerings is Strong’s H8002, shelem, a concrete noun meaning, “remuneration, reward, thanksgiving offering;” from Strong’s H7999 שלם shalam, a primitive root, “to be in a covenant of peace.”

The related words will help us find the story. The verb is “to arise,” and the concrete noun is a standing grainstalk. Other words are a stand, a height, or a decree as a standing word. A stalk or a plant arises and stands up when it gathers (quph, as light leaves the earth and sky to be gathered to the sun when it is on the horizon) to itself (vav, in the context of adding) water (mem) drawn up from the root. The concept of place, then, is from the idea of a higher elevation to which one aspires.

The story being told is of the breath (shin, as that which passes through the teeth) which hooks (vav) water (mem, in the form of vapor) with it and is expelled from the body to the outside; just so a man’s character is outwardly expressed from that which is within his heart. In Hebraic thought someone’s name is more than a simple designation, it is appointed to him as expressive of his character and destiny. We retain this idea in our modern day, when we say that someone’s name has been drug through the mud, meaning that his character and reputation has been dirtied by either by the slander of others or by his own wicked deeds.

To come is Strong’s H935 בוא bo, a primitive root meaning, “to come in, to enter.” The ancient pictographs are bet + vav + aleph.

The story being told is of space within (bet) leaving a vacuum, so that what comes next (vav) has the power (aleph) to fill it.

“[Bo is] a generic verb with a wide application meaning to come or go as a filling of a void.”

Tool is Strong’s H2719, chereb, a concrete noun meaning, “sword, knife, or tool;” from Strong’s H2717 חרב charab, a primitive root meaning, “to be dried up, to lay waste,” or “to be laid waste.” The ancient pictographs are chet + resh + bet.

In times past animals were slaughtered for the family’s use, for meat, hides, glue, and even the bone was used. The labor of slaughter was done outside (chet) by the man (resh) for the benefit of the houshold (bet) using a sword, knife, or or other tool appropriate for the job.

To profane is Strong’s H2490 חלל  chalal, a primitive root meaning, “to profane.” The ancient pictographs are chet + lamed + lamed.

A hole is drilled with a tool called a bow drill. The string of the bow is wrapped around the drill. By moving the bow back and forth, and firmly pressing down, the drill spins around drilling the hole.

In the patriarchal era, a string or sinew was wrapped around (chet, as a wall surrounds a house) the drill (lamed, as the drill is a long stick with a sharpened end), in order to bore a hole into wood or stone. Holes were bored into stone to give a place of egress for chisels or other tools to do their work of shaping the stone for whatever purpose man has determined for it (lamed, in the sense of man’s authority exercised over the stone).

This is the everyday, common, or profane use of the bow drill and the stone, in service of the man’s daily work and responsibilities. YHVH seems to be saying that when man exercises authority over the stones which comprise His altar, then he has made it common, or profaned something which ought to be set apart or holy to YHVH.

To go up is Strong’s H5927 עלה alah, a primitive root meaning, “to go up, to ascend.” It is the primitive root for olah, the whole burnt offering, and is defined above.

To uncover is Strong’s H1540 גלה galah, a primitive root meaning, “to uncover.” The ancient pictographs are gimel + lamed + hey.

This word shares a verbal root with Strong’s H5927, alah, “to go up, to ascend.” We saw that it began as a root describing captives gathered together (gimel) upon whose shoulders the yoke (lamed) was raised up (hey) as spoils of war. Captives were most commonly stripped of their clothing when put into their yokes for transport.

Tomorrow, if YHVH is willing, we will look at several chiastic structures which are revealed from the Hebrew roots. ♥