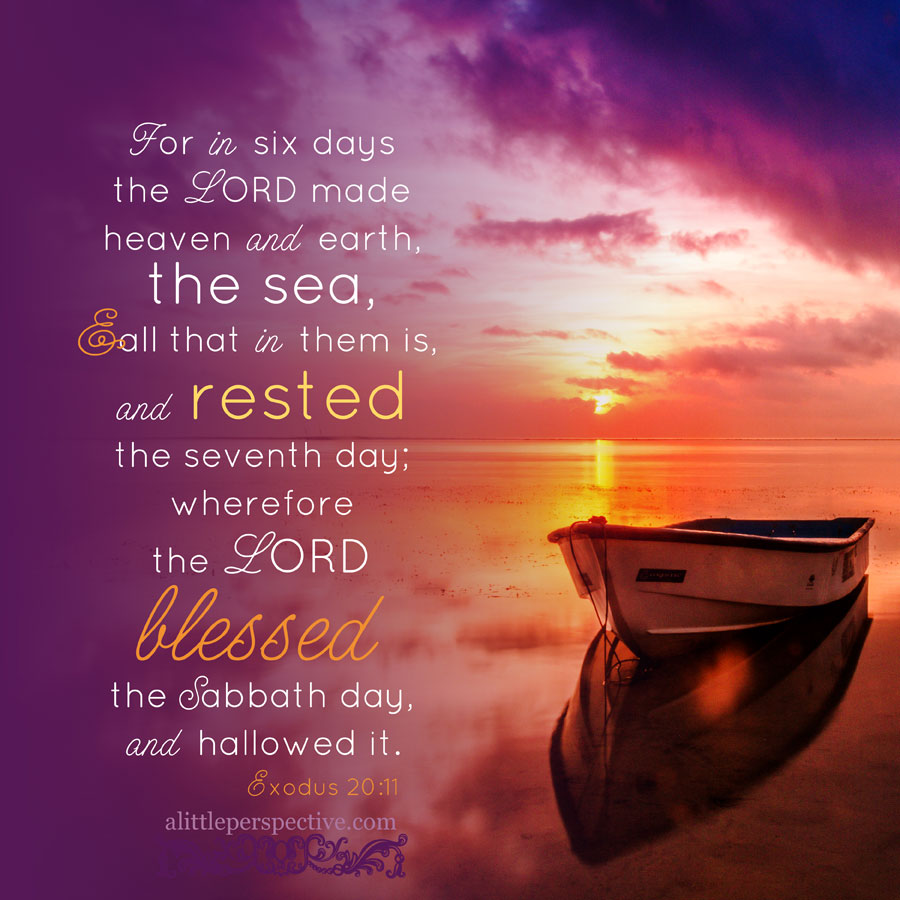 The story the ancient Hebrew pictographs are telling, is of pressing in (shin) to home (bet), for work in ancient times was done in the fields, so when one returned home, it was because the work was done for the day and it was time to sit and rest. When one pressed in to home, when one ceased from labor and took their rest, that action is a sign or signal (tav) that marked that person.

And YHVH spoke to Moses, saying, “Speak also to the children of Israel, saying: ‘Surely My Sabbaths you shall keep, for it is a sign between Me and you throughout your generations, that you may know that I am the Lord who sanctifies you.” Exo 31:12-13

Holy is Strong’s H6944 qodesh, a concrete noun meaning, “a sacred place or thing,” from Strong’s H6942 קדש qadash, a primitive root meaning, “to be holy.” We have seen this word before.

Sabbath is Strong’s H7676, Shabbath, the same as above.

Six days you shall gather it; but on the seventh day is the Sabbath, in it there shall be none. Exo 16:26

The verbal root having the same pictographs is Strong’s H7650, “to swear,” which we have seen before. Its story is that which passes through the teeth (shin, i.e., spoken words) which the family (bet, not just those who share the same tent, but also the entire extended family) will watch over (ayin) to ensure compliance. Its connection to the number seven, sheba, is that “to swear an oath” meant literally, “to seven oneself,” as seven was a sacred number throughout the ancient world, and the oath would be repeated seven times, or given with seven sacrifices, or witnessed with seven witnesses and pledges, as a testament to the sincerity of the oath-taker.

And YHVH said to Moses: “How long will you refuse to keep My commandments and My laws? Exo 16:28

Refuse is Strong’s H3985 מאן ma’en, a primitive root meaning, “to refuse.” We have seen this word before.

To keep is Strong’s H8104 שמר shamar, a primitive root meaning, “to keep, to watch, to guard as a husbandman or shepherd.” The Ancient Hebrew Lexicon tells us that the shin + mem in this root were originally a sin + nun, the similar sounds becoming transposed over time. So the ancient pictographs were sin + nun + resh.

Shepherds would surround their flocks at night with thorn branches to protect them from predators when they were pasturing them away from the fold. They kept or guarded their flocks so that their children would be provided for. Thus shamar is to closely guard (sin) for the next generation(nun) that which is of first importance (resh).

Commandment is Strong’s H4687, mitsvah, a concrete noun meaning, “commandment.” We have seen this word before.

Law is Strong’s H8451, torah, a concrete noun meaning, “instruction, teaching.” We have seen this word before.

“See that YHVH has given you the Sabbath; therefore He gives you on the sixth day the bread of two days; abide every man in his place, let no man go out of his place on the seventh day.” Exo 16:29

Given is Strong’s H5414 נתן nathan, a primitive root meaning, “to give.” The ancient pictographs are nun + tav + nun.

God chose to use two seeds surrounding the sign, the mark, to mean, “to give.” The first time the seed appears in Scripture, God has, on the third day of creation, hidden the seed in the ground, so that it will grow and produce fruit, which contains seed within itself also.

That is the picture of giving. Giving is like planting seed, and there is the meaning of the Hebrew. Giving (nun, the seed) is like (tav) planting a seed (nun). What you give will grow and produce fruit; and not just any fruit, but fruit of the same kind as the seed. When the fruit is produced, we take the seed within it, and plant it, that is, give it, again.

Abide is Strong’s H3427 ישב yashab, a primitive root meaning, “to sit down, to dwell.” The ancient pictographs are yud + shin + bit.

The story the ancient pictographs are telling is that when work (yud) is ended, we press (shin) into the house (bet), to sit down at the end of our day of labor.